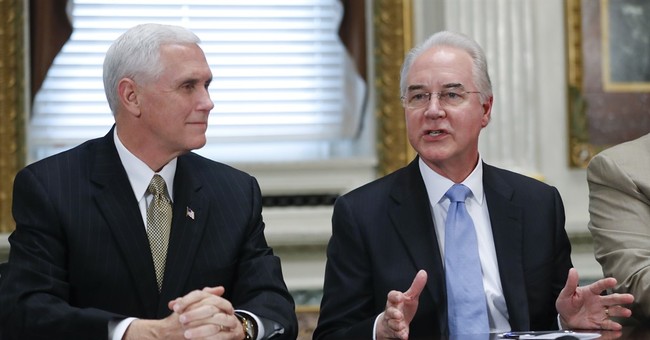 Ever since support for AHCA 1.0 among House Republicans went down the tubes and the bill was yanked, the White House has been working to forge a compromise with the recalcitrant House Freedom Caucus. As we've covered, Vice President Pence has been central to those efforts, with GOP leadership seeking to create an environment in which these talks may result in a constructive outcome -- namely, no bold predictions, and no urgent timelines. The Hill is reporting that the HFC chairman believes that his group may be getting close to reaching that elusive political bargain:

The leader of the House Freedom Caucus says Republicans are "close" to agreement on a plan to repeal ObamaCare, indicating that discussions are still continuing while Congress is in a two-week recess. Rep. Mark Meadows (R-N.C.) on Tuesday told a local radio station that he expects to hear back from Speaker Paul Ryan (R-Wis.) by noon about "two options" on the table. He did not elaborate. "We're very close. The biggest thing for all of us is we want to make sure we don't just have repeal, but we have a replacement that drives down insurance premiums," he said..."It's our encouragement to have a vote as soon as we possibly can, even perhaps before we return back to DC in 13 days." While House Majority Leader Kevin McCarthy (R-Calif.) has warned that members could be called back from recess early to vote on healthcare if a deal emerges, it appears unlikely.

Like John Sexton, I'd call it highly unlikely. Even if a deal is struck with the right flank of the party, moderate members aren't going to rush back to DC to blindly vote on an amended bill. Leadership is going to need to listen to and address objections and concerns from that element of the conference, too -- which could conceivably lead to additional changes that, in turn, re-alienate the HFC crew. As we mentioned last week, one alteration that seemed to garner consensus support was the injection of billions of new dollars into a risk pool stabilization fund designed to bring down premiums in the short term. The CBO's (partially flawed) score of the original bill projected lower rates several years into implementation after an initial bump; this amendment was crafted to alleviate that political and policy problem.

But the big sticking point is the degree to which the legislation would allow states to waive certain federal mandates under Obamacare, especially "community rating," wherein sick consumers cannot be charged substantially more for coverage than healthy ones. For many in the centrist GOP camp, gutting that safeguard is a political liability. It's true that broad federal mandates drive up costs, and allowing states flexibility to seek waivers could result in the flourishing of more options for consumers, many of them significantly cheaper. But members in tough districts recognize that Democrats will frame those changes as "allowing insurers to discriminate against the sick." That's why moderates could complicate the whip count if the bill ends up looking too risky for Republicans representing contested districts:

The attempt to move the bill further to the right threatens to erode support among moderate members who were turned off by the previous version of the American Health Care Act. “While we haven’t picked up any votes yet, this concept is already showing signs of losing a ton of them,” a senior Republican source said. Centrist Rep. Leonard Lance (R-N.J.) indicated he is still a no on the healthcare bill and warned against allowing sick people to be charged more. He said the provision would effectively result in a return to the days before ­ObamaCare, when people with pre-existing conditions were routinely denied coverage. “I want to make sure there is no denial of coverage based upon a pre-existing condition,” he said. “I know it’s not directly on point, but I think it has an effect.” Rep. Tom Reed (R-N.Y.), who supported the GOP repeal bill before it was pulled from the floor last month, called community rating a “very significant reform” made in ­ObamaCare. “I appreciate the states’ rights argument but recognize that there’s a reason behind community rating and the benefit that it brings to the insurance reforms,” he told reporters.

Meanwhile, the Trump White House has decided to pay out Obamacare subsidies that are currently the subject of a lawsuit filed by House Republicans, who say the Obama administration was distributing money never authorized by Congress. Some conservative advisers were urging Trump not to allocate the money, which would have further spiked premiums under Obamacare. If he'd followed that advice, Democrats would certainly have accused Trump of "sabotaging" the law by hurting people, muddying the waters of blame on the failing law. But those waters are already muddied with Republicans in power. Nevertheless, it looks like Jared Kushner, who favored moving ahead with this element of Obamacare, once again carried the day:

The Trump administration says it is willing to continue paying subsidies to health insurance companies under the Affordable Care Act even though House Republicans say the payments are illegal because Congress never authorized them. The statement sends a small but potentially significant signal to insurers, encouraging them to stay in the market. The future of the payments has been in doubt because of a lawsuit filed in 2014 by House Republicans, who said the Obama administration was paying the subsidies illegally. Without the subsidies, insurance markets could quickly unravel. Even more insurers could withdraw from the public marketplaces where more than 10 million Americans obtained coverage last year.

Does this indicate that Trump anticipates Obamacare remaining the law in perpetuity? Or that he doesn't think the risk of having premium increases pinned more easily on him is worth the political hit while he's trying to repeal the overall law? Another factor may be trying to reassure carriers that he's working toward healthier individual markets and asking them to hang in there while Congressional Republicans work through their 'repeal and replace' process. I'll leave you with the president telling Fox Business that while tax reform is still a major priority, he needs to get the healthcare piece done first, for reasons we outlined yesterday:

.@POTUS: "We are going to have a phenomenal tax reform but I have to do health care first." https://t.co/qkETJHyeB8 pic.twitter.com/PWfyDwrGPN