Analysis: Trump WH Demonstrates How Not to Roll Out a New Policy 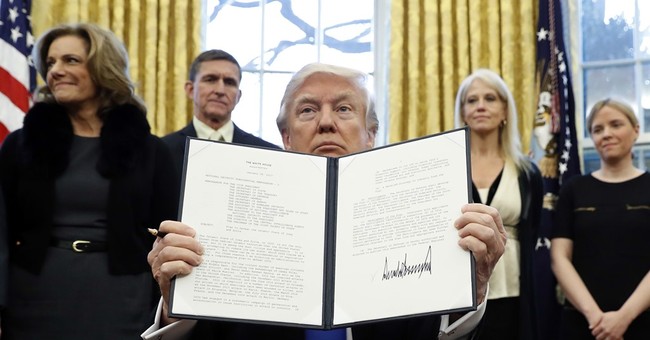 The White House has significantly altered President Trump's executive order to temporarily pause the influx of non-citizen entrants from seven majority-Muslim countries into the United States. It was revealed over the weekend that Team Trump failed to adequately consult with relevant lawyers and agencies prior to implementing the new policy, and that a small handful of political aides overrode the Department of Homeland Security's initial legal judgement that green card holders (legal permanent residents) should be exempt from the moratorium. The ensuing firestorm forced the new DHS Secretary -- who reportedly first reviewed the order's finalized content as Trump signed it into effect on television -- to retract the LPR overreach:

Hours later on Sunday, the administration announced that once new vetting procedures are crafted over the next 90 days, the temporary measure will be lifted altogether:

BREAKING: U.S. will issue visas to all countries once secure policies put in place over next 90 days: Trump https://t.co/Goe7v1Wad7

This is damage control in the tumultuous wake of a hasty and inept roll-out of a sloppy, flawed policy. As I described on Twitter last evening (having already established my support for a thoughtful regime of enhanced vetting for potentially dangerous people seeking the privilege of entering our sovereign nation) it didn't have to be this way. A modicum of due diligence, advanced planning, tactical mitigation efforts, and coalition building could have made this a much smaller story:

...instead, this inept mess & the worst optics imaginable, atop sloppy policy. ??

Alas, that's the alternate scenario.  In reality, key administration figures were never looped in, and potential allies in Congress were blindsided, a growing number of whom were left with little choice but to publicly question and condemn elements of the plan Trump dropped on their heads. The ham-fisted implementation of the order also handed the administration's opponents sympathetic, innocent 'victims' of the policy; a PR coup for the opposition, and an optics mess for the White House. Toss in this healthy dash of Baghdad-Bobism from an unnamed senior administration official and the embarrassment was complete:

SAO: “It really is a massive success story on implementation on every single level”

As for the substance of the order, one good resource is David French's evenhanded analysis at National Review, which provides useful facts and context in criticizing certain portions of Trump's policy and defending others.  Former federal prosecutor Andy McCarthy also takes a scalpel to the argument that Trump's order is unconstitutional and illegal; he argues, pretty persuasively, that the president wields both the constitutional and statutory power to do what Trump has done -- even as McCarthy declines to weigh in on the overall efficacy or wisdom of the move:

Let’s start with the Constitution, which vests all executive power in the president. Under the Constitution, as Thomas Jefferson wrote shortly after its adoption, “the transaction of business with foreign nations is Executive altogether. It belongs then to the head of that department, except as to such portions of it as are specifically submitted to the Senate. Exceptions are to be construed strictly.”...Federal immigration law also includes Section 1182(f), which states: “Whenever the President finds that the entry of any aliens or of any class of aliens into the United States would be detrimental to the interests of the United States, he may by proclamation, and for such period as he shall deem necessary, suspend the entry of all aliens or any class of aliens as immigrants or nonimmigrants, or impose on the entry of aliens any restrictions he may deem to be appropriate” (emphasis added). Section 1182(f) plainly and sweepingly authorizes the president to issue temporary bans on the entry of classes of aliens for national-security purposes. This is precisely what President Trump has done.

Others' assessments have been far more critical, including this blistering piece by Benjamin Wittes of the Brookings and Hoover Institutions.  Wittes writes that as some who's been outspokenly supportive of various muscular national security policies criticized by the Left, he rejects Trump's executive order as a toxic blend of malevolence and incompetence.  Libertarian-leaning legal scholar Jonathan Adler concurs with that overall sentiment:

Whatever one thinks of the underlying policy, the degree of administrative incompetence in its execution is jaw-dropping...An EO that is ostensibly issued for the purpose of protecting national security was not properly vetted, nor did anyone make any meaningful effort to ensure that those government officials tasked with executing the administration’s policy understood what it was they were doing. Indeed, as drafted, the EO didn’t even cite the right provisions in federal law...Under normal circumstances, I believe that the policy embodied in the Trump EO is lawful under existing precedent and would survive judicial review. That is, I believe the executive branch may decide to identify specific countries from which immigrants and others seeking entry into the country must receive “extreme vetting” and that the President may order a suspension of refugees from particular places (as Obama did with Iraq in 2011). Despite some of the President’s comments during the campaign about wanting a “Muslim ban,” this EO does not come anywhere close to effectuating such a ban, as it largely focuses on countries that were previously identified as sources of potential terror threats. I stress “under normal circumstances” because these are not normal circumstances. The cavalier and reckless manner in which this specific EO was developed and implemented will likely give judges pause — and with good reason.

Piling on, former CIA director Michael Hayden added that in his estimation, the order "inarguably has made us less safe."  Wittes describes the policy as "both wildly over-inclusive and wildly under-inclusive."  Over-inclusive because it affects many innocent parties, including -- at first -- legal permanent residents of the United States, who have already undergone serious vetting.  (As an aside, President Trump should remember the names of the advisers who pushed this foolish mistake over the objections of national security professionals, from which his administration was quickly forced to retreat.  He received very poor counsel on that front and he should bear that in mind moving forward).  The order is simultaneously under-Inclusive because it doesn't cover places like Pakistan or Saudi Arabia, nations from which terrorists have come to the United States to conduct attacks.  Some have weakly alleged that this disconnect arises from Trump's business interests, but others have noted (including Adler above, and our own Matt Vespa over the weekend) that the list of countries originated in visa waiver legislation signed into law by President Obama.  Facts matter.

The omission of certain countries also underscores the inaccuracy of the "Muslim ban" shorthand upon which too many in the press are relying.  There are hundreds of millions of Muslims living in majority-Muslim nations who are entirely unaffected by this order, including the populations of the aforementioned countries, as well as the most populous Muslim country on the planet.  Conversely, Trump's policy does impact many non-Muslims living in the targeted countries.  It's fair to note that candidate Trump's campaign-era proposals lend credence to suspicions about the intended scope of this new move, and statements from certain Trump allies have further muddied the waters.  Nevertheless, the actual document put into effect over the weekend empirically is not a "Muslim ban."  Anti-Trump leftists have landed on that erroneous term as part of their rallying cry, but the media further sacrifices its credibility by repeating it.  I'll leave you with what may be the more important and possibly lasting news of the weekend: