Obamacare Architect: Actually, Our Law Was Never Intended to Help Everyone

After orchestrating a relentless campaign of deception about the law he designed, established liar Jonathan Gruber and his fellow propagandists have since made a series of admissions about Obamacare that undercut the mendacious sell-job he helped pioneer. Gruber stated privately, on several occasions, that his future analysis of the legal battle over state-based exchanges and subsidy eligibility would be dishonest, conceding the core argument of those anti-Obamacare lawsuits. Another Obamacare architect, Zeke Emanuel, finally confessed that people really couldn't necessarily keep their doctors and plans -- and that maybe the law wasn't especially "affordable" after all. Now here's Gruber sparring with Tucker Carlson last night, tossing another key Obamacare marketing slogan overboard. Democrats promoted their partisan scheme as a win/win panacea that would benefit everybody.  No more:

“This was never supposed to help everybody, Tucker,” Gruber said... Gruber proceeded to say that wealthy Americans were hurt by the new taxes implemented by the Affordable Care Act. He also admitted that young, healthy people were hurt by Obamacare because the law eliminated the “discriminatory” health insurance market that existed before the law took effect. “The people who oppose the law are people who haven’t benefited from the law, but haven’t been hurt from the law,” he said. “They’ve just heard, in my view, they’ve heard a lot of bad misinformation about it.”

Ah, he's back to the old, dumb "disinformation" chestnut, which once inspired hapless and frustrated former HHS Secretary Kathleen Sebelius to muse about mass re-education. The problem is that the real-world results have been the opposite of these people said would happen.  We have them on tape.  Reality, not rhetoric, has burst the 'Affordable' Care Act bubble. Its defenders used to insist that Obamacare would create millions of winners and no losers. Coverage would be significantly expanded, costs would fall for all Americans, all while lowering healthcare-related spending and deficits. That fantasy has been endlessly exposed as a fraud, leaving people like Gruber with no choice but to tell the truth: There were always going to be winners and losers. What Gruber doesn't add is that the losers have consistently outnumbered the winners, which is why the law has remained so unpopular: 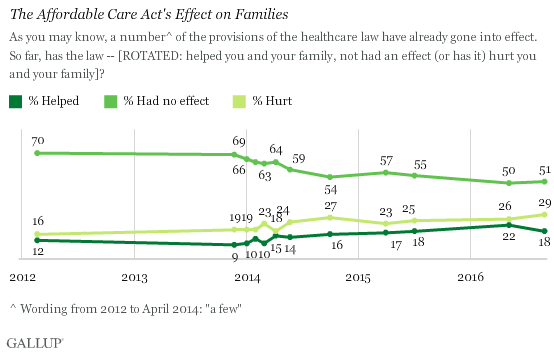 As we've pointed out on multiple occasions, the number of Americans unaffected by Obamacare (the majority, for now) is designed to shrink under the law. We know this, in part, thanks to the behind-closed-doors candor of...Jonathan Gruber. And from the White House's internal calculations. Democrats' proposed "fixes" to the law would hasten the collapse of the individual market through a non-competitive "public option," which would incentivize more employers to dump their workers into a government-subsizied pool -- which, in turn, would crowd out the private market (which is already an accelerating trend). Other proposed methods of mending the failing law include spending even more money on subsidies, and whacking consumers with even higher fines for not being able to afford the increasing premiums, via the already-hated individual mandate tax. Obamacare is a stalling, wheezing, expensive, mandate-laden mess that may be helping some people, but is harming far more while violating virtually every central promise upon which it was built. It must be repealed and replaced with something better. That won't be easy, but I cannot endorse center-right columnist Matt Lewis' suggestion that the GOP should consider punting on the issue:

The more I talk to conservative-leaning health care policy experts—sources that had previously helped me understand the debacle that would become Obamacare—the more convinced I am that this could all go horribly wrong...“It feels like Bush’s Social Security all over again,” one senior industry official told me. “It’s really hard to see how this ends up with as many people being covered at the same or lower costs. It’s a mess.” Even that may be a best-case scenario. Social Security reform was a bust that wasted President George W. Bush’s second-term political capital, but Republicans didn’t repeal Social Security. There is always the danger that this could go catastrophically wrong. Should Republicans actually kick off a new administration by engaging in a fool’s errand that is almost guaranteed to backfire? Sometimes you have to punt.

An Obamacare punt would be an unforgivable betrayal of the Republican base, which has righteously opposed the law since it was proposed in 2009. Republicans have run on repealing the law over four consecutive election cycles, winning both houses of Congress and the presidency in the process. To walk away from the problem now that they wield full control would be a harsh slap in the face to millions of voters. It cannot happen. And of course there's the more important point that Obamacare is hurting real people, and needs to be uprooted. I share some of Lewis' fears -- namely, (a) that Republican infighting will stand in the way of a viable consensus alternative that can rally the sort of unity that will be required to accomplish something so technically difficult, and (b) that Democrats will obstinately block any effort to clean up the mess that they've created, then seek to blame the resulting chaos on Republicans. Sen. Claire McCaskill previewed that "party of no" strategy during Dr. Tom Price's confirmation hearings this week: "What we have after the repeal is Trump care," she said, suggesting that Republicans would garner zero Democratic votes.

McCaskill represents a state that went heavily for Donald Trump in November and is seen as quite vulnerable in 2018. It's also a bit rich listening to her whine about the possibility of party-line votes, given that she happily walked Obamacare's hyper-partisan plank for her team in 2009 and 2010.  But her comments underscore the point that Republicans must not only rally behind a strong replacement plan; they need to be prepared to mercilessly blast Democrats who refuse to permit votes on ensuing solutions. Democrats used endless lies to foist an expensive scheme on an unwilling public. It has failed, based on the promises and metrics they established. And now that Republicans are fulfilling an unambiguous and consistent campaign promise, Democrats would rather have millions suffer and lose coverage, and watch costs continue to explode, than allow their failed experiment to be replaced. They've badly screwed up healthcare once, and now they're poised to do it again. If that's how they want to play this, they need to pay a painful political price.  Again.  I'll leave you with Paul Ryan discussing the future of Obamacare on MSNBC last evening (the healthcare bit starts around the ten minute mark, and runs for about five minutes):