When a DC Circuit Court of Appeals panel released its Obamacare-related decision earlier this week, the Left's self-appointed "wonk" class kicked into damage control overdrive. The three-judge panel ruled that the 'Affordable' Care Act's explicit language proscribed the distribution of subsidies to anyone who did not enroll through state-based marketplaces. The fallout of this decision, if it's upheld down the line, is that consumers in the 36 states served by the federal exchange are ineligible to receive taxpayer-supported tax credits to offset the law's high premiums. This outcome would wreak havoc on the law's sustainability. Obamacare's text couldn't be clearer on this particular point, as even the Fourth Circuit Court, which reached the opposite ultimate conclusion, admitted; the limitation in question appears repeatedly in the legislative language. Many Obamacare supporters have insisted that this was an oversight. A drafting error. A typo. And conservatives raising this point are off their rockers, they sneer. One of the most influential players in this dispute is Jonathan Gruber, an MIT economist who is considered by many to be the architect of the law, and who told the New York Times, "I know more about this law than any other economist." He's filed amicus briefs in the relevant cases confirming liberals' assertions that it was never anyone's intention that only state-based exchange enrollees are eligible for taxpayer subsidies. Arguments to the contrary, he's said, are "screwy," "nutty," "stupid," and "desperate." In case he wasn't making himself clear, Gruber appeared on MSNBC this week and said this:

“Literally every single person involved in the crafting of this law has said that it`s a typo, that they had no intention of excluding the 'federal' states.”


Literally. He went on to decry suggestions to the contrary as "criminal." QED, right? Let's go to the video tape. Here's Gruber, who "knows more about this law than any other economist," explaining how the law he helped write and promote in 2012. The clip begins with his recent answer transcribed above, followed by his 2012 analysis: 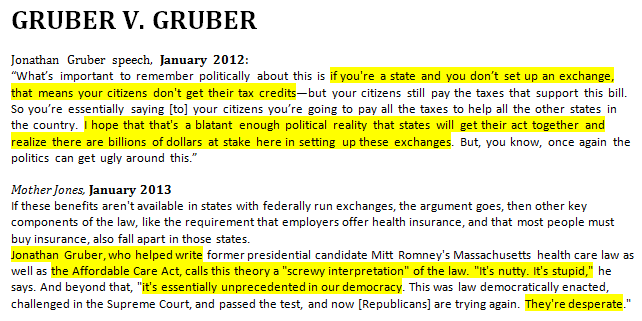 "If you're a state and you don't set up an exchange, that means your citizens don't get their tax credits." He affirmed conservatives' argument in 2012 by sharing his own expertise about the law as it's written. Then, when his own explanation became politically problematic, he reversed positions, shamelessly arguing that "literally" nobody had ever intended to make the case that he himself had explicitly laid out. Who's the "criminal," again? The Left, gobsmacked by this discovery, cast about for answers, and Gruber gave them one this morning. It was comically pathetic:


I honestly don’t remember why I said that. I was speaking off-the-cuff. It was just a mistake. People make mistakes. Congress made a mistake drafting the law and I made a mistake talking about it...My subsequent statement was just a speak-o—you know, like a typo.


A "speak-o." That's a new one. He was just confused, you guys. He accidentally said the wrong thing. He was "speaking off the cuff." People make mistakes. But do they make "off the cuff speak-o mistakes" repeatedly, and in prepared remarks? Additional audio from a separate 2012 Gruber speech has surfaced:


"Finally, the third risk, and the one folks aren't talking about, which may be most important of all, is the role of the states...Will people understand that gee, if your governor doesn't set up an exchange, you're losing hundreds of millions of dollars of tax credits to be delivered to your citizens."


Not only did he offer this analysis at least twice, he emphasized the subsidy "risk" as an under-reported, highly important point. This man is a liar. And one of his prominent defenders has also admitted on tape that misleading the public about Obamacare's contents is justified in order to "win." Prominent Democrats agreed. For the humiliated Left, Gruber has gone from the gold standard witness on this question to an afterthought. Goalposts, shifted:

The ACA was the most debated and discussed piece of legislation in a generation. Find me a legislator saying what Gruber said. Go.


Aside from Sen. Max Baucus' remarks and concerns raised by Texas Democrats about their state rejecting the exchange, this is the best answer to that challenge:

They said it in the legislation, champ. MT @chrislhayes Find me a legislator saying what Gruber said. Go.


Yep. It was in the bill, for which hundreds of Democrats voted. The House version included broader verbiage, but once Scott Brown got elected, Democrats didn't have the votes to revise their legislation. They had to embrace the Senate-passed bill, which specifically barred subsidies for consumers in states that hadn't set up their own marketplaces. One last point: Philip Klein worries that if the court's decision holds, it will create headaches for Republican governors who will come under intense pressure to set up Obamacare exchanges. You're heartlessly taking away people's healthcare! Ramesh Ponnuru isn't so sure that the politics would cut that way. Democrats are solely responsible for the mess they've made, and bitter attempts to blame Republicans for the law's myriad failures have thus far fallen flat.