Economic Illiteracy: Sanders' Reaction to Trump Carrier Deal as Backwards as You Might Expect 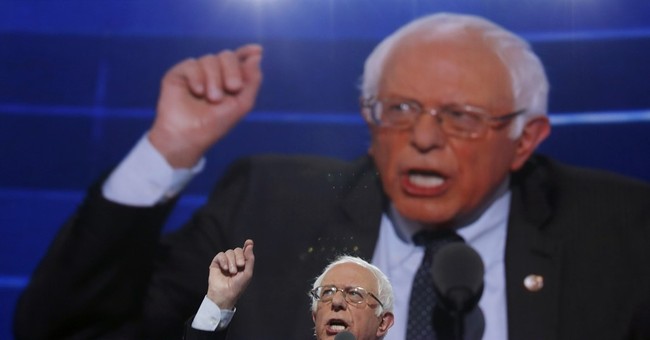 As Donald Trump and Mike Pence took their much-publicized victory lap at an Indiana manufacturing plant yesterday, Bernie Sanders -- a supposed champion of working people -- blasted the deal struck between the newly-elected Republican presidential ticket and Carrier to keep approximately 1,000 blue collar jobs in America. I'll circle back to the substance behind Thursday's splashy, celebratory announcement in a moment, but first, here's America's highest-profile elected Socialist lashing out at Trump in the Washington Post:

President-elect Donald Trump will reportedly announce a deal with United Technologies, the corporation that owns Carrier, that keeps less than 1,000 of the 2,100 jobs in America that were previously scheduled to be transferred to Mexico. Let’s be clear: It is not good enough to save some of these jobs. Trump made a promise that he would save all of these jobs, and we cannot rest until an ironclad contract is signed to ensure that all of these workers are able to continue working in Indiana without having their pay or benefits slashed. In exchange for allowing United Technologies to continue to offshore more than 1,000 jobs, Trump will reportedly give the company tax and regulatory favors that the corporation has sought.

Just a short few months ago, Trump was pledging to force United Technologies to “pay a damn tax.” He was insisting on very steep tariffs for companies like Carrier that left the United States and wanted to sell their foreign-made products back in the United States. Instead of a damn tax, the company will be rewarded with a damn tax cut. Wow! How’s that for standing up to corporate greed? How’s that for punishing corporations that shut down in the United States and move abroad? In essence, United Technologies took Trump hostage and won. And that should send a shock wave of fear through all workers across the country.

I responded to Bernie's critique on Fox News with Shannon Bream:

Sanders bellyaches that Trump didn't save every single job in the batch, noting that hundreds are still being relocated to Mexico.  He only saved some of the jobs! doesn't strike me as a particularly trenchant or convincing argument -- and certainly not one that "should send a shock wave of fear" through American workers, 1,000 of whom will remain employed in the heartland, thanks to the new agreement.  Dumber still is Sanders' lamentation that Carrier was partially incentivized with tax breaks to hold those jobs in America.  They should have been taxed more (what a novel thought), the Vermont Senator suggests.  As I note in the clip, this is fantasy.  Sanders believes the government can interfere to force companies not to offshore jobs while forcing them to pay more in taxes.  He seems to think that erecting additional barriers to job creation and profitability is a surefire solution to spur job-securing and job-creating decisions from corporate executives.  Command and control.  Unsurprisingly, Sanders' vision has it exactly backwards.

That being said, although it's no doubt great PR for Trump and a feel-good moment for those workers whose jobs have been spared, this loudly-touted deal does not represent a sustainable model over the long term.  The federal government should not be carving out sweetheart deals and picking winners and losers with the tax code.  When liberals do this, conservatives decry it as crony capitalism.  And there is a distinct cronyist whiff about this whole development, including credible speculation that Carrier's parent company was protecting its lucrative government contracts by handing Trump a win here.  The more lasting and sound economic path forward is to reform the tax code and reduce regulations in order to make America a more attractive, competitive and stable place to do business and create jobs.  The fostering of that sort of pro-business environment ought to be the Trump administration's top economic priority; Trump himself has endorsed this overall approach, which is encouraging.  Conservatives should hope that he pursues it upon taking office.  If he does, its long-term, substantive benefits will far outweigh the impact of any occasional ad hoc, Carrier-style deals he may negotiate and boast about -- which, admittedly, can make for great politics.  At the very least, Trump is sending a strong signal before he even takes office that he's committed to working hard on behalf of workers, even if his methods aren't ideal.  Cementing that bond of trust and attracting some positive press may give him the operating space and political capital to implement needed reforms and policy changes that will benefit all Americans.  That's the optimistic take, at least.

I'll leave you with a strong free market critique of Trump's Carrier cronyism, a sobering reminder of the economic realities of automation vis-a-vis America's manufacturing sector, and full video of yesterday's triumphant event in Indianapolis: