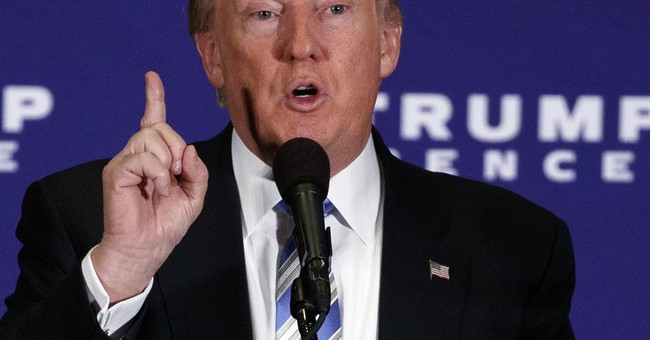 This story started making the rounds on social media over the weekend, eventually catching fire due to Trumpworld's desperation to latch onto any piece of "evidence" -- no matter how embarrassingly ludicrous -- that the election is "rigged." (Reminder: The media turned exceedingly negative on Trump after the primaries, and the Clinton email investigation was highly questionable, but the electoral process itself is above-board and widely untainted). This latest conspiracy theory is that a Wikileaks-hacked email from John Podesta "proves" that Hillary's campaign is colluding with the mainstream media to rig the polls to make it appear as though Trump is losing. Trump himself appeared to amplify the bogus storyline on Twitter, because of course he did:

Major story that the Dems are making up phony polls in order to suppress the the Trump . We are going to WIN!

Here's what "the the Trump" is referring to:

See? They're deliberately oversampling Democrats to make it look like Trump is losing!  Or not.  The only thing that's remotely accurate about any of this is that Podesta used the word "oversamples," and mentioned "media polling" in the email.  But there's less to this supposed 'gotcha' than meets the eye.  Much less.  First of all, oversampling is an long-established polling practice with a very specific definition, described here by Pew Research (via Bradd Jaffy):

For some surveys, it is important to ensure that there are enough members of a certain subgroup in the population so that more reliable estimates can be reported for that group. To do this, we oversample members of the subgroup by selecting more people from this group than would typically be done if everyone in the sample had an equal chance of being selected. Because the margin of sampling error is related to the size of the sample, increasing the sample size for a particular subgroup through the use of oversampling allows for estimates to be made with a smaller margin of error. A survey that includes an oversample weights the results so that members in the oversampled group are weighted to their actual proportion in the population; this allows for the overall survey results to represent both the national population and the oversampled subgroup.

Click through for an explanation of how this methodology applies to African Americans, a subgroup Pew uses to illustrate how oversampling works. There is nothing controversial here. Oh, and Podesta's email was sent in January...of 2008. So his brief missive on polling comes from two presidential cycles ago, during the Democratic primary.  Bottom line: Even a cursory inspection reveals that this isn't what some people think it looks like.  If you're jonesing for a "the polls are wrong" argument, the Kentucky case study is probably your best bet at this stage.  I'll leave you with Trump's campaign manager conceding the obvious -- "we are behind:"