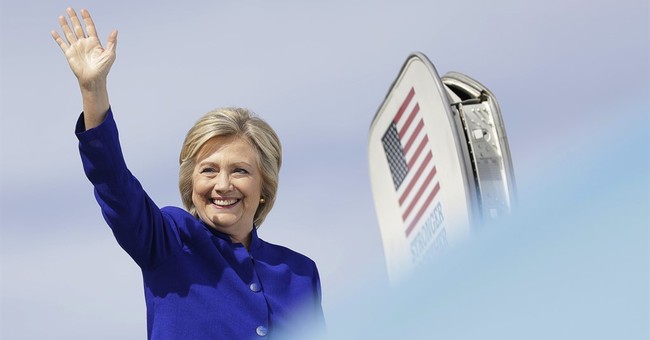 With Monday's pivotal presidential debate looming, both campaigns are engaged in furious pre-spin, seeking to set expectations that will benefit their candidate. Hillary Clinton's camp is doing everything it can to lower expectations for her, reportedly privately fretting that they can't, with many liberals complaining that the media's consensus regarding Trump's actual low expectations is only setting him up to exceed them. Republicans, meanwhile, are highlighting Clinton's vast resume of public service, arguing that of course she should dominate on policy details. In an open memo penned by Republican National Committee Communications Director Sean Spicer, the GOP praises Clinton's "ample experience" and "adroit performances" in past debates. Spicer also mines a few quotes from Hillary's team that support his conclusion that she "has no excuse not to turn in a near-flawless performance:"

Election Day is now less than fifty days away, and with national polling reflecting a surge of momentum for Donald Trump, the pressure is squarely on Hillary Clinton to live up to her reputation as a talented debater at a time when millions of undecided voters will be glued to their screens. For Clinton, high expectations stem from ample experience. Clinton is a career politician who has spent years sharpening her debate reflexes and beefing up on public policy. Donald Trump is new to the format. Aside from the primary debates (which have lower levels of attention focused on them and many more participants), Trump’s lack of formal, political, one-on-one debate experience gives Clinton a significant advantage. This view is informed in large part due to Clinton’s adroit performances in past debates. Clinton’s been at it since she’s been on the debate team in high school, and she has shined on some of the biggest stages before...Trump hasn’t been running for president for 24 years, he’s spent his career as a successful businessman. Few are expecting the same level of polish from a verbal gunslinger whose rhetorical strength is speaking to the heart – and the gut – of the American people. Aside from the Super Bowl, the first debate has very high potential to be the most watched television event of the year. With so much riding on this moment and a wealth of experience working in her favor, Hillary Clinton has no excuse not to turn in a near-flawless performance.

This is textbook expectations management, even employing a "high school debate team" line similar to Bush allies' talking point in advance of the president's high-stakes clashes with Yale debating champion John Kerry in 2004.  The reality is that Mrs. Clinton generally is a solid debater, and she's reportedly devoted a lot of time and research to preparing for these three potentially-decisive exchanges with Donald Trump -- whose preparation regimen is unclear-to-nonexistent.  I suspect many people anticipate a rout, with Hillary flashing detail-oriented issue fluency, while Trump relies on bravado, generalizations, and insults to distract from his lack of specifics.  That worked well for him in GOP primary debates in which he always benefited from multiple competitors onstage, eating up talk time.  But Monday's event will be one-on-one for 90 minutes.  There's no hiding up there.  Because of these prevailing sentiments, fairly or not, each candidate faces very distinct standards.  Anything other than a clear win for Hillary -- not necessarily "near-flawless," but decisive -- will likely be perceived by many as an underperformance.  As for Trump, Rich Lowry's latest column reflects a point I've been making for weeks.  He correctly argues that the celebrity mogul has an entirely different bar to clear:

Hillary Clinton will almost certainly win Monday night’s epic presidential debate on points — and still could lose. It’s hard to see how Clinton, who has marinated in public policy for 30 years and is preparing for the debate like it is the invasion of Normandy, won’t repeatedly best Donald Trump on substance...Trump has a significant built-in advantage in that there is a lower standard for him — not because the media isn’t tough enough on him, as all the media mavens agree, but because he is the de facto challenger and candidate of change in a change election. Trump can win by clearing a bar of acceptability, whereas Clinton has to do more than that and either significantly wound Trump or make a compellingly positive case for herself that has so far eluded her in both 2008 and 2016. This is not to say that Trump won’t be on treacherous terrain. He can’t bully and mock Clinton the way he did his Republican rivals. He won’t have a crowd to feed off of. Without a teleprompter, message discipline still tends to elude him. The one-on-one format for an hour-and-a-half could make his thin knowledge painfully obvious. And any misstep or outburst that reinforces the idea that he lacks the qualities to be commander in chief would be devastating.

But Trump just needs to seem plausible and the very fact that he is on a presidential debate stage, the most rarified forum in American politics, will benefit him...The fact is that Trump will have to stumble badly — and probably sabotage himself — to live down to Hillary’s critique of him. She has made her campaign almost entirely about how Trump is a monstrous madman. This was an understandable calculation — she wanted to disqualify him out of the box and differentiate and isolate him from other Republicans. The cost is that she has done more than anyone to lower the standard for Trump. It’s not as though he needs to mount a convincing, detailed defense of his tax or child care plan or anything else to invalidate Clinton’s critique of him; he just needs to seem a reasonable person. That is why Trump doesn’t need to be the aggressor. As long as he’s firm and calm, he is implicitly rebutting the case against him on temperament.

I've been using that P-word, "plausible," whenever I've been asked about these debates. Perhaps Trump's biggest obstacle to winning this race, as Rich rehearses in his piece, is the data showing that strong majorities of Americans routinely tell pollsters that the GOP nominee lacks the qualifications and temperament to be President of the United States. Trump doesn't need to wow the (likely historically enormous) home audience with a flurry of newfound policy expertise, although some improvement would be nice. He does need to move the plausibility needle in his direction. Maybe not dramatically -- he's still competitive in national polling, despite these broadly-held negative perceptions -- but enough to allay the concerns and doubts of millions of undecided voters who may be looking for a reason to vote against Hillary, but aren't yet convinced he's got what it takes on a fundamental level.  That's why a fairly steady and placid showing, graded on the Trump curve of course, with a few memorable zingers might be enough for him to battle to a draw.  Even if she overwhelms and outclasses him with knowledge.  It's pretty simple, I think: A non-loss is a win for Trump.  And Team Hillary ought to know that underestimating him, and counting on a self-inflicted meltdown, isn't always a winning ticket against Donald Trump.  I'll leave you with this interesting essay on debate history and advice from Karl Rove, and with this line from Trump -- which Allahpundit persuasively argues  ought to be central to his closing argument: