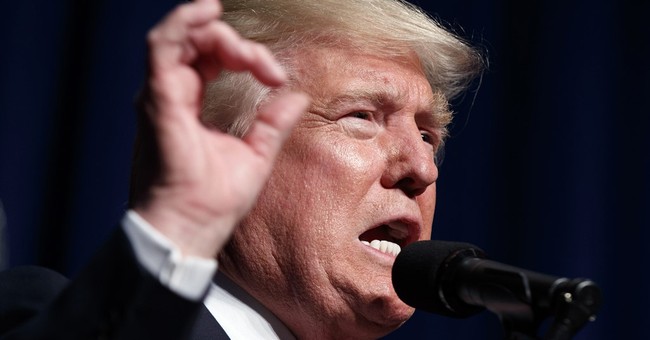 When Ivanka Trump included a passage about government-required paid parental leave in her July convention speech, observers wondered whether it was free-styled empty pandering, or if the traditionally Democratic proposal would eventually get folded into her father's agenda. Facing a stubborn and significant disadvantage with female voters, Donald Trump will announce that as president, he'd seek to mandate a six-week paid maternity leave for new parents. No word on whether Bernie Sanders' heart skipped a beat upon hearing the news.  The Washington Post reports:

Donald Trump on Tuesday will unveil several policy proposals for lowering child-care costs that were crafted in part by his eldest daughter, Ivanka, including a plan to guarantee six weeks of paid maternity leave that marks a striking departure from GOP orthodoxy of recent years. Conservative Republicans, in particular, have long seen a mandated expansion of the social safety net as anathema to their attempts to shrink government spending and give companies more control over their leave policies. Trump campaign officials said Tuesday morning that the Republican presidential nominee will propose a plan for paid leave that they believe can gain bipartisan approval. While details of the proposal remained unclear ahead of Trump's speech, the officials said it wouldn't cost taxpayers anything more; instead, it would be financed through savings achieved by eliminating fraud in the unemployment insurance program.

A brand new entitlement from the federal government, allegedly paid for by eliminating "waste, fraud, and abuse" -- one of the oldest, most vacuous, least credible 'pay fors' in Statists' bag of magical promises.  Once upon a time, conservatives were united in opposition to more federal meddling in private business practices, recognizing that imposing new government requirements inevitably raises the cost of doing business and erects new obstacles to job creation.  Conservatives also understood that forcing businesses to do costly things would result in costly outcomes for employees and customers -- or, if the Left had its way, taxpayers.  This utopian vision has long been the subject of righty ridicule:

Ed Morrissey runs some numbers and concludes that Trump's plan will realistically require a tax increase on employers, or will be effectively unfunded.  Of course, Trump's stand-up-and-salute brigade will call this a brilliant and necessary bit of outreach to a major demographic among whom the nominee has struggled.  Eye on the ball, fiscal conservatives: There's no time for silly, myopic nonsense like commitment to ideological principles right now.  So what if Trump vows he won't touch the entitlement crisis, which is the single largest driver of our unsustainable national debt problem?  It's the end of America forever if Hillary wins, they say, so we must accept, justify, or ignore literally anything the man says that may hoist serious red flags under other circumstances.  Don't forget: Ivanka -- who is lovely, but who also couldn't vote for her father in the primary because she's not a Republican -- also co-opted the Left's "pay gap" rhetoric in her Cleveland address.  If Trump's campaign thinks he needs another boost with women next month, is it terribly difficult to imagine him adopting another liberal proposal under which the feds intervene to "fix" a grossly-exaggerated problem while harming job creation, but that makes people feel righteous?  Not at all.  He's doing so today.  And Trump has virtually zero conservative ideological underpinnings, having spent much of his adult life, including very recently, as a liberal, Hillary-supporting Democrat.  The best argument for wary conservatives to ignore this stuff is that Trump isn't the least bit interested in policy, so if he's elected, he'll just sign the legislation that Paul Ryan and Mitch McConnell send him -- which won't include lefty hobby horse bills.  I think.  I'll leave you with some less objectionable elements of Trump's leaked speech:

The officials also said that Trump would lay out specific plans for enabling parents to deduct the cost of child-care expenses from their income taxes...Also included in Tuesday’s speech: additional spending rebates through the Earned Income Tax Credit, expanded deduction opportunities for stay-at-home parents, and revised federal savings accounts to set aside funds for child development and educational needs. According to Trump aides, Ivanka Trump has encouraged her father for weeks to detail policies that would appeal to parents who feel overburdened or underserved by existing programs, following up on the theme that coursed through her remarks at the convention. Trump campaign manager Kellyanne Conway, who has grown close with Ivanka, also played a role in making child-care policy a priority, with an eye toward winning over female voters in places such as the vote-rich Philadelphia suburbs, the aides said.

I'm all for sending a strong, policy-based "we care" message to women and child-rearers. I just don't think conservatives need to accept the Left's premises and adopt their ideas to do so. Also, perhaps it goes without saying, but Hillary's plan is even more expensive and expansive: "Democratic nominee Hillary Clinton has proposed guaranteeing 12 weeks of paid family leave. As reported by The Post’s Danielle Paquette, Clinton shared her plans for child-care policy in May, 'proposing to cap the expense at 10 percent of a household’s income. She intends to reach that lofty goal with tax credits and subsidized child care, both of which would require an enormous public investment.'"