Trump on Future Immigration Plans: 'You're Going to See There's Really Quite a Bit of Softening' 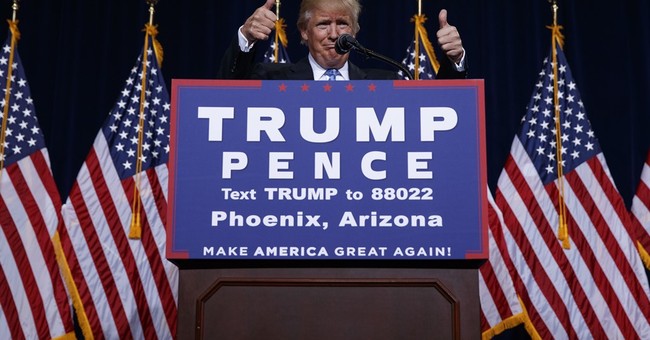 Softening. No, wait: Hardening. Actually, on third thought, it's definitely softening. Or not. Last night's Trump speech on immigration was heavy on border enforcement and tossing illegal immigrant felons out of the country, but what to do about the 11 million or so people who are living in America in violation of our immigration laws who haven't committed additional crimes? Are mass deportations still on the table? What about a path to legalization? Trump appeared to embrace "touchback" legalization, wherein illegal immigrants would have to return to their nations of origin before being allowed back into the United States. But that would require a massive enforcement regime, and by his own admission, he's not prepared to make any final decisions on any of that until other priorities are met. In other words, build the wall, secure the border, deport criminal aliens, then we'll get back to you. Trump booster/adviser/convention speaker Laura Ingraham heard a very hawkish address Wednesday night, then posed this question to her man Thursday morning:

Trump insists "you're going to see there's really quite a bit of softening" in intvu w/Laura Ingraham this AM: pic.twitter.com/UF8Hnpoc8M

That was great! Red meat galore! Where's this supposed 'softening' the media's been yapping about? Answer: Oh, there's going to be softening. Quite a bit of it. Believe me.  So what's going on here?  A theory, rooted in two strands of evidence.  First, this New York Times report, which suggests that Trump has recently begun to accept polling realities:

Several people close to Trump say he has begun to finally hear the reality - the polls aren't rigged https://t.co/JjBpj1kkFH

As I've suspected since she was hired, it seems Kellyanne Conway's decades of experience as a pollster is having an impact. Plus, the Times also reports that Eric Trump, the candidate's son, has been walked through a sobering tour of swing state polling by senior party officials, who explicitly warned that their nominee was getting perilously close to shutting off any path to victory. Serious, immediate adjustments were necessary. Hence the "pivot," which -- grading on a major curve -- has remained more or less intact for a few weeks.  (It's a temporary act, Stephen Hayes admonishes the talking heads).  Part of said pivot, entrenched by the polls Trump is apparently no longer dismissing in private, is his immigration "softening."  He can still play the hits ("we're going to build the wall, and Mexico is going to pay for it"), but strategically ambiguous treatment of potential mass deportations or legalization processes is the order of the day.  Which brings us to this item from the Fox News poll we broke down earlier:

More than three-quarters of respondents say the goal should be to erect some sort of structure through which most illegal immigrants can become legal residents, as opposed to the less than one-fifth who say the feds should round up and deport as many of them as possible.  That is a glaring statistic.  Also, pay special attention to the subcategories under question 17. Trump voters are by far the most likely group to say that backing away from hardline immigration stances would make them more likely to support him. Very few would waver because of it, as expected. He's perennially and forever safe with his base; they'll applaud virtually anything he does, a reality about which he's expressed amusement in the past.  Trump's top job right now is expanding his appeal to more Americans -- which, despite Hillary's clear polling erosion, hasn't actually been happening. He's got to try something, and immigration "softening" appears to be one of his top 'campaign reboot' plays. Let's see how it shakes out. To paraphrase the candidate himself, particularly in light of that data point regarding his own supporters, what does he have to lose?

Parting thought: Will anyone get Trump to change his mind on the value of get-out-the-vote efforts?  The RNC is doing yeoman's work on his behalf, but it's a real challenge when the nominee doesn't believe in the laws of electoral physics.