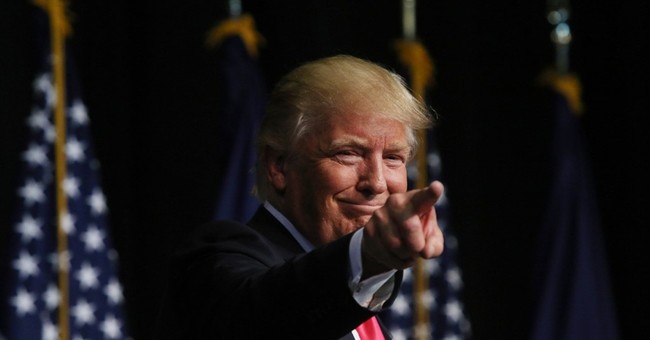 It's time to play Pick Your Poll. If you're rooting for Trump, there's evidence that his undeniable public opinion boost coming out of Cleveland is still alive and well. Take, for example, the Los Angeles Times/USC tracker, which shows him expanding his lead to seven points nationally.  The trend lines are self explanatory:

That was yesterday.  Today, his lead has inched up to nearly seven-and-a-half points. Even more encouraging for Team Trump is the Reuters/Ipsos data from yesterday. Sure, both candidates are in the high 30's with Trump two points ahead (a statistical tie), which may not sound especially promising.  Here's the context that makes the new results such good news for his campaign:

Quite a trajectory -- and all the more eyebrow-raising considering how unkind this particular series has been to Trump all cycle.  Part of what's at play here is that the Republican National Convention, for all of its upheaval and snafus, relentlessly and successfully reminded American voters of why Hillary Clinton has richly earned her unfavorable and distrusted reputation.  I mentioned these pre-DNC numbers from Gallup last night, but they're worth revisiting to fortify my point:

Donald Trump and Hillary Clinton now have identical favorability ratings, according to a new Gallup poll, and the average American does not look fondly upon either one of them. The new poll, conducted July 18-25, found 37 percent of Americans have favorable ratings of the two nominees, while 58 percent have unfavorable ratings. This is the first time Clinton’s favorable rating was not higher than Trump’s...Gallup also found the net impact of the GOP convention was negative, with 51 percent of Americans saying the convention made them less likely to vote for Trump and 36 percent saying they were more like to vote for him.

Hillary is less popular than ever in this poll, which helps explain Trump's surge...but the same survey found a slim majority of respondents saying that his Cleveland convention made them less likely to vote for him in November.  Which brings us to the other side of today's polling coin.  Rasmussen, which has been the pro-Trump outlier series in 2016 (the opposite of Reuters in that respect) has a new survey with Clinton ahead by a point.  That's down from a seven-point Trump advantage two weeks ago.  Hmm.  In fairness, given the amount of polling noise out there, it's tough to separate outliers from trends.  For instance, is this new data point out of Pennsylvania a huge red flag for Trump, or an anomaly?

If that's even close to accurate, this election is effectively over. Trump must be competitive in the Keystone state, and probably carry it, to win. His (highly debatable) theory of the race is that he'll flip enough blue collar, working class white people in rust belt states to pull off a victory. Pennsylvania, so often the GOP's presidential year white whale, is basically serving as a petri dish for that proposition. Statewide polling throughout June showed a competitive race, with Hillary very slightly ahead. But this is now the second consecutive poll showing hear advantage pushing double digits. A third survey with similar results would mark a very serious problem for the Trump campaign. We shall see.