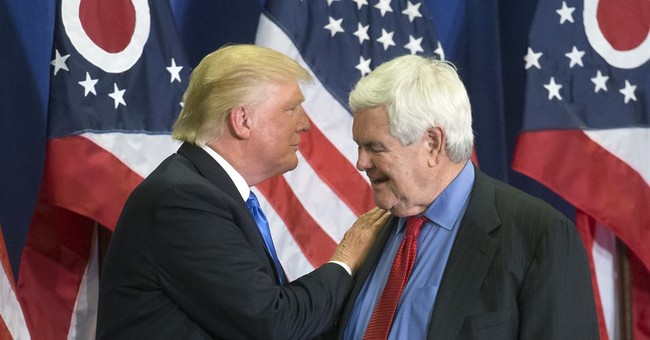 The political Twittersphere immediately kicked into speculation mode, running with the thought process that networks traditionally sever ties with paid contributors when they're in the process of announcing a run for public office. Using just Fox as an example, the cable news leader suspended Gingrich for his 2012 presidential campaign, and took Scott Brown off the payroll when he sought New Hampshire's US Senate seat that same year. It's standard operating procedure. Thus, given the context that Donald Trump is on the brink of announcing his running mate (today's rumor was that the announcement is coming Friday), the timing of this scoop seems...relevant.  But here's a follow-up tweet from Stelter:

Backstory: I'd been planning to write about the Newt-working-for-Fox conflict for days. I asked Fox for comment about it this afternoon.

Maybe this is just an instance of Fox splitting with Newt temporarily because of the very visible role he's playing within the Trump campaign -- perhaps formalized by Trump's recent vow that if he's elected, the former House Speaker will be a part of his administration "in one form or another."  It's not necessarily proof that Newt's the guy. Plus, in light of the inherent secrecy surrounding this quadrennial political announcement and the theatrical value of making it a surprise, you'd think that Trump and Newt would be more careful not to let the cat out of the bag with such a foreseeable 'tell.'  Counterpoint: This is the Trump campaign.  Also, let's say it is Newt (I've argued that he's probably the frontrunner, for various reasons).  Why would Fox hand their top competitor this massive scoop?  I could envision a network's HR department and legal team agreeing to play ball and not pre-empt a campaign announcement, but this development -- being treated like a decisive VP indication -- is only rocketing around the internet because Fox consciously delivered this statement to a CNN reporter.  Hmm. Stay tuned...

UPDATE - Might the timeline have been moved up because of this?

NEW: Sources tell me @realDonaldTrump will hold the public event to showcase his VP choice Friday

Place you bets now, everyone.  Until we know for sure, this is my bottom line: Be skeptical, beware of head fakes, and guard against overreactions.  Meanwhile, welp:

Source: No VP pick tonight "unless Trump is like the guy with the engagement ring burning a hole in his pocket.. while the jumbotron is on."

UPDATE II - Just for the convention?

I'm not sure this makes sense to me. They'd cut Newt loose for a few days, perhaps because he's a speaker, then re-engage his contract a couple days later, even though he...would just have spoken at Trump's convention? For what it's worth, Stelter's source is hearing something different.