Lewandowski: 'I Don't Know' Why I Was Fired By Trump 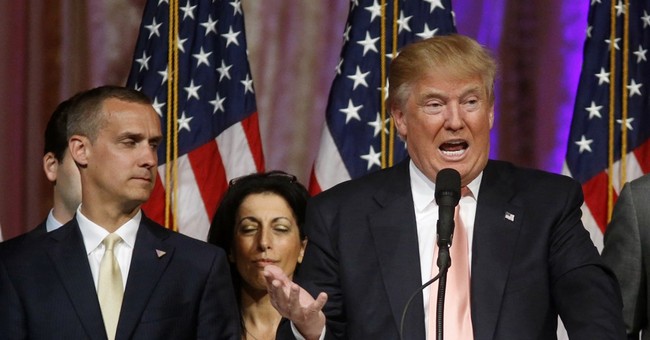 UPDATE - Disastrous. Just disastrous. If you want him to win -- or her to lose -- you should be irate at how unserious his campaign is:

As you reflect on the unfolding Soap Opera that is Donald Trump's presidential campaign, here are a few quotes for you to chew on:

"I don't know." -- Corey Lewandowski on why he was fired.

Corey tells @DanaBashCNN that Trump is "probably the best speaker that our country's ever seen as a presidential candidate."

He's the greatest communicator in American political history, but I have no idea why I -- his hand-picked campaign manager -- got fired. Perhaps Trump just sent the word down without explanation? Nope:

Trump had "direct conversation" w/Lewandowski this am, "completely severed" ties after became clear he was "a problem," sources tell @KellyO

Lewandowski insists that he and Paul Manafort -- whose mutually-destructive leak wars were becoming the stuff of legend -- are on wonderful terms (sure they are), but he didn't mind taking a few swipes on his way out the door. Keep in mind that these sorts of juicy chestnuts are typically reserved for self-serving post-mortem tell-alls after a campaign is over.  But this is 2016, and this is Team Trump:

—@CLewandowski_ reacting to @MichaelRCaputo tweet: He is “not a senior advisor” to Trump campaign, is an advisor pic.twitter.com/hJVasqGJfs

Caputo resigned shortly after sending out that Lewandowski-trolling tweet, prompting this chuckle from Jim Geraghty: "Wait, now the Trump campaign is all about mutual respect, decorum and good manners? Thinking back to an old Dennis Miller joke, this is like getting thrown out of Guns & Roses for missing a Bible study meeting." Adding to the backbiting, here's another erstwhile Trump confidante staffer dancing on Corey's proverbial grave.  Oof:

“Nobody likes to see anybody... get fired," Nunberg said. “Oh wait, Corey called 20 reporters the day I got fired" https://t.co/R0NrYcrvzp

More than anything, I'm increasingly convinced that Lewandowski's dismissal was a direct reaction to a deepening sense of "do something!" panic growing within Trumpworld, compounded by heavy outside pressures.  As we mentioned yesterday, Ivanka Trump has allegedly had her long knives out for Lewandowski ever since he lied about grabbing a female reporter in Florida; the parade of bad news and ineptitude within the bare-bones campaign may have finally given her the pretext she needed to take out the target of her ire:

The candidate's children, who have been involved in strategy from the beginning, saw an opening to achieve a shared goal: Fire Lewandowski. According to two sources briefed on the events, the meeting was a setup. Shortly after it began, the children peppered Lewandowski with questions, asking him to explain the campaign's lack of infrastructure. "They went through the punch list. 'Where are we with staffing? Where are we with getting the infrastructure built?'" one source explained. Their father grew visibly upset as he heard the list of failures. Finally, he turned to Lewandowski and said, "What's your plan here?" Lewandowski responded that he wanted to leak Trump's vice-president pick. And with that, Lewandowski was out. Trump has long viewed announcing his running mate at the GOP convention next month as a valuable card to play. He was shocked that Lewandowski didn't have any other ideas. Shortly after the meeting, Lewandowski was escorted out of the building by Trump security.

Trump was gobsmacked by the eye-popping shortcomings of the man he himself selected to run his campaign?What a surprise. By the way, if you think Lewandowski is about to throw the man who fired him under the bus, think again. Despite some of the unflattering and contradictory things that he's said upon his departure, his glowing assessment of Donald Trump remains as unwavering as ever:

JUST IN: Clinton IT aide to testify this week in email case https://t.co/EFrhjnWMtE pic.twitter.com/dkrHu96dQp