Life Lessons With Donald: Never Hire People Who Are Smarter Than You 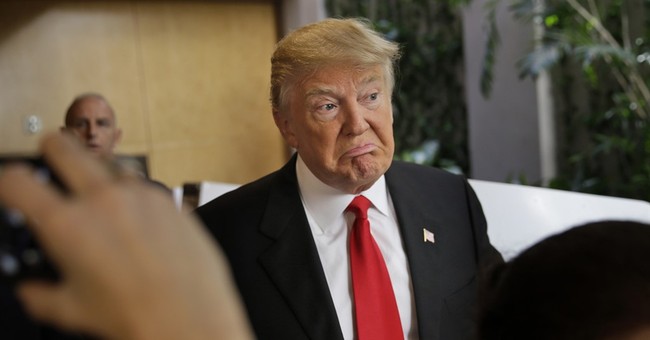 Buzzfeed highlights this pearl of wisdom, which was bestowed upon humanity by Donald Trump in 2007 -- right around the time was advocating the impeachment of President Bush over the Iraq war he opposed from the start (but not really), but prior to donating twice to Hillary Clinton's presidential campaign and praising Barack Obama's "stimulus" boondoggle for saving the US economy.  If this successful management tip sounds familiar, it should, for reasons we'll get to in a moment. Click through for video:


The key to Trump's leadership genius is to ensure that he's always the smartest guy in the room, and to hire accordingly. He says he does want some capable people at the table, mind you, just nobody that might rival or exceed his unsurpassed brilliance. This comment is redolent of the advice he recently dispensed to students in Wisconsin: Always surround yourself with "unsuccessful people," an approach to life that guarantees you'll be the most accomplished and interesting person in any setting, which feels pretty damn good.   When we wrote about those Wisconsin remarks, we wondered how his closest aides (and devoted followers) might feel listening to their hero demean them as the types of second-fiddle losers around whom he feels comfortably superior.  Thanks to Buzzfeed digging up this video, Trump's team can also rest assured that their Obamaesque leader considers himself more intelligent than every single one of them.  They wouldn't have been hired otherwise, based upon Trump's own publicly-stated hiring philosophy.  Of course, many of them would undoubtedly concede their comprehensive inferiority to "Mr. Trump," because that's how these things tend to work. Sad!

On one hand, all of this speaks very poorly of Trump's judgment and maturity, and raises worrisome questions about how he'd go about assembling a 'dumber-than-POTUS' cabinet.  Lincoln (about whom Trump has...thoughts?) had his "team of rivals."  Trump would have his team of relative losers -- with the exception of his top foreign policy adviser, of course.  We know Trump takes this approach seriously based on the D-list squad he's relied upon to run his ground game and campaign strategy, such as it exists, until very recently.  It seems as though he's belatedly realizing that leaving his hand-picked team of incompetent yes-men in place could cost him the nomination, resulting in a late-game course correction that has forced him to grit his teeth and hire some folks with actual knowledge and accomplishments.  On the other hand, it's revealing and refreshing how candid Trump can be on occasion, openly trolling his fiercest sycophants.  He's acknowledged that his core supporters behave like a cult, for whom murder would not deter their unwavering adulation.  As we noted earlier, he's smirked that it's a great life strategy to immerse yourself in mediocrity so that you're always the prettiest girl at the dance.  And he's admitted that his high-octane whining about the "rigged" and "corrupt" nominating process (which he is now calling worse than the Democrats' elite-driven system, just another instance in which Trump sides with Democrats) is purely selective and self-serving, rather than guided by any larger principle.  Speaking of the horribly unfair delegate rules, consider this:


Cruz won more raw primary votes in Wisconsin two weeks ago than Trump did in the much larger state of New York on Tuesday -- yet Trump netted 89 delegates in the latter state, compared to Cruz's 36 in the former.  Where's the outrage, Don?  Allahpundit examines this phenomenon from another angle, using home state victories as a benchmark:

Trump’s now at 522,000 and change in New York. If you don’t like the Wisconsin comparison, we can do home-state comparisons instead. In Texas, Cruz got 104 delegates, about 15 more than Trump will get out of New York, despite pulling in more than twice the number of popular votes (1.2 million) that Trump did last night — and Cruz did it back when the field was bigger and he had to compete with Marco Rubio for conservative support. In Ohio, Kasich won 66 delegates on the strength of 950,000 votes, which means he got fewer delegates than Trump got last night despite topping his New York vote haul by 400,000 votes. In Texas and Ohio, Trump himself received more popular votes (around 750,000 in each) than he received in New York and won a grand total of 48 delegates for his trouble. In fact, thanks to the delegate “bonuses” that state and district winners receive, Trump overall is actually receiving slightly more delegates per percentage point of the popular vote he gets (1.22) than Cruz is (1.14). Shouldn’t every vote count equally?


Cruz isn't screaming about these crooked "injustices" or whatever because he and everyone else knows that these are the long-established rules by which the nomination will be decided. Parting quote from the man who oddly didn't make a peep about the legitimacy of his New York delegate haul that disproportionately exceeded his actual vote totals among We The People: “Don’t forget, I only complain about the ones where we have difficulty.” Yup.