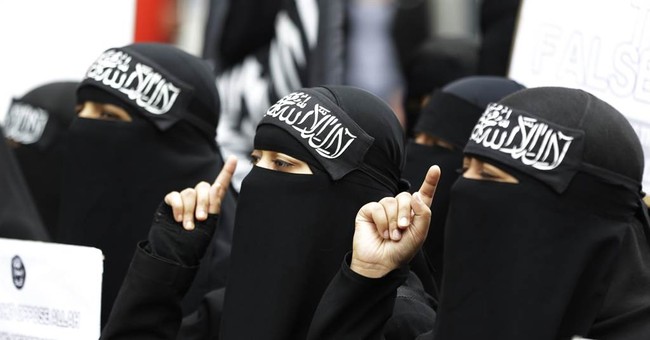 A new comprehensive survey of Muslims living in Great Britain is raising new concerns about assimilation and shared values, as significant percentages of poll respondents espouse at least some views widely seen as illiberal within Western societies. In light of deadly ISIS attacks in two European capitals within the past year, and the revelation that thousands of Muslims from Western nations have traveled to join the terrorist army, the bombshell study hoists red flags pertaining to failed immigration policies and widespread integration struggles -- and highlights the perils of excessive politically-correct multiculturalism. A glimpse at several findings:


Approximately a quarter of those polled express support for the institution of Islamic Sharia law in Muslim-heavy pockets of sovereign Britain, while a large plurality believe that women must "always obey" their husbands. Far more British Muslims believe that a man should be permitted to "keep more than one wife" than say homosexual conduct should remain legal. A majority of respondents favor the criminalization of same-sex relations.  (For some imperfect but relevant perspective, a slim majority of regular US churchgoers embraced a similar public policy stance as recently as 2003).  There were less worrisome poll results within the data set, as well: Just five percent embraced stoning as an appropriate punishment for adultery, and only four percent described themselves as sympathetic to suicide bombings and acts of terrorism.  "The research suggests that 86% of British Muslims feel a strong sense of belonging in Britain, which is higher than the national average of 83%," reports the UK Guardian. "Of those questioned, 88% said Britain was a good place for Muslims to live in, and 78% said they would like to integrate into British life on most things apart from Islamic schooling and some laws."

While some of those numbers are at least partially reassuring, resistance to assimilation on education and 'some' laws seems like a fairly significant caveat in that formulation.  Also, consider the problem of scale: Great Britain is home to more than three million adherents of the Islamic faith, roughly half of whom were born abroad.  That number is projected to soar to six million by 2050.  Based on current population rates and the new data, well over 100,000 British Muslims are self-identified terrorist sympathizers, and close to half-a-million lack a "strong sense of belonging" in their current home country.  That is a frighteningly large pool from which potential radicals might be recruited -- all within the UK's borders.  I grappled with some thorny questions about what constitutes "radical" Islam in a post written last year, noting that tens of millions of Muslims worldwide endorse terrorism or violence on some level, while many millions more embrace anti-freedom views on issues like censorship and blasphemy.  I linked to a 2006 poll of British Muslims that revealed disturbingly high levels of respect of Osama bin Laden, as well as widespread acceptance of anti-Semitic conspiracies.  One of the most striking elements of the newly-released survey is the companion analysis it has spawned, furnished by a somewhat unlikely source:

Phillips commissioned a report into Britain and Islamophobia in 1997 which, according to both Phillips himself and academics across the country, popularised the phrase which has now become synonymous with any criticism of Islam or Muslims. “It’s not as though we couldn’t have seen this coming. But we’ve repeatedly failed to spot the warning signs,” he now writes in The Times , in response to new data collected. “Twenty years ago… I published the report titled Islamophobia: A Challenge for Us All, we thought that the real risk of the arrival of new communities was discrimination against Muslims. Our 1996 survey of recent incidents showed that there was plenty of it around. But we got almost everything else wrong....Indeed, a significant minority of Britain’s three million Muslims consider us a nation of such low morals that they would rather live more separately from their non-Muslim countrymen, preferably under sharia law. This sobering conclusion comes from the most comprehensive survey of British Muslims ever conducted, commissioned by Channel 4. Having been asked to examine its results, I believe it holds a grim message for all of us. There is a life-and-death struggle for the soul of British Islam—and this is not a battle that the rest of us can afford to sit out. We need to take sides."


Powerful, arresting conclusions from a man of the Left, who has devoted much of his life to equality and human rights. He's shifted from issuing harsh admonitions against "Islamophobia" to sounding the alarm against creeping Islamization, candidly admitting that he got many important things wrong in his 1997 report. Of particular interest are his references to "ghetto villages" and "nations within nations," the very existence of which many on the Left have angrily denied in recent years ("no-go zones" in particular).  The unpleasant reality that certain neighborhoods of European cities have become quasi-autonomous Islamist havens is once again being thrust into the spotlight.  Here's Erik Wemple writing in the Washington Post last November, citing the New York Times and quoting a Belgian government minister effectively confirming that "no-go zones" are not, in fact, pure figments of right-wing fever dreams.  Bear in mind that this article was published months before the Brussels massacre, after which it became public that a fugitive Paris attacker had been harbored in Belgium's infamous Islamist stronghold for weeks on end:

The New York Times didn’t use the term that shall not be uttered. But the headline of this story from yesterday afternoon suggested it: “Belgian Minister Says Government Lacks Control Over Neighborhood Linked to Terror Plots,” wrote Kimiko De Freytas-Tamura and Milan Schreuer. Jan Jambon, the Belgian home affairs minister, said that authorities do no “have control of the situation in Molenbeek.” Molenbeek is a Brussels borough that, according to the Guardian, is “becoming known as Europe’s jihadi central.” Two of the assailants from Friday night’s Paris attacks were French nationals who had resided in Molenbeek, prosecutors have said. Five arrests were made in Molenbeek in connection with the attacks, Reuters reported...Molenbeek has also had connections with other terrorist incidents, including the attack on an Amsterdam-to-Paris train last summer that was snuffed out by U.S. servicemen. So, is Molenbeek a “no-go zone”? The Independent seems to think so: “Paris terror attacks: Visiting Molenbeek, the police no-go zone that was home to two of the gunmen.”


Click through for a chilling profile of a 'jihadi Santa' who operated in Molenbeek for years, as well as this story about an assimilation uproar in Switzerland (stick with it until you reach the punch line about the boys' social media activity). While it is both morally correct and strategically important to guard against overreach and demagoguery in response to threats, both real and perceived, blithely maintaining a course of happy talk and public preening does a profound disservice to the pluralistic values that must underpin civilized societies.  Simply shouting "racist!" or "Islamophobe!" in the face of discomfiting information and a growing body count does little more than shut down needed debates and discussions about sensitive matters.  We can and must recognize that the vast majority of Muslims -- particularly those living in the West -- neither condone violence nor hold problematically liberty-averse views.  We must also praise and support those Muslim leaders who courageously, loudly and clearly speak the truth.  But the other side of that same coin requires us to recognize that a sizable strain of one of the world's leading religions promulgates a poisonous theology that threatens the way of life -- if not the literal lives -- of free people everywhere.  That statement is not bigotry.  That statement is fact.  I'll leave you with a heart-wrenching account of a desperate California father agonizing over his decision to alert authorities to the increasingly troubling behavior of his young son, whose Islamist radicalization became painfully apparent over recent years.  Read the whole thing; it's haunting.