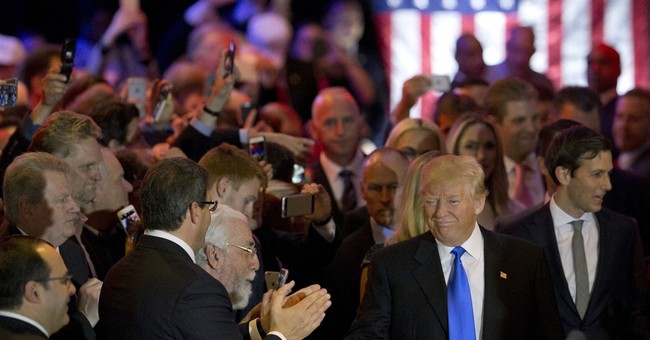 In light of his blowout win over Ted Cruz in Indiana, Donald Trump will be the Republican Party's presidential nominee, barring some unforeseen development or act of God.  Cruz played every card in his deck in a desperate bid to stave off his rival in the Hoosier state, and lost.  Badly.  Out of options, he has exited the race (with John Kasich on his way out, too), clearing the way for Trump to capture the party's crown with little drama in Cleveland.  A few thoughts on these developments, and on what comes next:

(1) Congratulations to the Trump campaign, which has defied all expectations -- including, reportedly, their own. When the celebrity billionaire descended that Trump Tower escalator months ago, he was received by many as an amusing sideshow. A joke. He proceeded to deliver a rambling speech to the assembled reporters and paid actors posing as supporters, during which he was briefly interrupted by walk-off music, when the tech team mistakenly thought he was finished. A speck of spittle formed in the corner of his mouth as he uncorked a grievance-driven stream of consciousness that previewed the broad-strokes messaging that would ultimately blaze his path to the GOP nomination. At the time, I confidently and wrongly predicted on Fox News that there was no chance he'd become the Republican standard-bearer. As Trump rose in the polls and sustained his lead over a span of many summer weeks, I became disabused of that notion. The rest of the Republican field, with the notable exception of Scott Walker, never woke up to this reality until it was too late. Many labored in denial over critical months, attacking each other under the self-serving and woefully mistaken theory that Trump would eventually implode. But when mocking John McCain's POW status, ridiculing a disabled journalist, insulting Carly Fiorina's physical appearance, floating unhinged conspiracy theories after losing Iowa, and loudly siding with Code Pink and MoveOn.org over George W. Bush (among countless daily kerfuffles and insults) all failed to crush his candidacy, it should have been abundantly clear that Trump was well on his way to executing a hostile (if temporary) takeover of the Republican Party. Some of us have resisted that outcome every step of the way. We've failed. A plurality of GOP voters decided that come hell or high water, he should be the guy this year. And now he is.

(2) Trump remains virtually unelectable.  His unfavorable ratings are the highest ever measured for a major party nominee. He is particularly unacceptable to women, young voters and people of color -- who represent a majority of voters, the largest age-based voting demographic, and America's ascendant electorate, respectively.  The controversial mogul has trailed Mrs. Clinton head-to-head in virtually every poll for months on end, often by double digits. Here's a fresh data point out this morning:


This comes on the heels of a Florida poll that gives Clinton a very similar lead -- which, in fairness, may prove to be an outlier. A string of state-level surveys suggest that with Trump as the GOP nominee, Hillary Clinton is well-positioned to make plays for reddish battleground states, as well as some dyed-in-the-wool Republican enclaves. I've argued that Trump vs. Clinton polling is useful at this stage in the race because both candidates have virtually universal name recognition.  Everyone knows who they are, and almost everyone has an opinion about each of them.  Also, head-to-head polling historically begins to become predictive in April.  It's now early May.  Donald Trump is a heavy, heavy general election underdog.

(3) For what it's worth, I predict that in the coming weeks and months, Trump will close the polling gap with Clinton a bit.  Partisan tribalism is a powerful thing, and as more Republican-leaning voters make peace with their unlikely, flawed nominee, they'll rally around the team's flag.  This will especially be true as many of these voters experience routine whiffs of the fetid stench of Hillary Clinton's unaccountable, arrogant, deceitful anti-charisma.  I also predict that a sizable percentage of conservative voters will never reconcile themselves to Trump's candidacy -- due to an insurmountable blend of ideological, character and temperamental objections.  For full disclosure, I place myself in this camp.  We #NeverTrump holdouts will probably prove statistically insignificant, though, at least as compared to the other electorate-driven factors that are likely to doom Trump in November: A yawning gender gap, a massive, Obamaesque mobilization on the center-Left, the flight of independents, and the country's shifting demographics.

(4) In my second bullet point above, I referred to Trump as "virtually" unelectable.  Why not flat-out unelectable?  My hedge arises from a few factors: First, humility.  Having been wrong about Trump initially (despite a serious course correction relatively early on), I'm self-aware enough to recognize that nobody has a special crystal ball; myself least of all.  My general election analysis is driven by solid, consistent data, but it's possible that the data could change.  How? My second hedge: Events.  If Mrs. Clinton is indicted for her outrageous, national security-compromising email scheme, and if there's some sort of major terrorist attack (God forbid) on US soil, things could get awfully unpredictable in a hurry.  The third thing going for Trump is the profound and enduring unpopularity of his opponent.  Yes, he's trailed her on almost every key metric for quite some time, but she is still widely disliked and distrusted.  And she often has terrible political instincts.  As loathsome and amoral as he is, Trump can also be compelling and charming.  She shares the former flaws and lacks the latter qualities. Keep in mind, this is a woman who lost Indiana to a rumpled Socialist who has all but given up on winning the Democratic nomination.

(5) Regardless of one's feelings about Trump -- and I've made mine crystal clear -- his presence in the general election will solidify 2016's historical status as a memorable, wild, and possibly epochal cycle.  The race will be horrifying and depressing at times, but it will be exceedingly entertaining at others.  Engagement and interest will run very high, and very hot.  It will be fascinating to see whether the coming grudge match between two broadly-despised former friends will ultimately drive turnout up or down.  Either way, political scientists, media critics and historians will be writing and talking about this presidential election for generations.  Buckle up.