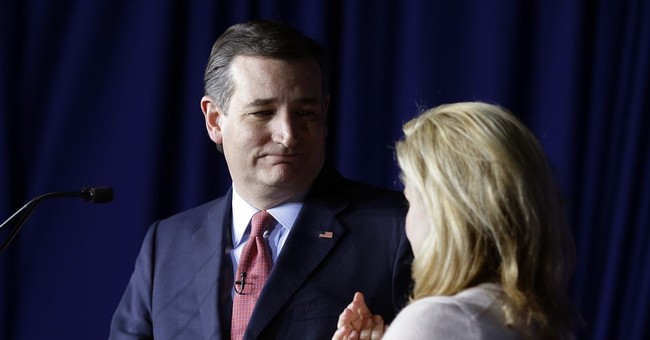 As Christine noted earlier this evening, Sen. Ted Cruz (R-TX), the conservative’s conservative, has ended his presidential ambitions after devastating defeat to billionaire Donald Trump. Trump had momentum after his decisive victories in the Acela Corridor primaries, which only further increased his significant delegate lead.

As former Hewlett-Packard CEO Carly Fiorina took the stage to introduce the senator, she said that both she and Cruz had “fallen in love” with the Hoosier state.

"This is a man who favors substance over sloganeering," she added. "Who favors respect over insult. Who favors positive policy solutions over hand waving.”

Upon taking the stage, Cruz delivered his usual anecdote about his family’s roots, the story about his father’s very humble beginnings, and how the dividends reaped from fleeing Cuba was allowing him to cast a ballot for his son running for the highest political office in the land. Then, came the bombshell, where the conservative fighter said, “from the beginning I've said that I would continue on as long as there was a viable path to victory. Tonight, I'm sorry to say, it appears that path has been foreclosed.”

‘‘Together, we left it all on the field of Indiana. We gave it everything we’ve got, but the voters chose another path, and so with a heavy heart but with boundless optimism for the long-term future of our nation, we are suspending our campaign,” he added.

Yet, just because Cruz’s presidential ambitions are over, does not mean he’s finished fighting for liberty and constitutional principles.

“I am not suspending our fight for liberty, to defend the Constitution,” he said. “I will continue this fight with all of my strength and all of my ability.”

The state seemed tailor made for Cruz, given the large evangelical population and scores of high-income, college educated conservatives that break for Cruz, though Trump also had strength with the state’s white working class voter bloc. Moreover, Trump, according to ABC News early exits, showed that 70 percent of Republican voters were worried about the economic heath and direction of the country; Trump tends to do well in states where that level of dissatisfaction is high. Also, 60 percent of Indiana voters wanted a political outsider, another check in the Trump column (via FiveThirtyEight):

In many respects, Indiana should be a terrific state for the Cruz/Carly Fiorina pre-ticket. Indiana has the highest share of evangelical Protestants of any state yet to vote — 31 percent — which is 9 percentage points higher than in Wisconsin, the site of Cruz’s last triumph. In the 2012 GOP primary, the state’s GOP voters toppled Sen. Richard Lugar, a 36-year moderate fixture, in favor of Cruz’s fellow Tea Party purist Richard Mourdock. (Though Mourdock lost the general election to a Democrat, Joe Donnelly.) And like Wisconsin, Indiana has a robust population of well-educated, high-income conservatives — types that have favored Cruz — particularly in the northern Indianapolis suburbs.

However, here’s why Indiana could be an even better Trump state: It boasts the highest share of manufacturing jobs in the country. From steel mills on the shores of Lake Michigan to the medical device hub of Warsaw, to Elkhart, the “RV capital of the world,” Indiana’s blue-collar workforce — and its blue-collar retirees — are machine-made for Trump.

And they stood firm with Trump when it came time to cast their ballots. CNN  added that the Cruz campaign also made some strategic mistakes, like not sending Fiorina to key counties to shore up support in the final days leading up to the primary.

The Cruz campaign's biggest strategic error in Indiana could prove to be its decision to keep vice presidential pick Carly Fiorina -- who stood a much better chance of appealing to suburban women who make up a huge chunk of that doughnut county electorate -- with Cruz in urban and rural areas, rather than sending her to Hamilton, Boone and Hendricks counties, where she could have helped solidify Cruz's support.

In the end, Trump won evangelicals, and pretty much every other demographic.

So, for Cruz, his presidential train ended in Indiana, but he’s still an elected official from Texas. And he’s still got a job to do, especially if Hillary is elected in November.