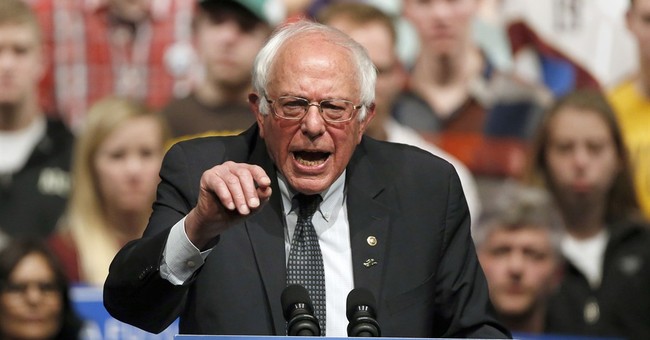 UPDATE: Lots of recriminations and pearl-clutching on the Left yesterday and today after Bernie Sanders channeled Marco Rubio and called Hillary Clinton unqualified to be president. This, after Clinton tied Sanders' heterodoxies on gun rights  to the Sandy Hook massacre of elementary school children. A very tame race is getting a bit heated, as Leah noted earlier. Watch:


Much of the Left is rallying to Hillary's defense, calling her eminently qualified to be president.  They're fine with someone who lies to terror victims' families, lies about her email scheme that knowingly compromised national security, and whose 'accomplishments' they can't even list.  Meanwhile, Socialist Sanders seems to have no idea how to actually be president.


Interesting approach here from Democrats' presumptive frontrunner, who's lost seven of the last eight contests to her Socialist opponent, yet whose invincibility narrative is being propped up by elitist 'Super Delegates'. Her team has been whining about Sanders' "tone," which seems positively quaint, given the verbal bazookas being fired daily on the GOP side of the race. She's also taken to patronizing many core Bernie supporters, saying that she feels sorry for them -- those sad, silly little mini-'protesters' who annoyingly keep voting for someone they actually trust. Now she's also questioning whether Bernie's even really a Democrat:

Sanders had just told an interviewer that he was iffy about raising money for down-ballot Democrats, so I asked Clinton the obvious question: Did she think Sanders is a real Democrat? “Well, I can’t answer that,” she said with a smile. Then she proceeded to answer the question. “He’s a relatively new Democrat, and, in fact, I’m not even sure he is one. He’s running as one. So I don’t know quite how to characterize him.” Clinton’s stock line as she has watched Trump & Co. savage one another for months has been some version of don’t-speak-too-ill-of-any-Democrat. But things have changed over the past couple of weeks, with Sanders’ team ratcheting up its attacks and speaking openly about a contested convention, GOP style. She was ticked off — already factoring in an inevitable loss in Wisconsin on Tuesday...She even suggested for the first time (in public, anyway) that the septuagenarian from Vermont was feeding a simplistic, cynical line of argument to turn young voters against her. “There is a persistent, organized effort to misrepresent my record, and I don’t appreciate that, and I feel sorry for a lot of the young people who are fed this list of misrepresentations,” Clinton said, a few minutes after talking herself hoarse at a rally here. “I know that Sen. Sanders spends a lot of time attacking my husband, attacking President Obama. I rarely hear him say anything negative about George W. Bush, who I think wrecked our economy.”


Her husband actually holds quite a lot of responsibility for "ruining the economy" by using coercive government social engineering to force lenders to artificially inflate the housing bubble that finally burst, but that's an issue for another day. Hillary is 'ticked off' because millions of center-left voters want nothing to do with her. She believes the presidency is her birthright, and now is finally her time, especially after the unpleasantness of 2008. She says she isn't sure whether Bernie Sanders should necessarily count as a Democrat. Voters in 16 Democratic primary and caucus contests thus far seem to believe that he does, choosing him over her.  She gets consistently walloped by Democratic voters who prize trustworthiness as a candidate quality, particularly among Millennials.  Perhaps rather than talking down to these voters and dispatching surrogates scurrying across the media with their latest "resistance is futile" talking points, she should stick to policy arguments against Sanders.  He's handed her some easy material recently, showcasing his embarrassing lack of specifics on foreign policy, and betraying a bizarre insouciance about how he'd logistically implement his Socialist-Populist domestic agenda.  Instead, she's flailing heading into her "home state" of New York, admitting on an open mic that she needs to turn the energy of the race around:


By the way, the strongest evidence that "Bernie's a DINO" won't work -- aside from the millions of Democratic voters who've sided with him -- is Hillary's rhetorical and policy migration in his direction. Hers is a hard-Left party, the heart and soul of which is embodied by the likes of Barack Obama, Elizabeth Warren and Bernie Sanders. So transparently desperate is Hillary to pander to Bernie's improbable youth movement that SNL recently ridiculed it in a fake ad portraying Hillary Clinton gradually physically morphing into Sanders, begging young people to like her:


Maybe she's given up on winning their votes -- maybe ever -- so she's patting them on the head and sending them on their way, confident that party bosses will ensure her eventual victory, no matter how often Bernie beats her.  I'll leave you with some advice from David Axelrod:

Line @HillaryClinton should drop: "...I feel sorry for the young people who are fed this list of misrepresentations." It's patronizing.