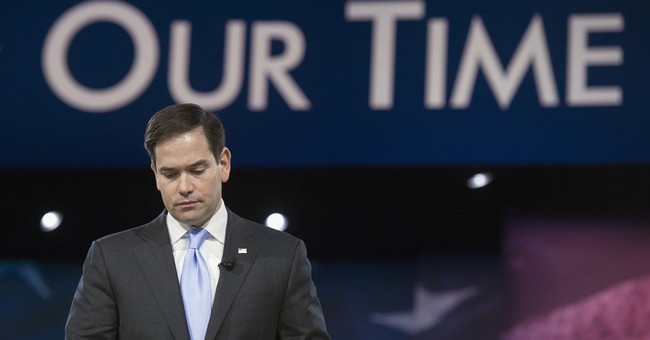 The current conventional wisdom percolating across the media is that Marco Rubio may be finished. His Super Tuesday showing was mediocre at best, his flu-addled debate performance paled in comparison to Cruz's, his Saturday vote totals were ugly, and some polls show him fading into last place in Michigan. Beyond all that, there are tough questions being raised about his team's underperforming strategy and organization. On the other hand, Rubio has notched two primary/caucus wins within the last week, carrying Minnesota by double digits -- and dominating in Puerto Rico, sweeping its 23 bound delegates.  His favorable rating among Republicans (and voters generally) remains much stronger than Cruz or Trump's, and his polling average against Hillary Clinton is the best of the three. Still, another bad night tonight, or a dud of a debate in Miami on Thursday, would only fuel the burgeoning negative narrative. It's broadly understood that if Rubio loses his home state of Florida to Donald Trump on March 15, it's all over for him. So how is that race shaping up?  We've seen a number of polls showing the billionaire stomping the first-term Senator on his home turf by double-digits, but several new statewide surveys with tighter eligibility screens (Florida is a closed primary, meaning that only registered Republicans may vote) show a competitive, single-digit race.  Matt wrote up a private survey pointing to a five-point race yesterday, just before a fresh Monmouth poll dropped. A few observations on the numbers and recent history:


Some caveats are in order: First, it's dangerous to draw statistical conclusions about early vote trends based on a single (small) subsample of a single poll. Second, just because polling in other states has overstated Trump's support by a substantial margin, that doesn't mean that trend will continue in Florida.  Remember, Trump has overperformed his public polling in other places, including several Southern states.  But let's say Rubio has banked a serious lead with early voters in his home state, and that he recaptures his penchant for closing strong among late-deciders (think Iowa, South Carolina, and Virginia, etc).  That could be the roadmap to pulling off a desperately-needed win in Gatorland.  Also, consider this data point:


In several states, Trump's strength has been in early voting, not on election day.  If Monmouth's numbers are accurate -- or close to it -- he'll have to reverse that dynamic in Florida.  Crucially, the Sunshine State's 99 delegates are awarded on a winner-take-all basis. Pulling in that haul would be a boon to Rubio's campaign; conversely, it would be an important step toward winning the nomination outright for Donald Trump.  As such, here are the anti-Trump crowd's rooting and voting interests heading into next Tuesday, based on the game plan of preventing the frontrunner from collecting 1,237 delegates prior to the Cleveland convention:

It's this simple: you vote Kasich in OH/MI, Rubio in FL, Cruz in MO if you want to stop Trump. Nothing else. No "Cruz here" or "Rubio there"


Meanwhile, I've seen some anger directed at Ted Cruz from Rubio supporters online, arguing that by making a (futile, according to polling) play in Florida, the Texan is sabotaging Rubio and helping Trump.  After all, they argue, there are no proportionally-allocated delegates on the table for Cruz to pick off.  But here's an alternate theory I've seen floating around: What if Cruz is focusing on Trumpier areas of the state?  If Cruz more or less allows Rubio to run up his numbers in South Florida and target key voting blocs (there's a large Puerto Rican population in the middle of the state, for instance) while siphoning off potential Trump voters in northern Florida and elsewhere, he might -- might -- actually be helping Rubio.  How Cruz deploys his resources and eventual exit poll evidence will either vindicate or disprove this theory.  Cutting against it is the matter of a pro-Cruz SuperPAC going up with new anti-Rubio ads.  Eye on the ball, guys.  Speaking of Cruz, he's enjoyed a robust week, beating Trump in five nominating contests, compared to Rubio's two.  And in an effort to solidify the sense that he's the best 'stop Trump' option left in the race, his campaign is reportedly on the brink of rolling out several Senate endorsements, in addition to Mississippi's governor.  Cruz has heretofore failed to secure the public backing of any of his upper chamber colleagues.  I'll leave you with yesterday's rumor du jour, which Team Rubio has furiously batted down. Regardless of whether this is an early indicator of the wheels coming off, or a dirty trick planted by a rival campaign, Team Rubio seems genuinely incensed that CNN ran with the story without even asking for comment. They have a point:

Quite the report: Advisers *within* the Rubio campaign are advocating dropping-out *before* the Florida primary. https://t.co/yPJ8jWJYSv

Yeah, report doesn't make much sense at all... https://t.co/gDQELJ2Cyg


Next week is do or die.