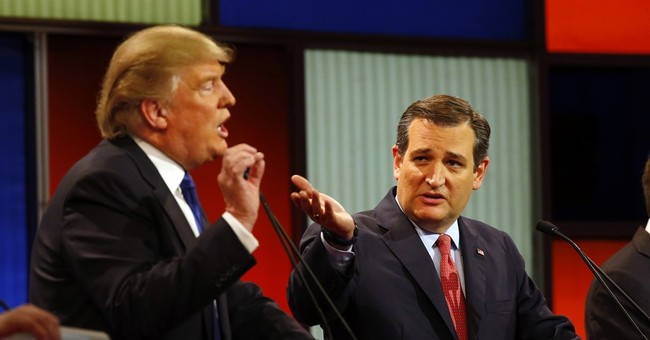 Conservative Senators Ted Cruz and Marco Rubio reprised their roles as fierce Trump critics at last night's presidential debate in Detroit, relentlessly attacking the frontrunner they're both chasing. Their positioning last night, as in the recent Houston debate, was symbiotic. One would punch at Trump and land some blows, then the the other would follow-through, maintaining pressure on the billionaire. A few additional thoughts on each candidate:

(1) Ted Cruz won this debate. He was sharp, focused, and ruthless throughout the event, turning Trump attacks into effective counter-assaults. His strongest moments were pressing Trump hard on his multiple donations to Hillary Clinton's 2008 presidential campaign, a theme he tied in to several subsequent answers. He was also prosecutorial in his insistence that Trump allow the New York Times to release audio of an off-the-record conversation about immigration.  Trump refused several times.  He also took a Trump taunt about polling and turned it into a key point. Trump touted a CNN poll indicating that he holds a very large national lead in the Republican primary. Cruz countered with that exact same poll, which shows that both he and Rubio lead Hilary Clinton in that survey's general election ballot question, whereas Trump loses handily. Even when he wasn't savaging Trump, Cruz offered poised and commanding answers across a litany of issues.  His response upbraiding decades of failed left-wing leadership in the city of Detroit was powerful, as were his points about the Supreme Court.  Very strong night for him.

(2) Marco Rubio performed well. As usual, the Floridian performed ably on the debate stage, challenging and prodding Donald Trump repeatedly -- while laying off Cruz (who returned the courtesy). His feistiness in the early moments of the debate set the tone, calling Trump out for always responding to substantive criticism with personal, superficial answers. Trump confirmed this critique over and over. Rubio was especially aggressive in blasting Trump on his failed scam university, at one point baiting the billionaire into admitting that he'd refunded "many" dissatisfied customers. This, after Trump misleadingly insisted that 98 percent of students were pleased with their experience, and falsely claiming an A rating from the Better Business Bureau. In the waning years of Trump University's existence, it received D and D-minus ratings. Like Cruz, Rubio was fluid and conversant on a wide array of issues, often circling back to Trump's lack of seriousness and specific knowledge. One of the funniest moments of the debate came when Cruz ridiculed Trump for his constant interruptions, encouraging him to "breathe." After a joking exchange about yoga breaking out on stage, Rubio interjected, "he's very flexible," referring to a previous answer from Trump.  Clever and nimble. The reason Cruz won over Rubio is that the latter seemed a little more fatigued than usual at times, and occasionally appeared to cross a line into petty bickering. Doing so rattled Trump, but set up Cruz for more effective answers. Sitting in the CPAC debate watch party (hosted by Townhall Media) there was a palpable sense among the large anti-Trump majority that the two young Senators' alliance ought to expand beyond the debate stage.

(3) John Kasich excelled with his niche. He may not have a path to the nomination even if he wins Ohio, but the governor played his hand extremely well last night. Over and over again, he returned to his core message: While these guys bicker and insult each other, Americans want an adult with a proven record of actually helping people and accomplishing things -- and that's me. That's been his schtick for months. It felt timely and compelling on that stage last.  And according to Frank Luntz's focus group, Kasich's tone and message scored.

(4) Donald Trump remains the man to beat.  For the second consecutive debate, he was exposed as a policy...well, lightweight, both by his rivals and by Fox News moderators. On multiple occasions, Fox hosts fact-checked Trump in real time, unmasking flip-flops, incoherence, and policy vacuity. Whether this has an impact on voters remains to be seen, but I wouldn't bet on a significant shift. One of his most potent comebacks is to deride his opponents as chattering, do-nothing politicians. He used it frequently last night, triggering applause from his supporters. If Cruz and Rubio were able to raise significant doubts about his business success and acumen (and his immigration stance), that could have an impact. But the question is, have these attacks come too late in this process to really sink in and alter the outcome?  Perhaps. Trump's best answer of the night was his last one, when he laughed off the suggestion that anyone else could win the nomination, talked up the GOP enthusiasm gap over Democrats this cycle, and reiterated his loyalty pledge in an almost pitying way.  A good close for him.  There's still a path to defeating him, but it's an awfully tough one.  Also, Trump raised a 9/11 conspiracy theory unchallenged, and raised the topic his own small hands -- making reference to the size of his manhood from a presidential debate stage.  So that happened.  I'll leave you with this:

I beat Hillary Clinton in so many polls. pic.twitter.com/ZuihiRzlz0