Just a friendly reminder on Super Tuesday that the general election is, you know, a thing. Note CNN's chyron, in addition to the numbers:


Nonsense, Trump followers will exclaim. That's just one biased poll, plus it's too early to draw any conclusions!  Well, it's the very same "biased" poll that Trump folks trumpeted far and wide yesterday when it showed him holding a dominant national primary lead over both Marco Rubio and Ted Cruz.  Ahead of the November election, the two conservative Senators lead Mrs. Clinton in this survey, with Rubio hitting majority support.  Trump trails Clinton well outside the margin of error; she draws a 52 percent majority against him.  We often hear boasts from Trump that he's beating Clinton in the polls.  Nope: 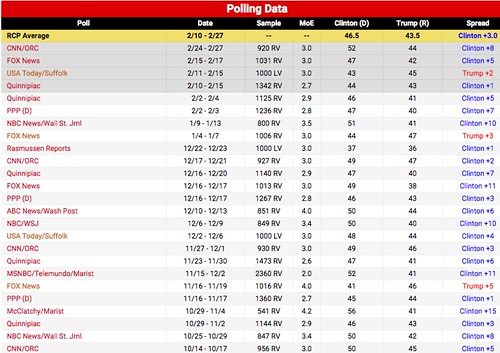 In the RCP average, Cruz leads Clinton by 1.5 percent.  Rubio is up by five points.  But one-on-one hypotheticals don't matter at this stage!  Generally true.  Fair point.  However, this is a rare case in which both Trump and Clinton enjoy longstanding, universal name recognition.  The American people know who these people are, and how they feel about them.  And in light of the saturation coverage of his campaign, voters are aware of the overall themes of his campaign.  All of which is to say that this hypothetical match-up data is less insignificant than usual.  But as I've written previously, the fundamentals are more telling at this juncture, and Donald Trump's fundamentals have been consistently horrific over a span of many months:

'But it's just one poll,' Trump ppl squeal. Check stability of these godawful #'s, which are worse than HRC's: pic.twitter.com/VBfOepAyfu


Click through for evidence of Trump's fatal weakness among key swing voting blocs, like women, Hispanics and young people.  Democrats will ruthlessly cast Trump as an ignorant, clownish bigot -- using his own words (or lack thereof) to build their case.  The media that has elevated him with unprecedented coverage will turn heel and join in his destruction.  Most right-of-center voters will eventually gravitate towards him, barring a serious third party effort, but a substantial number of movement conservatives will refuse to vote for him.  This is a recipe for electoral disaster.  It's still avoidable, but perhaps not for long.  I'll leave you with this sad attempt at self-convincing by the thinnest-skinned man in America:

Trump: "He said I have small hands... I've never heard that before. I've always heard people say 'Donald you have the most beautiful hands."