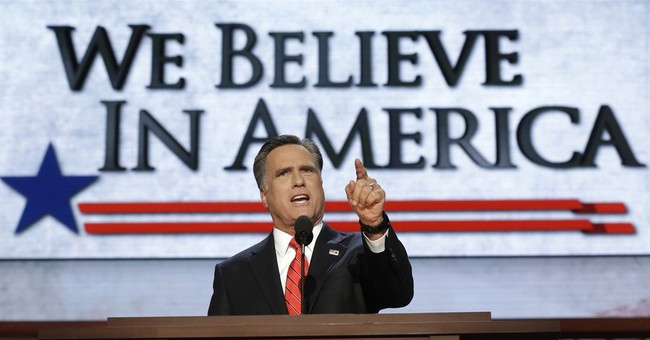 By now you've heard that Mitt Romney will give an anti-Trump address in Utah this morning, in which he will reportedly neither endorse any of Trump's rivals, nor announce an independent bid for the presidency. Here's what he will do:

Romney’s comments will be focused on “the state of the race,” likely echoing past criticism of Trump for failing to release his tax returns and for not decisively distancing himself from the KKK, the source said...Former top Romney aide Katie Packer told CNN that Romney "wants to sort of continue to be a voice, an adult in the room, if you will, that’s just sort of reminding these candidates that this is a very big office, and that the rhetoric should sort of match the importance of the office that these candidates. And I think that he’s hoping to do that tomorrow."


What, exactly, is Romney seeking to accomplish here? There's no way he believes his criticism of Trump will sway a single Trump follower, given how hard Trump's been swinging at him as a fool, a loser, etc.  Plus, the mark of a true blue Trump follower is his or her steadfast refusal to be swayed by anything.  That's how cults of personality operate.  In any case, the type of Republican voter for whom Romney's admonition might theoretically make a difference is almost certainly already alarmed by Trump and backing another candidate.  So this isn't a vote-moving exercise.  I think the former Republican presidential nominee is doing a few things here:

(1) He's once again focusing the media's attention on Trump's tax returns, about which he's been trolling the reality show star for several days.  Trump has responded with a flurry of insults and unfounded excuses, employing highly politicianesque parsed language about making future "determinations," and the like.  He's hiding something (perhaps beyond his hilariously exaggerated wealth), and Republican voters deserve to know what it is, especially given the shinola-storm the Left will throw at him if he's the nominee.

(2) He's doing the non-Trump field a solid by lending his "adult in the room" voice to try to at least tap the breaks on any Trump endorsements being mulled by establishmentish figures within the party.  He won't be able to keep the dam from bursting forever, of course, but maybe he's trying to buy Rubio, Cruz, et al a week or two to accomplish what they need to do on March 15.  If Trump carries the delegate-rich winner-take-all states of Florida, Ohio and Illinois that Tuesday, he'll be virtually impossible to stop.  If most of those delegates are assigned elsewhere, the long slog to Cleveland can continue.

(3) I'll let Allahpundit take this one:

"This does...look an awful lot like Romney putting himself back on the radar of #NeverTrump conservative voters at the very moment that they’re starting to look around for an 'in case of emergency, break glass' candidate. I think that’s the theme he’ll pursue tomorrow: Never Trump. He’s going to say that Trump is unfit for the GOP nomination for a hundred different reasons, from his temperament to his leftish policies to his proclivity for scams like Trump University to his dodging when asked about David Duke in that interview with Tapper...[The takeaway] will be that conservative voters must have a principled choice available to them in the general election. They can’t be forced to decide between two liberals from New York. He won’t say who that choice will be or that he has any plans to run; it’ll be a pure 'conscience of a conservative' speech denouncing Trump. But I think it’ll also be clear afterward that if Rubio can’t close the deal in Florida on March 15th, you may be hearing from Romney again. And the next speech will be a little more concrete than this one."


Could be.  If Trump looks inevitable in mid-March, does a serious third party effort materialize?  And even if there's a will, is there time to get all of the logistics in order (click through, if only for the irony of that headline)?  Let's say 'yes' to both, for the sake of argument.  Despite some obvious flaws, the former Massachusetts would have to be on the very short list to lead this gambit.  He's got universal name ID, fundraising chops, a political base, and the chance to appeal to a heck of a lot of voters who'd have little interest in backing Clinton or Trump.  A lot of people have wondered why Romney hasn't publicly endorsed his preferred candidate, who is said to be Rubio.  If this address is all about an elder statesman raising grave concerns about the direction of the party, he could make his point with a big megaphone at a splashy endorsement rally.  That hasn't happened.  It would follow that if Romney has an emergency independent run in mind, he might just be keeping his options open.  And if all of this sounds like a wild, fantastical long shot...you're of course correct.  But welcome to the 2016 cycle.  Stay tuned.