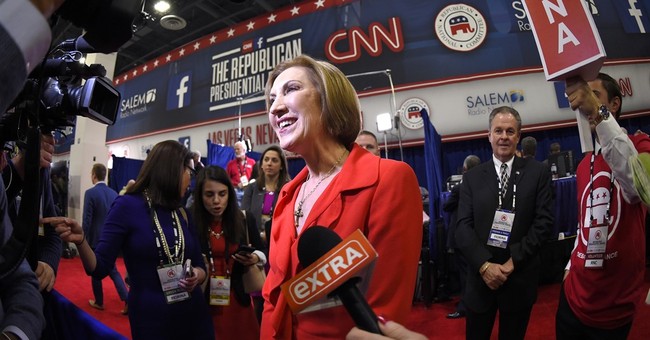 As Christine reported earlier, Carly Fiorina has suspended her 2016 presidential campaign, effectively ending her long-shot bid for the White House. Upon her departure from the race, many conservatives are taking the opportunity to applaud her contributions over the last few months, myself included:

Fiorina is out. But she should've been allowed in the last debate. She's very effective taking on Hillary. https://t.co/fiYTRmWu1E

Tough to see @CarlyFiorina leave this race. Smart, sane and classy. Hope she gets a good veep look.

Carly's 2016 legacy: A valuable conservative female voice who turned in two of the most commanding debate performances I've ever seen.


Fittingly, the former CEO waved farewell with a hard parting shot at the Left's constricting and self-serving vision of "feminism:"

To young girls and women across the country, I say: do not let others define you. Do not listen to anyone who says you have to vote a certain way or for a certain candidate because you’re a woman. That is not feminism. Feminism doesn’t shut down conversations or threaten women. It is not about ideology. It is not a weapon to wield against your political opponent. A feminist is a woman who lives the life she chooses and uses all her God-given gifts. And always remember that a leader is not born, but made. Choose leadership.


Hear, hear.  Mark Levin is right: Fiorina has been an extraordinary asset to the conservative cause this election cycle thanks to her relentless, ruthless criticism of Hillary Clinton.  She is bright, accomplished, disciplined, clever, and on-message.  And she's a fighter.  For those reasons alone, I agree with SE Cupp that she ought to get a serious look for a spot on the eventual GOP ticket -- especially because we know beyond a shadow of a doubt that Team Hillary is going to lean heavily on gender-based demagoguery against Republicans.  She's already deploying that cynical strategy against her far-left opponent who agrees with her on so-called "women's issues" like, er, taxpayer-funded late-term abortion-on-demand (most women are not on board with this extremism), and forcing nuns to facilitate the purchase of birth control in violation of their religious faith.  Regardless of what the future may hold, I suspect Fiorina's indelible legacy will be those two debates I tweeted about.  Her dominant showing in the first "undercard" debate in Cleveland was so complete that she guaranteed a spot at the adult table a few weeks later.  She fought her way in.  She earned it.  And then lightning struck twice.  She stole the show at the Reagan library, passionately and articulately advancing conservative ideals, and landing one of the only clear face-to-face blows against Donald Trump of the entire race thus far:


As an aside, Trump's nasty "look at that face" insult -- and his ham-fisted lie denying what he'd meant by it -- is precisely the sort of foolish, easily-exploitable episode that will sink him in a general election.  The overall electorate will not be remotely as forgiving of his intemperate antics, ignorance, and vulgarity as a certain segment of GOP and disaffected voters have been.  Even in light of Clinton's unpopularity and fundamental flaws, Trump cannot win.  I'll leave you with one of the most delightful moments of Carly Fiorina's entire campaign -- a comprehensive beat-down of Chris Matthews, delivered with a smile:


One more thing: Despite what the Left chants over and over again, Carly did not "lie" about the despicable contents of those undercover Planned Parenthood videos. How rich that liberals furiously accuse Fiorina of lying, while preparing to nominate this woman for the presidency.