Perhaps coincidentally, America's workforce participation rate is hovering around a four-decade low, and the national mood remains decidedly and historically sour after seven big years of Hopenchange. In all seriousness, the big story here is the continued rise of independents -- which speaks to a pervasive disaffection with the system that helps explain the unpredictable nature of the current presidential cycle. Voters who decline to align with either major party now represent a substantial plurality of the US electorate, and Gallup has never measured fewer self-described Democrats over 65 years of polling Americans: 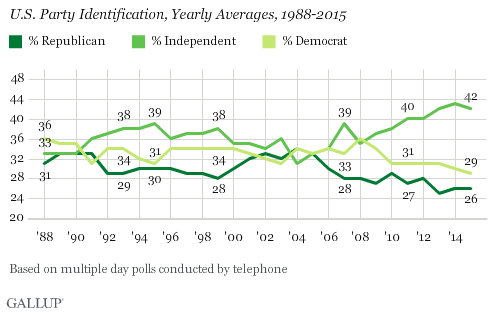 The percentage of U.S. adults identifying as Democrats is now at the lowest point in the past 27 years, down from the prior low of 30% in 2014. Gallup's shift from in-person to telephone interviewing in 1988 complicates the ability to directly compare party identification data collected between the two methods. However, Gallup data from 1951-1987 collected in person never found a yearly average Democratic identification less than 37%, making it safe to conclude that the current 29% is also the low point in Gallup polling history.


Even lower than 2014?  Refresh my memory: How'd that year go for the Democratic Party?  Before Republicans get too cocky, it's worth noting that Democrats still outnumber Republicans in raw percentages (as they almost always have), and when independents' leanings are factored in, Democrats maintain a slim advantage (45/42).  But that's far closer than at the zenith of Obamamania, when the GOP trailed on this question by a whopping 12 percentage points.  Fast forward several years, and the two most visible Democratic leaders are an ethically-challenged, unlikable liar, and a president who's presided over an unprecedented down-ballot decimation of his own party.  Barack Obama's unpopularity fueled two Republican midterm tidal waves, and continues to this day.  Consider these extraordinary data points from the latest Fox News poll.  This is what failure looks like:


On literally every single issue polled, a majority of American voters rate Obama's job performance as an overall failure.  This includes double-digit rejections on aspirational touchstones of Obama's original campaign (improving transparency, race relations and America's global image), hobby horse policy issues (healthcare, immigration), and pressing public anxieties (national security and ISIS).  Quite a feat.  And quite a new normal heading into Obama's final State of the Union Address, which the White House is promising will be "non-traditional," or something.  More words cannot and will not change this striking centerpiece of Obama's political legacy, as described in Politico last year:

The first signs of the slowly unfolding debacle that has meant the decimation of the Democratic Party nationally began early—with the special election of Scott Brown to Ted Kennedy’s empty Senate seat in Massachusetts. That early loss, even though the seat was won back eventually by Elizabeth Warren, presaged the 2010 midterms, which saw the loss of 63 House and six Senate seats. It was disaster that came as no surprise to the White House, but also proved a signal of what was to come. The party’s record over the past six years has made clear that when Barack Obama leaves office in January 2017 the Democratic Party will have ceded vast sections of the country to Republicans, and will be left with a weak bench of high-level elected officials. It is, in fact, so bleak a record that even if the Democrats hold the White House and retake the Senate in 2016, the party’s wounds will remain deep and enduring, threatening the enactment of anything like a “progressive” agenda across much of the nation and eliminating nearly a decade’s worth of rising stars who might help strengthen the party in elections ahead...Taken as a whole, these six years have been almost historically awful for Democrats. You have to go back to the Great Depression and the Watergate years to find so dramatic a reversal of fortunes for a party. And this time, there’s neither a Great Depression nor a criminal conspiracy in the White House to explain what has happened.


Since Barack Obama rode an anti-Bush wave into the White House in 2009, his party has lost nearly 1,000 legislative seats at the federal and state level. I'll leave you with this nasty nonsense from Democrats' hapless and ineffective (but still employed!) party chairwoman: