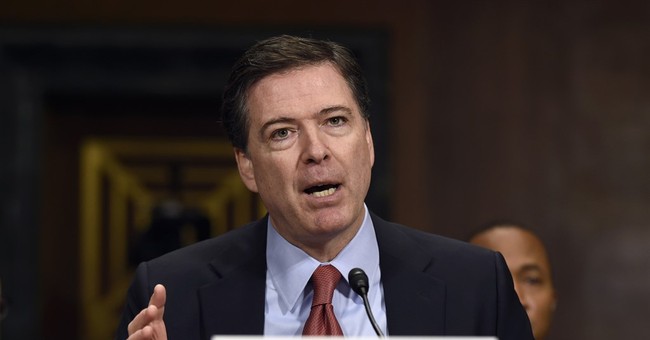 A quick update on the federal investigation into Hillary Clinton's improper, national security-compromising email scheme, via the FBI director:

FBI Director James Comey told the Senate Judiciary Committee Wednesday that the FBI would not let the White House interfere with the investigation into Hillary Clinton’s use of a private email server. “Anybody’s view about an investigation they’re not involved in is irrelevant,” Comey said, and promised that the White House would not influence the investigation. “We care about finding out what is true, and doing that in a competent, honest, and independent way,” he said. “I promise you that’s the way we conduct ourselves.” “As I’ve said many times, we don’t give a rip about politics,” Comey said.


This probe is serious and has expanded in scope. Comey likely felt compelled to affirm that political considerations will not infect his bureau's work because the nation's chief executive, to whom the Attorney General reports, decided to weigh in on Clinton's legal culpability amid the ongoing investigation. Speaking of which, is this an escalation?


If the FBI has access to the "complete" email tranche provided by Hillary to the State Department, as well as her private server (from which they've reportedly recovered messages her team attempted to unilaterally delete), they may be able to determine how many work-related emails she tried to destroy -- a separate issue from the 'gross negligence' of classified materials angle. She claimed she only deleted personal emails, but that has been exposed as a lie, several times over. I discussed Comey's remarks on Fox News earlier, courtesy of Right Sightings:


A substantial majority of American voters view Mrs. Clinton as dishonest and untrustworthy, both on this specific issue and in general.  Relatedly, the presumptive Democratic nominee recently contradicted the explicit recollection of four separate Benghazi family members regarding what she told them at a private meeting in the days following that deadly terrorist attack.