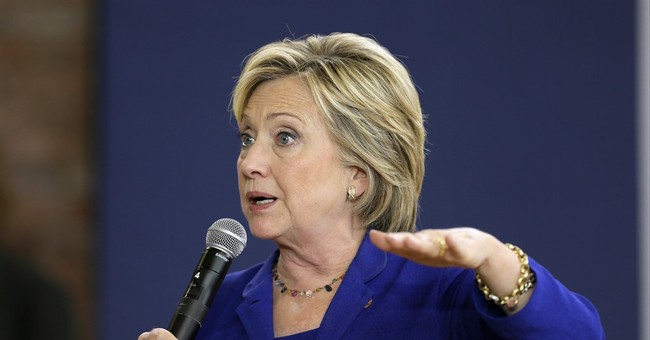 Fox News is reporting that the Federal Bureau of Investigation's probe into Hillary Clinton's improper email scheme is exploring whether the arrangement resulted in violations of the Espionage Act:

Three months after Hillary Clinton’s use of a private email address and server while secretary of state was referred to the FBI, an intelligence source familiar with the investigation tells Fox News that the team is now focused on whether there were violations of an Espionage Act subsection pertaining to "gross negligence" in the safekeeping of national defense information. Under 18 USC 793 subsection F, the information does not have to be classified to count as a violation. The intelligence source, who spoke on the condition of anonymity citing the sensitivity of the ongoing probe, said the subsection requires the "lawful possession" of national defense information by a security clearance holder who "through gross negligence," such as the use of an unsecure computer network, permits the material to be removed or abstracted from its proper, secure location. Subsection F also requires the clearance holder "to make prompt report of such loss, theft, abstraction, or destruction to his superior officer. "A failure to do so "shall be fined under this title or imprisoned not more than ten years, or both."


Fines and imprisonment. Independent of where this investigation ends up, the notion that it's not criminal in nature -- a favored Clinton talking point -- is desperate, straw-grasping spin. There's another angle being pursued as well, according to sources:

The source said investigators are also focused on possible obstruction of justice. "If someone knows there is an ongoing investigation and takes action to impede an investigation, for example destruction of documents or threatening of witnesses, that could be a separate charge but still remain under a single case," the source said. Currently, the ongoing investigation is led by the Washington Field Office of the FBI. A former FBI agent, who is not involved in the case, said the inconsistent release of emails, with new documents coming to light from outside accounts, such as that of adviser Sidney Blumenthal, could constitute obstruction. In addition, Clinton’s March statement that there was no classified material on her private server has proven false, after more than 400 emails containing classified information were documented.


As Katie wrote this morning, incensed FBI officials have flagged down the New York Times to air their grievances about President Obama's politicized, public rush to judgment regarding the implications of Mrs. Clinton's conduct:

[Obama's] statements angered F.B.I. agents who have been working for months to determine whether Ms. Clinton’s email setup had in fact put any of the nation’s secrets at risk, according to current and former law enforcement officials. Investigators have not reached any conclusions about whether the information on the server had been compromised or whether to recommend charges, according to the law enforcement officials. But to investigators, it sounded as if Mr. Obama had already decided the answers to their questions and cleared anyone involved of wrongdoing...A spokesman for the F.B.I. declined to comment. But Ron Hosko, a former senior F.B.I. official who retired in 2014 and is now the president of the Law Enforcement Legal Defense Fund, said it was inappropriate for the president to “suggest what side of the investigation he is on” when the F.B.I. is still investigating. “Injecting politics into what is supposed to be a fact-finding inquiry leaves a foul taste in the F.B.I.’s mouth and makes them fear that no matter what they find, the Justice Department will take the president’s signal and not bring a case,” said Mr. Hosko, who maintains close contact with current agents.


I'll leave you with this headline, which drips with irony:


Yes, because Hillary Clinton is famously passionate about protocols and safeguarding sensitive information, right? Also, if Hillary is concerned about selective, politics-driven leaks from the Benghazi committee, she should probably have a stern talk with ranking Democrat Elijah Cummings.