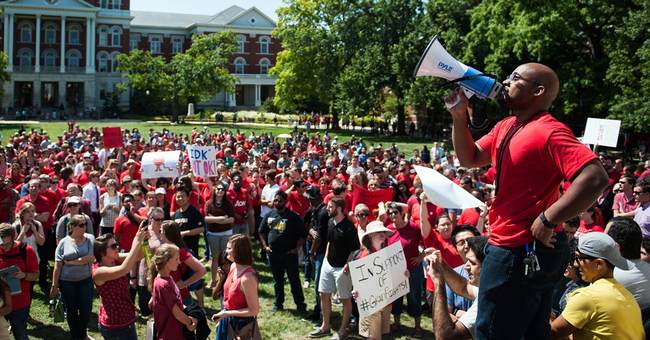 There's a reason why Mary Katharine Ham and I devoted a full, lengthy chapter of End of Discussion to examining and decrying the toxic culture of weaponized political correctness that is strangling free expression and critical thinking on many of America's college campuses. These supposed institutions of higher learning are being reduced to petri-dishes of grievance-mongering over "microaggressions," "triggering," and "privilege," the point of which is to silence and punish dissenters; allegedly aggrieved bullies seek to destroy people's lives and enforce their radical orthodoxy while cynically claiming the mantle of victimhood. Others have documented the recent stomach-turning spectacles at Yale and the University of Missouri, where professors and administrators' livelihoods are threatened and eliminated by the capricious whims of a wildly intolerant, anti-intellectual, freedom-disdaining mob. Their termination-worthy infractions? Inadequate prostration before students' concerns about so-called institutional racism -- or "systematic oppression," as one uniquely reckless student leader at Mizzou referred to the problem. That young, gay, black man has been so systematically oppressed, we should mention, that his peers elected him student body president.  Alarmingly, this mindless contagion is spreading, as students at other universities experience Outrage Envy and cast about for meaning in their lives via destructive agitation.  Christine covered the decision by the University of Minnesota's student congress to reject a 9/11 commemoration resolution because opponents argued that it might stoke "safe space"-puncturing "Islamophobia."  The thousands of innocents murdered by Islamist terrorists that day could not be reached for comment on the value of safe spaces.  In California, the Dean of Students at Claremont McKenna has resigned.  Why?  You tell me:

Prior to the protest’s start, CMC junior Taylor Lemmons ’17 announced in a post on Medium that in protest of the lack of support she believes DOS has shown towards students of color and of other marginalized identities, she is undergoing a hunger strike until Dean Spellman resigns from her post. Additionally, Resident Assistant Milly Fotso ’16, who works under Spellman in the Dean of Students office, wrote in a public Facebook post following the protest calling for her resignation...In an email from President Chodosh sent to students before the protest, Chodosh committed that the college will move forward with hiring two new positions, one under the umbrella of student affairs and one under the Dean of Faculty and academics, to support diversity and inclusion on campus. With the support of these two new positions, he added, the College has “authorized the creation of a new programming space to support campus climate (identity, diversity, and free speech)” which “will be dedicated to collaborative, educational work by students, professional staff, and other experts on diversity, identity, civil rights, and free speech issues on our campus.” ... One of the primary demands articulated in the open letter (released earlier today) from CMCers of Color, SAGA, APAM, BSA, and GenU was the creation of a resource center on campus for students of marginalized identities. At the demonstration, President Chodosh publicly committed to providing a temporary space for a resource center in the interim period while they work on establishing a permanent center.


The sniveling administrators pledged to hire two new facilitators of "diversity and inclusion," and to establish a resource center for "students of marginalized identities."  Not good enough, the mob of blindly enraged special snowflakes cried, and the Dean of Students was sent packing.  One commenter on the resignation story offered an alternative headline: "Snowflakes bag jellyfish."  Indeed.  Notice that there isn't even a specific allegation (click through for more details) of bona fide racism here, just a hunger strike and protest over a perceived "lack of support shown towards students of color and other marginalized identities."  Meanwhile, at Ithaca College in New York, students are demanding the president's resignation over some deeply problematic "racially-tinged" incidents that apparently require his ouster -- once again for the unprovable thought crime of insufficient caring, or whatever:

The president of the school in Ithaca, N.Y., is in the hot seat thanks to what some students say are inadequate responses to several allegedly racist incidents on campus and an overall negative racial climate. The incidents range from reportedly offensive remarks made by Public Safety officers at RA training sessions as well as by two Ithaca alumni at a campus event, to a racially tinged party invite from a fraternity. Now, an email has been sent out by the Ithaca Student Government Association (SGA) asking for a vote of “confidence” or “no confidence” in Rochon, with votes due Nov. 30. “You should care about … creating an inclusive environment,” says senior and Student Government Administration (SGA) president Dom Recckio. Students “aren’t confident in President Rochon.”


And what were these "allegedly racist incidents on campus," pray tell?  Steel yourself, dear reader:

The first alleged instances happened at two RA training sessions in August, according to RAs in attendance and an article in student publication The Ithacan. The two officers, ID’d in the article as Sergeant Terry O’Pray and Master Patrol Officer Jon Elmore, supposedly dismissed concerns about racial profiling, “saying that it does not happen at Ithaca College” and then showed a BB gun, according to RA Rita Bunatal, with one officer saying, “‘If I saw someone with this I would shoot them.’” ... Another controversial incident occurred at the college’s Blue Sky Reimagining event Oct. 8 that asked students to help “formulate ideas about the evolution of Ithaca College.” During the event, two Ithaca alumni carelessly and offensively referred to Tatiana Sy, a panelist and woman of color, as a “savage” after she said she had a “savage hunger” to succeed. The third instance occurred when an unaffiliated Jewish fraternity, Alpha Epsilon Pi, posted an invite on Facebook post for a “Preps & Crooks”-themed party in October. According to the post, “Prep” attire was described as a “Polo shirt, button-down, backwards baseball cap, khakis or boat shoes” whereas “Crooks” attire was described as a “bandanna, baggy sweats and a t-shirt, snapback, and any ‘bling.’


Incident one: Police officers denied that they racially profile and warned that wielding a BB gun could get someone shot.  Incident two: Two alumni "carelessly and offensively"" referred to a black student as "savage," echoing the word she used at the forum to describe her own passion to succeed. The video shows two older white men flippantly using "savage" as shorthand for the woman, obviously based on her use of the word. This formulation was ill-advised and very awkward, but the context and tone of the conversation made clear that they were not employing the term in a malicious or derogatory way. It seemed as though they were totally oblivious to the potential racial subtext, even though the young woman was squirming. Incident three: A frat planned to throw a themed party in which "crooks" were encouraged to wear "baggy sweats and bling." When students objected to that description's racial overtones (which they inferred, mind you), the party was canceled.  When the school's embattled president hosted a discussion to hash out students' worries, activists from 'People of Color at Ithaca College' interrupted the event and "took over the stage," before leading a mass walk-out.  The administration also vowed to hire a 'Chief Diversity Officer,' which did exactly nothing to sate students' emotion-driven, scalp-claiming appetite.  We'll see if the snowflakes bag another jellyfish.  I'll leave you with three clips.  The first is my appearance on Fox & Friends this week discussing the fracases at Yale and Mizzou.  The second is South Park's brilliant skewering of "safe space" obsessives, who actively demand the abolishment of reality (content warning). Finally, please enjoy some sharp analysis from one of America's Future Thought Leaders, whose economic illiteracy and acute allergy to facts is well and truly beyond parody:


"It seems like we're churning out a generation of young people at the elite level who feel like their feelings are paramount...this comes back to this Orwellian term, the 'safe space'...of course we believe that college students have a right to be physically safe.  They do not have a right to be protected and shielded from ideas, or thoughts, or images that might make them feel uncomfortable."


UPDATE - Surreal. These coddled, self-righteous enemies of liberty must be resisted and mocked at every turn:

Finally: if foolish enough to think "All Lives Matter" or "Free Speech" are acceptable ideas, REPORT FOR REEDUCATION pic.twitter.com/3kEvghwKbi