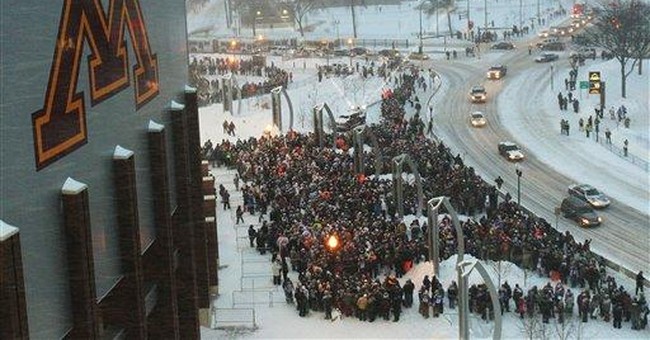 Here's another instance of political correctness on a college campus going a smidge too far, courtesy of the University of Minnesota-Twin Cities: A proposed resolution to recognize the 9/11 terrorist attacks on campus each year was rejected by the Minnesota Student Association as it may potentially violate a "safe space" on campus.

“This resolution was non-controversial and was supported by the MSA’s President and Vice-President,” said Amundson, “However, several members, in exchanges with CRs rep Theo Menon, were militant in their opposition to it due to a perceived bias toward Muslims.”

Other proponents of the resolution argued in forum that its passage could bring up controversial topics, and that a healthy dialogue and campus tension reduction would ensue from the moment of recognition.

At-large MSA representative and Director of Diversity and Inclusion David Algadi voiced severe criticism of the resolution. He also made sure to emphasize 9/11’s status as a national tragedy in his response.

“The passing of this resolution might make a space that is unsafe for students on campus even more unsafe,” said Algadi, “Islamophobia and racism fueled through that are alive and well.”

Algadi added that holding a moment of recognition over a tragedy committed by non-white perpetrators could increase racist attitudes on campus, asking, “When will we start having moments of silence for all of the times white folks have done something terrible?”

Welcome to college in 2015, where it's somehow problematic to acknowledge and remember victims of a terrorist attack. (While many schools participate in some form of the Young America's Foundation's 9/11: Never Forget Project, there were no such memorials on the U's campus.)

To play devil's advocate, today's entering freshmen class was born in 1997 and likely doesn't remember the September 11 attacks. Still, this doesn't excuse the rejection of a resolution to remember the day that nearly 3,000 innocent people were murdered. It is not Islamophobic or racist to pause and reflect on a day that fundamentally changed the country. If 3,000 people were killed in attack committed by white militant Presbyterians (or some other denomination), there would still be nationwide shock, outrage, sadness, and remembrance on the anniversary of the date. The victims of 9/11 aren't remembered because they were killed by Muslims--they are remembered because they were killed by terrorists, who happened to be Muslim.

As college students get older, fewer and fewer of them will have been old enough to remember the attacks. This is why it's more important than ever to establish some kind of annual memorial or remembrance ceremony.