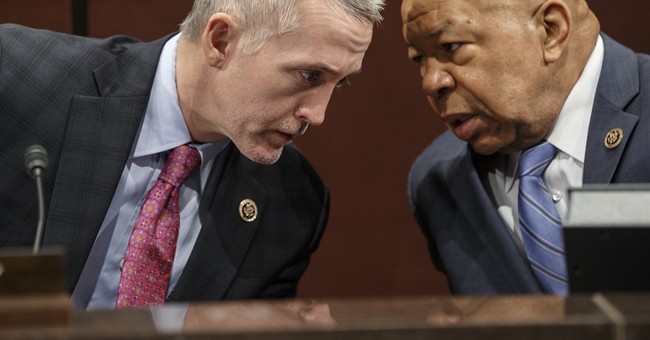 This story was more or less lost in the noise of yesterday's palace intrigue, but it's too important to simply let lie.  Do yourself a favor and click through to Gowdy's letter before proceeding any further. Read the entire thing. It's extraordinary, on several levels: First, Gowdy summons his prosecutorial vigor to absolutely demolish the ranking Democrat on the House Select Committee on Benghazi.  Democrats have seized upon erstwhile Speaker-in-waiting Kevin McCarthy's ill-advised comments to try to shut down the panel's probe -- a continuation of their ongoing, partisan efforts to dismiss its focus as a "phony scandal" and to portray the investigation as a political witch hunt.  Gowdy has been unsparing in his rejection of McCarthy's since-abandoned characterization and unflagging in his defense of the committee's work.  In response to Democrat Elijah Cummings' endless attacks and accusations, the South Carolina Republican drops the hammer: 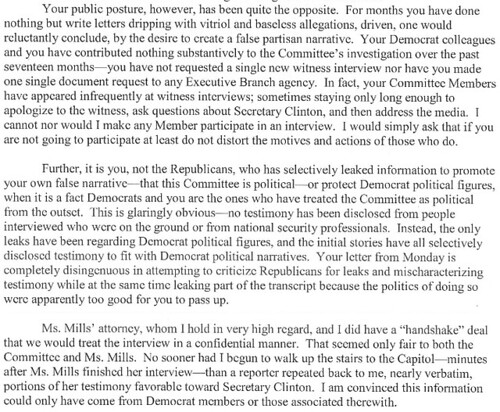 Cummings, Gowdy continues, has been acting on duties "not to the American public, but to your Democrat colleagues and to the administration, including former Secretary Clinton," adding that he's disappointed in the Democrat's "complete lack of interest in gathering any facts."  Again, read the whole thing. The letter goes on to ridicule Cummings for objecting to the release of some Clinton emails, noting that both Mrs. Clinton and Cummings himself have stated that all of the messages should be made public: "Only in Washington, DC can both the author of the emails and the ranking member of a committee call for the disclosure of all relevant emails and then complain that all relevant emails were disclosed."  To put a finer point on it, Gowdy announces his intention to release another tranche of Hillary's emails pertaining to Benghazi and Libya.  Several excerpts call into question the impartiality of the State Department's internal "Accountability Review Board" Benghazi investigation, but the biggest revelations expose the former Secretary of State's correspondence with Sidney Blumenthal.  Mr. Blumenthal, you may recall, is a Clinton confidante whose ethical reputation is so suspect that the Obama administration barred Hillary from hiring him at State.  But that didn't stop Hillary from relying on Blumenthal as an off-the-books purveyor of unvetted intelligence.  The New York Times reported several months ago that Blumenthal's ongoing relationship with Sec. Clinton was highly unusual: He was on the payroll of the Clinton Foundation while feeding Hillary private intel, which was frequently colored by his own separate financial interests.  The new batch of emails contains startling new details, summarized by the Weekly Standard's Stephen Hayes:

More from #Benghazi Cmte: HRC was not only soliciting info from Blumenthal, contrary to her claims, she was promoting his business interests

In one unsecure email from Blumenthal to Clinton, he appears to name a top CIA source in Libya. (Committee redacted this info). #Benghazi


Here's the relevant passage on the CIA asset:

They exchanged extremely sensitive material between two unsecure servers. Remember, one of the reasons we know that Hillary Clinton did not hand over all work-related emails as claimed is that Blumenthal's emails were hacked.  Mrs. Clinton downplayed her relationship with Blumenthal after the Times story was published, stating that his messages were "unsolicited."  These emails blow all of that out of the water.  Hayes writes, "In a statement accompanying the letter, Gowdy makes some of his strongest accusations to date about the Obama administration's obstruction of the committee's work. 'These messages should have been made public when the State Department released Secretary Clinton’s other self-selected records on Libya and Benghazi, but there was a clear decision at the time to withhold this information from the American people and the Committee.'"  Gowdy alerts Cummings that the committee "plans on releasing these new emails" next week and plans on questioning Mrs. Clinton about their contents on October 22.  Stay tuned.