FIGHT NIGHT: All Eyes on Trump in Round One

CLEVELAND, OHIO -- There have been exploratory committees, social media skirmishes, candidate forums, town hall events, announcement speeches, media analyses, and a seemingly bottomless supply of polls. But the race for the 2016 Republican presidential nomination begins in earnest tonight at 9pm ET on Fox News Channel.  Based on a formula derived from national polling, Fox selected the top ten GOP contenders who will square off in the first official debate of the cycle, moderated by Bret Baier, Megyn Kelly and Chris Wallace.  The network will also televise an earlier exchange among the seven Republican candidates who didn't make the primetime cut.  Dan previews that "undercard debate" here, while Byron York argues that it may end up being the more substantive and interesting forum of the evening. Make no mistake, however: The nightcap is the main event.  The stage is literally set, and this is how the candidates will be positioned, based on their standing in the polls: 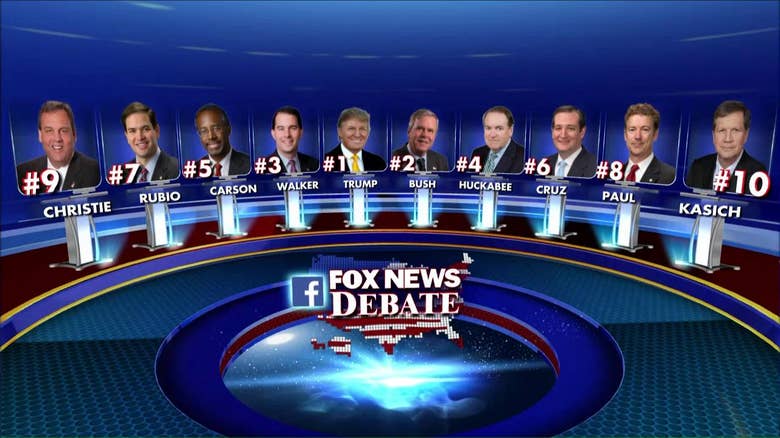 Smack dab in the middle of it all -- figuratively and literally -- stands Donald Trump, the celebrity billionaire and real estate mogul who's stormed into the early lead, establishing himself as the frontrunner in every single national survey published since early July.  Trump is the must-see 'X-factor' in tonight's festivities; like it or not, he's the center of attention and the subject of more political buzz than any of his opponents.  One suspects that the tune-in factor tonight will be substantial -- not just because it's the first debate among a talented field in a consequential presidential primary cycle, but because committed politicos and casual viewers alike are likely wondering the same thing: How is Trump going to comport himself?  And how will the other candidates interact with him?  Trump's rivals are faced with an intriguing menu of tactical options on this front:  First, they can try to more or less ignore him, focusing instead on delivering their core messages to a vast audience.  Second, they could go negative, seeking to expose Trump's policy incoherence and very liberal record (just this week, Trump channeled Harry Reid by bashing the Koch brothers and announcing his opposition to the pro-free speech Citizens United Supreme Court ruling). Third, they could gamely press ahead, acknowledging Trump's larger-than-life persona, but treating him politely and relatively seriously.

The attractiveness and viability of these options may depend on the tenor of the evening -- and whether Trump abides by his indication that he intends to play nice.  But some combination of doors one and three seems like the smartest bet for many of the candidates on stage.  Focus on your message.  Introduce yourself to voters.  Don't poke the loose cannon.  It didn't work for Rick Perry, plus it's probably premature to go for the kill against a man whose poor command of the issues and virtually non-existent filter place him on the perpetual brink of implosion.  Given that Trump's popularity is in many ways a giant middle finger directed at the country's political class, an anti-Trump pile-on by politicians would only serve to feed his narrative and fuel his supporters' intensity. Then again, if tonight becomes the Donald Trump Show, there are candidates who stand to lose more than others.  Team Jeb is delighted at the reality star's campaign, which was reportedly encouraged by none other than Bill Clinton. Trump is depriving more serious conservative players of much-needed political oxygen and opportunities to distinguish themselves, and that's just fine with Jeb.  A fractured conservative base and a frightened donor class redound to Bush's benefit -- though one wonders if even major donors have been spooked by recent missteps.  Guys like Ted Cruz and Ben Carson are depending on the support of the anti-establishment, grassroots base to chart a path to the nomination.  At some point, Trump becomes an existential threat to their candidacies.  Do they hang back and avoid alienating Trump's fans with attacks?  Or do they make a blunt and direct play at that very audience, making an aggressive case for why they -- and not the ideologically shape-shifting Trump -- best represent that cohort?  Meanwhile, the Washington Post does a reasonably good job of anticipating the topics that are likely to arise this evening, ranging from current hot buttons like the Iran Deal, the Planned Parenthood scandal, ISIS, and religious liberties to more longstanding fodder like immigration and Obamacare.  Politico is out with a good piece profiling tonight's moderators, featuring some enjoyable insights and quotes:

For the past several weeks, Fox News hosts Bret Baier, Megyn Kelly and Chris Wallace have been holding debate meetings. “Cram sessions,” as Baier calls them. They arrive with questions, then tweak them, work them, refine them, until they’re cleaner, sharper, more precise. The pressure is immense: Both Baier and Wallace said they’ve woken up in the middle of the night thinking about how to better frame their questions. Kelly said that while she never gets nervous on television anymore, “this is the one event where, for me personally, your heart is pumping and there is a nerve factor.” … “There are no wallflowers in the group,” Wallace said of the trio. “The reason all three of us were chosen is that we’re three of the toughest, hardest hitting interviewers in the business.”


As we await the bright lights inside Quicken Loans Arena, questions abound:  Does Scott Walker have another breakout performance in him, or is he happy to chug along as a top tier candidate?  Will Marco Rubio's telegenic appeal and communications skills help him reverse his post-announcement-bounce polling fade?  Can Rand Paul shake off his campaign tumult and pound home a libertarian-leaning message, perhaps tangling with his more hawkish counterparts on national security issues?  As the final entrant into the race who barely squeezed onto the big stage, will John Kasich distinguish himself from the pack in his home state?  Can Chris Christie remind conservative voters of why they used to like him?  And, oh yeah: What the heck is Donald Trump going to do?  I'll leave you with this fun video from IJR running through the candidates' pre-debate rituals and routines: