Some lefties are crowing about a new poll showing public support for Obamacare ticking up above water (barely) at 43/42.  This has touched off another round of "winning streak!" and "it's working!" high-fiving. A few points: (1) The Kaiser survey's result is an outlier. The national average of polls, aggregated by RealClearPolitics, still shows disapproval outpacing approval of the law by about ten points. Yes, this gap is less pronounced than the worst days of the roll-out debacle (Obamacare has by and large faded from headlines recently, which probably helps it), but overall public opposition has been remarkably consistent: 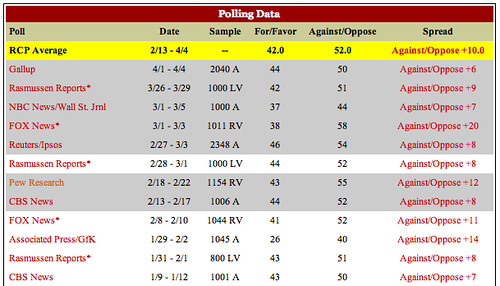 (2) It's worth remembering that Obamacare fans had another triumphant moment over a Washington Post/ABC News poll last year. It turned out to be a blip, not a trend.

(3) Even in these Obamacare-favorable numbers from Kaiser, more respondents say they've been directly harmed by the law than directly helped.  This gap is smaller than we've seen in other polling -- unsurprising, given the apparent outlier status of this survey -- but it's still there.  The majority of Americans say they haven't been personally impacted by Obamacare…yet…although that group probably includes many people like me whose healthcare arrangements have remained basically the same for now, but with higher costs.

(4) The latest out of California:


Inept and transparent. Click through for additional quotes from Covered California whistleblowers, describing the dysfunction. Obamacare: It's not "proving its critics wrong," it's not fulfilling its promises, and it's not popular.