Video: No, the Obamacare Debate is Not "Over" 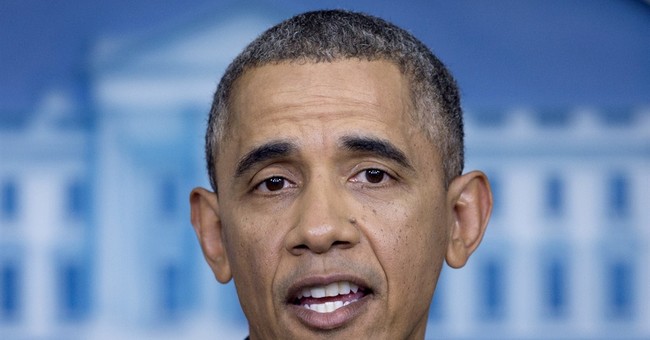 Try as they might, President Obama and his media allies cannot tell Americans how to think. On two recent occasions, Obama has attempted to proclaim an end to the national conversation over his unpopular health law. Polling continues to show that most Americans disapprove of the law -- with a sizable plurality favoring complete repeal, and a majority backing major changes. With a nod to Animal House's Bluto, I explained on Fox News why Obama's unseemly attempts to stifle and delegitimize debate won't work (via Right Sightings' Steven Laboe):


In a football-spiking story that could have been written by the White House press team, National Journal's Lucia Graves -- supposedly a news correspondent -- gleefully declares that all of Obamacare's "good news" is, in fact, bad news for "conservative pundits." She proudly touts a colleague's column about the law's "winning streak," arguing that we've been "hyperbolic" in overselling the negative impacts of the law. Setting aside the irony of an Obamacare supporter chastising others for overselling anything, Graves' evidence of conservative hyperbole are (a) the law's strong enrollment numbers, and (b) a USA Today report indicating that 2015 premium spikes may be less dramatic than expected. Let's examine each:


Enrollment: Eight million "sign-ups" is undoubtedly better than most people expected, but as we've explained, once non-payments are factored in, the actual enrollment figure is likely closer to 6.4 million -- quite a bit shy of the administration's goal. More importantly, the White House still won't say what percentage of these people previously lacked coverage, which is the best indicator of whether the law is truly "working," as the president constantly avers. Independent studies have concluded that the large majority of these "new" enrollees already had insurance before Obamacare. Based on the available data, it's entirely possible that the previously-uninunsured population that obtained coverage through the new exchanges amounts to between 1.6 and 2.1 million. "Success." Also, in spite of the president's misleading statistics about "under 35" enrollments, just 28 percent of exchange sign-ups came from the crucial 18-34 "young invincibles" demographic. The White House was hoping for closer to 40 percent; a significant miss. This all passes as "good news" for people who are desperate to nourish a political narrative.


Premiums: As for the possibility of lower-than-expected premium increases, Graves says most righties' predictions of sharp premium jumps were based on a "thinly sourced" article in The Hill, which we wrote about here. But that wasn't our only source -- not by a long shot. In February, Reuters quoted insurance executives predicting "double digit" rate shock in "many states" next year. The news agency followed up earlier this month with a piece describing how insurers are bracing for a "backlash" over rising costs. Bloomberg has followed the trend, too, with a Morgan Stanley analysis pointing to significant hikes for many Americans in the small group market. The Associated Press published a piece a few weeks ago about how rural Americans, in particular, are in for a rough ride. And we haven't even mentioned unaffordable "out-of-pocket" costs, or the impacts of so-called access shock, as people discover that their preferred doctors and hospitals are no longer in network. Nor have we addressed the upcoming waves of cancellation notices, which will materialize over the coming months and years. But since she is so giddy about it, let's take a peek at the analysis Graves trumpets as such fantastic news for Obamacare:


Axene says that as insurers dig through the new health exchange enrollees to figure out their ages and health conditions to determine next year's premiums, he expects an overall increase of 6% to 8.5%...Axene warns there could be wide variations in actual costs. "In some states, there's a very wide spread between the high rate and the low rate — in Manhattan, it was 2-to-1 — but these are averages," he says. He's also been able to get an early read on some of the people who have been enrolling, though the March and early-April exchange enrollees' data aren't yet available. The early enrollees tended to be people with "higher morbidity," he says — about 6-8% had higher-than-average health care needs. But that had been expected, and probably won't play a large part in next year's premiums. However, insurance costs are likely to rise more in coming years as reinsurance and risk corridors disappear in 2017.


State-to-state rate increases will be highly variable, and premiums could really head north once measures that use taxpayer dollars to mitigate insurers' losses phase out. Furthermore, Mr. Axene -- who is the primary source for this piece touted 'round the lefty blogosphere -- says that he hopes Obamacare "bending the cost curve down" will negate this trend. The law is not bending the cost curve down, and the recent (Obamacare-unrelated) slowdown in rising health costs may be over. Finally, because we're being lectured about expectations management, let's recall that the president repeatedly promised that health costs would decrease substantially as a result of his $2 trillion law. The average family, he said, would save $2,500. Nancy Pelosi intoned that "everybody will have lower rates." Now Obamacare backers are pounding their chests over one man's opinion that average premium increases may -- may -- "only" be seven percent for some Americans. How many single mothers will receive their higher health bills and exclaim, Wow! My rates only increased by seven percent this year -- what a huge success! Those pundits sure missed the boat! (Perhaps Democrats can take this uplifting message on the trail with them in the fall). The more likely scenario involves middle class families -- many of whom are already worrying about keeping their doctors and budgeting for higher deductibles -- eyeballing the new prices and reacting thusly: What the hell? Our premiums are going up again? Weren't we told the new law was going to reverse the endless upward climb? Why, yes. Yes you were. Here's your "winning streak," America: