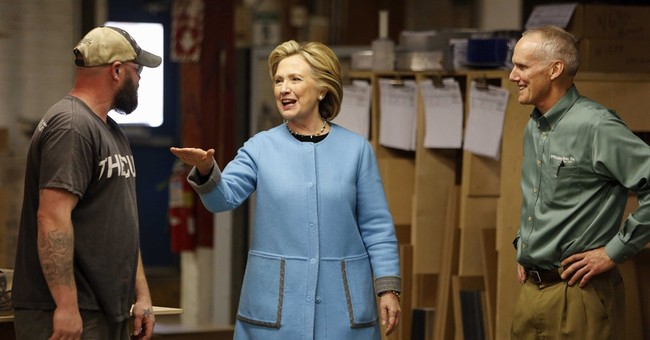 Team Hillary is reacting predictably to news reports about the forthcoming book, "Clinton Cash," which purports to connect the dots on the Clintons' unethical, multimillion-dollar favor bank -- which was awash in unvetted foreign cash. Her Majesty's protectors are doing their thing, savaging the messenger as a right-wing hatchet man, and risibly shrugging off the yet-unveiled revelations as "old news," "conspiracies" and "distractions." I discussed these developments on today's edition of Outnumbered:


As I caution in the clip, it remains to be seen whether the author's work truly has "the goods" on explicit malfeasance, or if the book will simply add some new particles to the ethical cloud.  We'll find out soon enough, but here are two worrying indicators for the Clinton campaign, via the New York Times:

The book, a copy of which was obtained by The New York Times, asserts that foreign entities who made payments to the Clinton Foundation and to Mr. Clinton through high speaking fees received favors from Mrs. Clinton’s State Department in return. “We will see a pattern of financial transactions involving the Clintons that occurred contemporaneous with favorable U.S. policy decisions benefiting those providing the funds,” Mr. Schweizer writes...“Clinton Cash” is potentially more unsettling, both because of its focused reporting and because major news organizations including The Times, The Washington Post and Fox News have exclusive agreements with the author to pursue the story lines found in the book...He writes mainly in the voice of a neutral journalist and meticulously documents his sources, including tax records and government documents, while leaving little doubt about his view of the Clintons.


I'm also eager to hear the candidate herself explain why the tens of thousands of deleted emails from a since-destroyed secret, oversight-free, under-secured email server qualifies a "conspiracy."  Or how the word "distraction" could remotely apply to America's top diplomat being enriched via huge, unexamined contributions from foreign governments (and individuals) while she's actively shaping US foreign policy.  Perhaps we'll get some answers just as soon as she's through huffing and puffing about "toppling" the very rich (exceptions apply!), in an embarrassingly ham-fisted sop to her party's Warrenesque base.  I'll go a step farther than Allahpundit -- I think it's highly likely that her own campaign leaked that quote, eager to satiate the Left's rapacious appetite for class warfare.  Wall Street doesn't believe a word of it, of course, because they know a gal's gotta say what she must in order to fend off any possible primary challenge. You do "you," Hillary.  We'll be waiting to fill those enormous coffers when the time comes. Fun: