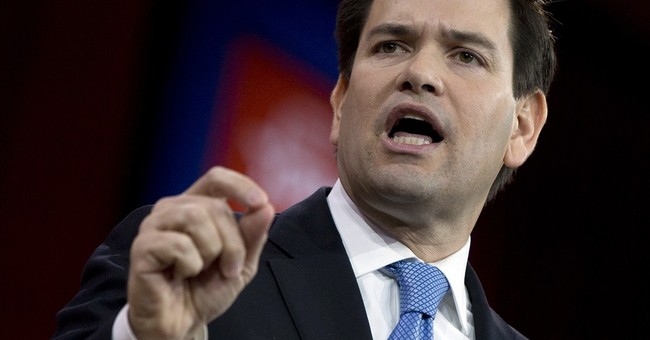 A no-brainer on politics and substance alike. President Obama's rumored deal (which got worse today) with Iran's terroristic regime is causing bipartisan heartburn on Capitol Hill, is worrying even typically skittish allies, is viewed as unacceptable across the board in Israel (and certain Arab capitals), and isn't likely to find a receptive audience among American voters. Leaked details reveal that Iran's nuclear program will gain international legitimacy under the bargain, which keeps the country's nuclear infrastructure in place, as well as 6,000 centrifuges spinning. It demands nothing of Iran on its illegal missile program, its sponsorship of terrorism and outsourcing of chaos in the region, or its abysmal human rights record. It reopens the money spigot to pump money back into Iran's economy, which has been battered by sanctions (the primary reason they're at the negotiating table in the first place). And its restrictions begin to phase out after ten years, regardless of Tehran's behavior. Also, Iran's team is now insisting on more immediate sanctions relief, before they've demonstrated any meaningful or lasting compliance. In return, the West gets the world's leading exporter of terror to essentially press the "pause" button on their rogue nuclear weapons program, and the mullahs might agree to so-called "snap" inspections, which they're currently calling "illegal."  Of course, Iran agreed to those intrusive inspections after the US invasion of Iraq, then reneged a few years later and forged ahead in hot pursuit of nukes.  First up, Marco Rubio -- last heard from mounting a stirring defense of Israel on the Senate floor -- chatting with Hugh Hewitt:


Rubio says that as president, he'd "absolutely" vitiate any agreement Obama strikes with Tehran without Congressional approval. Allahpundit wonders if geopolitical realities would allow the next president to just summarily flush the deal down the toilet, which goes to the heart of Obama's myriad executive power grabs: Take actions that may not have the binding force of law beyond January 20, 2017, but that would be politically difficult to roll back. What a President Rubio could do here is urge Congress to pass a brutal battery of sanctions that would be triggered by any amount of Iranian cheating, "accidental" or otherwise. He could also seek to expand the terms of the deal to shut down Tehran's long-range missile program, then use their furious objections as a very good excuse to walk away and lower the sanctions boom. Here's Scott Walker, also with Hewitt, torching the reported deal:


Questions for Hillary: Does she support the reputed terms of Obama's deal with Iran, in full?  Does she believe Iran deserves to keep its nuclear infrastructure in place, and that Western restrictions should begin to sunset after a decade?  Does Iran's ICBM program have any legitimate purpose, and if not, should it be permitted to exist under any US deal?  Does she agree with the White House that Yemen is still an American foreign policy "success" -- even as Iran-backed rebels have overthrown the government (hello there, Iran), ISIS is bombing mosques, Al Qaeda is seizing cities, American special forces are being evacuated, and US intelligence is being compromised?  It would be instructive to hear her answers on these, and many other, topics.  Alas, her appearance before a room full of journalists this week featured jokes about her insecure secret email server and destruction of official emails, but no questions: