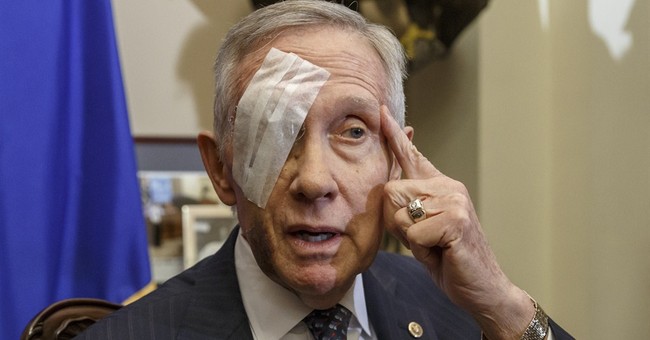 For weeks, Harry Reid and his Senate Democratic minority -- with the explicit blessing of the White House -- have been blocking all debate on a House-passed bill to fund the Department of Homeland Security. The House legislation provides full appropriations for DHS, with the small exception of stripping out funds targeted for the implementation President Obama's unpopular and illegal (according to both a federal judge and Obama himself) executive amnesty fiat. Democrats in the upper chamber had already filibustered three attempts to take up, discuss, or amend the House's bill. Last night witnessed round four. Kudos to CNN for its accurate headline -- "Senate Dems Block Homeland Security Funding Bill Again:"

The Republican-led Senate voted Monday -- for the fourth time in as many weeks -- to begin debate on a stalled funding bill for the Department of Homeland Security, which faces a Friday deadline. But like the three votes before it, Senate Democrats blocked taking up the bill that passed the GOP-controlled House because it contains what they consider poison pills -- provisions that would block President Barack Obama's executive orders on immigration. On a measure that needed 60 vote to succeed, it failed with 47 voting in support to 46 against. With only four days before DHS funding ends -- when large parts of the agency will be shuttered or employees will be forced to work without pay -- the two sides are at a stalemate and there are no known serious negotiations involving congressional leaders or the White House to bridge differences. "It's time to allow this Homeland Security funding legislation to come to the floor," a visibly frustrated Senate Majority Leader Mitch McConnell said before the vote." Democrats say they want to amend DHS funding legislation. But then they keep voting to block their own amendments. It just doesn't' make any sense."


Democrats say they're objecting to discussing the bill because it contains "poison pills."  Debates and amendments could alter or eliminate some of the items they object to, but they won't even allow that debate to begin.  Having lost the most recent election in historic fashion, they've adopted an our-way-or-shutdown approach.  It's very simple: Obama and Reid are forcing a (very partial) DHS shutdown in order to protect the president's unilateral action that provides millions of illegal immigrant adults legal status, legal work papers, and in many cases, increased access to generous tax benefits.  They are willing to precipitate a DHS shutdown to uphold a power grab that's been struck down in federal court.  And they have the gall to complain about the looming DHS shutdown as if it's Republicans' fault:

Here's a crazy idea -- and I'm just spitballing here: How about voting to proceed to a debate on a DHS funding bill, rather than repeatedly filibustering it?  This shouldn't be much of a problem, given that numerous Senate Democrats have raised concerns about the Constitutional and policy implication's of Obama's power grab.  Senate Republicans produced a document recapping statements from eight members of Harry Reid's caucus expressing their reservations about the very policy they're now unanimously filibustering to protect.  With all due respect to hawkish Republicans who are skittish about DHS funding, this is a fight worth having.  It's about the Constitutional principle of separation of powers, and it's about sending a message to Democrats about future spending battles.  When Republicans were the ones blocking legislation, it was easier for Democrats and the media to paint them as the "party of no."  The dynamic has changed, thanks to voters.  A united Republican front and message discipline can win the day.  This is a decent start:

The “Obstructionist 8”: Blocking DHS funding debate despite being against the president’s unlawful amnesty plan. pic.twitter.com/aOSxk1LjcG


I'll leave you with the latest spin from the administration, which is on a credibility-destroying roll this week: