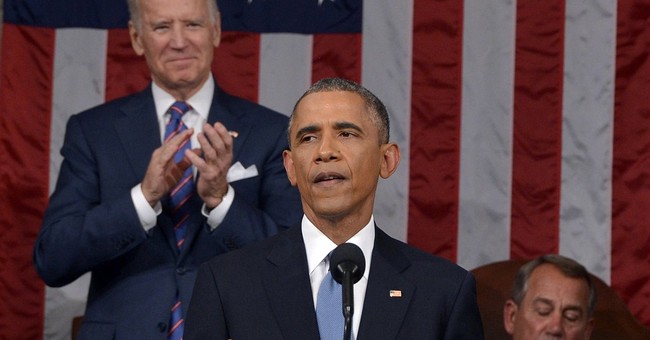 White House aides promised a "defiant" 2015 State of the Union Address, and the president delivered.  He spoke with the swagger of a man who possessed no inkling that his party had just been decimated at the polls by voters, after having personally framed the election as a referendum on his agenda.  It was a sharply ideological, base-pleasing speech, predictably and tiresomely peppered with assurances of the speaker's nonpartisan pragmatism.  The president vowed not to offer a "laundry list" of initiatives, but he couldn't quite resist, ticking off one magical wish after another -- from "free" community college, to hiking the minimum wage, to raising taxes, to legislating "equal pay for women" (a piece of demagoguery so stale that I'll simply direct you to my previous responses, including an always-relevant reminder that Obama fails to practice what he incessantly preaches).

Obama is well aware that many of these reheated policies stand zero chance of passage in the new Republican Congress, which is why they were not presented as serious or viable proposals.  Rather, they were served up as political grenades to be lobbed at the opposition during an extended infomercial for low-information voters, and to delight the (surviving) Congressional Democrats in attendance.  Republicans would be best served to politely ignore most of these bad ideas and cheap provocations, rather than taking the bait and charging down various rabbit holes to debate each item on the merits. Conn did yeoman's work fact-checking and parsing the president's speech last night; those detailed policy refutations are at once worthwhile and entirely beside the point, because the president isn't especially interested in the merits.  He's also not especially interested in authentic compromise, despite numerous appeals to the contrary.  As he demanded that the most hostile Congress he's ever faced approve his various liberal projects, the president dug in his heels against two bipartisan ideas: Green-lighting the popular Keystone Pipeline, and imposing further sanctions on Iran's outlaw regime.  He also vowed to block Republican attempts to unwind his unpopular, failing healthcare overhaul, which he again insisted is a success.


Obama struck a triumphal tone on the economy, buttressed by some undeniable, if severely belated, positive news. But most Americans still don't feel as though the proverbial page has been turned, to borrow the president's phrase.  Cheering a new dawn is risky business when the workforce participation rate is mired at a 36 year low, and wages remain stagnant.  Obama's chest-thumping on deficit reduction deservedly induced more eye rolls than earnest applause, while the national debt went curiously unmentioned.  "The verdict is in," he nevertheless intoned, suggesting that all available evidence has vindicated his policies and proven his critics wrong.  No word on why the unequivocal verdict delivered by voters last fall didn't reflect Obama's narrative.  His happy talk on foreign policy was even less convincing.  He argued that his patented "smart power" approach has been measured, restrained, tough and effective.  Rising in rebuttal: The current state of the world.  The passage of the speech that merits the most attention was the bit near the end, in which the president implored Official Washington to engage in "a better politics:"

So the question for those of us here tonight is how we, all of us, can better reflect America’s hopes. I’ve served in Congress with many of you. I know many of you well. There are a lot of good people here, on both sides of the aisle. And many of you have told me that this isn’t what you signed up for — arguing past each other on cable shows, the constant fundraising, always looking over your shoulder at how the base will react to every decision. Imagine if we broke out of these tired old patterns. Imagine if we did something different...

A better politics is one where we appeal to each other’s basic decency instead of our basest fears.

A better politics is one where we debate without demonizing each other; where we talk issues, and values, and principles, and facts, rather than “gotcha” moments, or trivial gaffes, or fake controversies that have nothing to do with people’s daily lives.

A better politics is one where we spend less time drowning in dark money for ads that pull us into the gutter, and spend more time lifting young people up, with a sense of purpose and possibility, and asking them to join in the great mission of building America.


Here, Obama dusts off the 2008 playbook and assumes his much-beloved posture as the adult in the room.  The above-the-fray, pious advocate for good governance who just wants to do right by the American people.  The optimistic outsider, untainted by cynicism, offering hope and change via the warm embrace of a better, more noble, form of politics. By delivering this lecture, Obama reveals himself as perhaps the most pathologically self-unaware human being inside the Beltway, which is saying quite a lot.  He -- Barack Obama -- actually decried "constant fundraising" (the cherry on top came in the form of a DNC fundraising email, signed by Obama, blasted out nanoseconds after this very address concluded).  The man who engineered weeks of hysterical fear-mongering about minuscule budget cuts now wants everyone else to stop appealing to Americans' "basest fears."  The polemicist who once stated that conservatives support "dirtier air, dirtier water, [and] less people with health insurance," and whose spokespeople compare Republicans to arsonists, kidnappers and suicide bombers, is lamenting demonization.


The candidate who ran on Big Bird and "binders full of women" is disappointed with others' obsession with trivial gaffes and fake controversies.  And the president who outspent his opponents by hundreds of millions of dollars over two cycles, and who established a SuperPAC after denouncing SuperPACs as a "threat to our democracy" has pronounced himself tired of "dark money" and ads that "pull us into the gutter."  The face-melting hypocrisy at play is so astounding that I genuinely can't decide if it's acute self-delusion or masters-level trolling.   If the 'better politics' Obama described on Tuesday truly represents his vision, he has betrayed his principles so thoroughly that one would think he'd be ashamed to raise the issue in public -- let alone climb back atop the high horse he's beaten to death with his own actions over the last six years.  Instead, he delivered this sermon without a glimmer of recognition that he's come to embody everything he professes to disdain and loathe about the ugly state of Washington, DC.  And literally seconds after concluding what he probably believed to be a poetic and profound lecture on the smallness of our politics, this happened:


According to one reporter in the gallery, that applause originated from…the First Lady, with a smattering of Republicans chuckling and joining in. The petulant president couldn't transcend the moment; a snarky, adolescent smack-down was just too juicy to pass up. So he ad-libbed a smirking zinger, instantly reminding everyone watching that his empty words about "a better politics" were puffy platitudes directed at others, not himself, and reinforcing exactly why this man is congenitally incapable of constructive, consensus-building leadership.  I'll leave you with my concise review of Sen. Joni Ernst's GOP response: