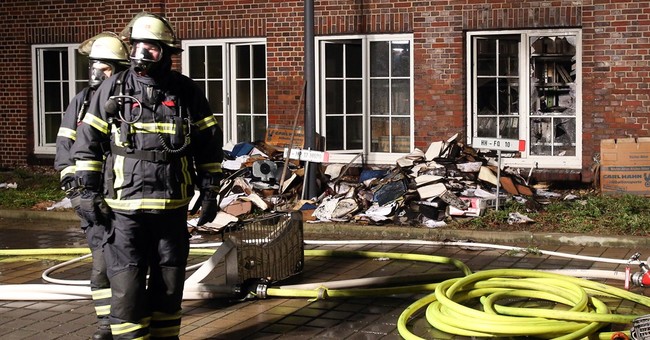 Hundreds of thousands of Parisians marched through the streets on Sunday as part of a massive show of unity, solidarity and defiance in the wake of last week's terrorist attacks. As many as one million demonstrators were joined by "more than 40 world leaders," according to the BBC. The list of prominent attendees included British Prime Minister David Cameron, German Chancellor Angela Merkel, Israeli Prime Minister Benjamin Netanyahu, and Palestinian Authority leader Mahmoud Abbas. President Obama did not attend, sending Attorney General Eric Holder to represent the United States. The march focused on themes of freedom and French national pride:

Marchers in Paris chanted "liberte" ("freedom") and "Charlie" in reference to Charlie Hebdo magazine. Some waved French flags, cheered, and sang the national anthem. A group of demonstrators carried a large model pencil with the words "not afraid" written on the side…On the scene: A human tide is flowing steadily along streets shut to traffic. Everywhere is the slogan "Je suis Charlie" ("I am Charlie"): on home-made placards, on armbands, on T-shirts. A family marches four abreast holding up print-outs in plastic sleeves. And there are flags too: full-sized French tricolores carried by demonstrators, the colours of the Republic on the square of the Republic. They are being waved from the tiers of the iconic Republic monument, where demonstrators are perched on the giant statues symbolising the old values of liberty, equality and fraternity - so vital for this nation now.


Corresponding events were held throughout France and all over the world. But as much of the world stands shoulder-to-shoulder in spirit against terrorism, the specter of violence remains.  In addition to British intelligence's chilling admonition on Friday, French authorities are warning that new terror cells have been "activated" after the Charlie Hebdo massacre:

French law enforcement officers have been told to erase their social media presence and to carry their weapons at all times because terror sleeper cells have been activated over the last 24 hours in the country, a French police source who attended a briefing Saturday told CNN terror analyst Samuel Laurent. Amedy Coulibaly, a suspect killed Friday during a deadly kosher market hostage siege, had made several phone calls about targeting police officers in France, according to the source.


A branch of Al Qaeda took credit for the deadly raid (officials now believe both jihadist brothers received training in Yemen), and it's been revealed that their associate who took hostages and shed blood at a Kosher supermarket recorded a martyrdom video pledging his allegiance to Al Qaeda and ISIS: Several stones and an incendiary device were thrown through the window of the archive of the regional tabloid daily, the Hamburger Morgenpost, early on Sunday morning. The paper had splashed three Charlie Hebdo cartoons on its front page after the Paris massacre, running the headline “This much freedom must be possible!” “Rocks and then a burning object were thrown through the window,” a police spokesman told AFP. “Two rooms on lower floors were damaged but the fire was put out quickly.” No one was hurt in the attack in the northern port city. Two people were detained and an investigation has begun, police said.


Charlie Hebdo's offices were firebombed in 2011 in a precursor to last week's horror.  Amid rising antisemitic violence in France and across Europe (which we highlighted during the Gaza war), many Jews are heading for the exits: "A survey last year from the European Jewish Congress and Tel Aviv University found that France had more violent anti-semitic incidents in 2013 than any other country in the world. Jews were the target of 40 per cent of all racist crimes in France in 2013 – even though they comprise less than 1 per cent of the population. Attacks on Jews have risen sevenfold since the 1990s," reports the Daily Telegraph.  On Friday, I wrote a piece exploring the difficult questions of defining "true Islam" and "extremism" at Hot Air.  The "not all Muslims" caveats aren't feel-good window dressing; please read these two stories.  I'll leave you with these images of solidarity among heads of state and other dignitaries: