AP on Mohammad Cartoons: We Won't Use 'Deliberately Provocative' Images 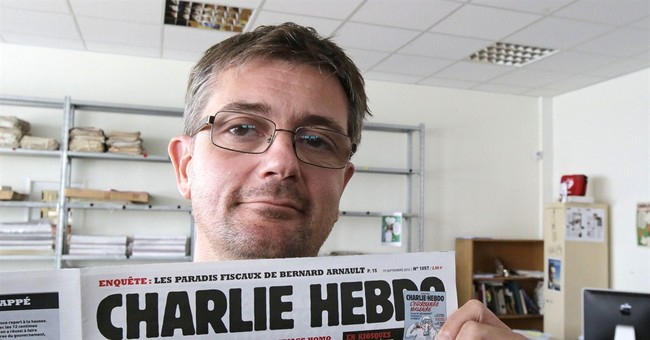 As Leah and I have each referenced today, certain press organs are covering themselves in shame today as they cover the terrorist shootings in Paris, France.  Leading the inglorious pack, perhaps, are the editors of the Financial Times, who effectively argue that their counterparts at Charlie Hebdo had it coming. Appalling:

Two years ago it published a 65-page strip cartoon book portraying the Prophet’s life. And this week it gave special coverage to Soumission (“Submission”), a new novel by Michel Houellebecq, the idiosyncratic author, which depicts France in the grip of an Islamic regime led by a Muslim president. In other words, Charlie Hebdo has a long record of mocking, baiting and needling French Muslims. If the magazine stops just short of outright insults, it is nevertheless not the most convincing champion of the principle of freedom of speech. France is the land of Voltaire, but too often editorial foolishness has prevailed at Charlie Hebdo. This is not in the slightest to condone the murderers, who must be caught and punished, or to suggest that freedom of expression should not extend to satirical portrayals of religion. It is merely to say that some common sense would be useful at publications such as Charlie Hebdo, and Denmark’s Jyllands-Posten, which purport to strike a blow for freedom when they provoke Muslims, but are actually just being stupid.


Ed Morrissey notes that this editorial's authors fail to mention that Charlie Hebdo frequently published images that offended and skewered other religions and revered images.  Was that also "stupid"?  Or is that part and parcel of equal opportunity satire?  (Remember, this is a satirical publication).  And setting aside the 'stupidity' judgment, aren't these editorial judgments particularly brave and principled, given a distressingly large number of Muslims' penchant for violent recriminations over such things?  Perhaps insulting other religions is less stupid because their adherents are less likely to, say, execute you for doing so.  The Associated Press is also refusing to use any depictions of Mohammad, citing longstanding policy against publishing "deliberately provocative" photographs:

AP spox says they will not publish photos of Muhammad: http://t.co/XfOyBUafdO pic.twitter.com/cJROr3G83a


It goes without saying that the AP must apply this standard evenly and consistently, right? No "deliberately provocative" pictures allowed:


Turns out the AP actually sells the "Piss Christ" photo. Because, you see, they meticulously eschew "deliberately provocative" photographs, unless those being provoked aren't expected to firebomb offices, start riots, or mow down cartoonists. And unless there's a buck to be made. To be clear, I'm not calling on the Associated Press to suppress and censor the above images in order to achieve some perverse consistency. I'm simply pointing out how ridiculous their supposed policies are. Embarrassing stuff from one of the world's leading news services.  Buzzfeed's Rosie Gray is working on a censorship round-up.  This example is especially egregious:


The unflattering depiction of the Rabbi is fine; blur out Mohammad.  As others have pointed out, based on the media's rules, isn't this sort of selective stifling a textbook manifestation of actual "Islamophobia"?  They're isolating Islam and treating it differently based on the fear that Muslims can't handle the slights and offense that other religious groups tend to endure without incident.  If those responsible for these editorial decisions retort, "but look at the evidence!" aren't they simply confirming that thoughts and actions condemned as "Islamophobic" aren't quite the irrational and bigoted attitudes we're lectured to avoid espousing at all costs?  How does this work, exactly?


Ban all the things.