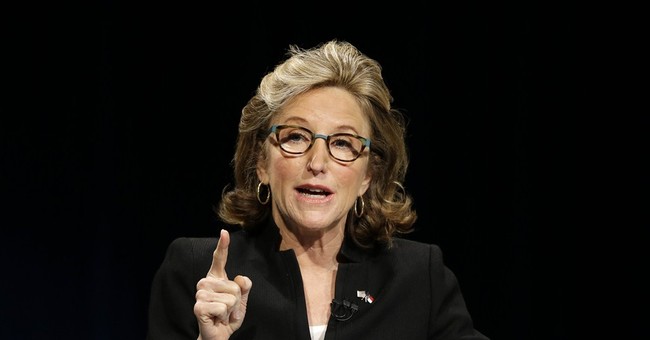 It's been a tough week for North Carolina Senator Kay Hagan, who's clinging to a razor-thin lead in her re-election fight.  She chose not to attend a 'debate' this week, ceding an hour of statewide airtime to her surging Republican opponent, Thom Tillis.  Her chair sat empty throughout the forum.  What didn't she want to discuss?  Perhaps it was her decision to skip a key classified briefing on ISIS in favor of a New York City fundraiser.  Or maybe it was the explosion of reports that her immediate family benefited directly from the "stimulus" law she voted for.  It could have been President Obama's endorsement of candidates like Hagan as strong supporters of his agenda in Washington; the extent of Hagan's fealty was underscored again in yesterday's CQ analysis of 2014 voting records:


It may just be possible that Hagan wasn't in the mood to answer yet another question about her decisive vote to pass Obamacare, which continues to harm North Carolinians:

North Carolina's largest health insurer says rates will rise by more than 13 percent on average next year for buyers of individual Affordable Care Act policies. Blue Cross and Blue Shield of North Carolina discussed the prices Wednesday. As an example, the insurer cited a typical rate for a 45-year-old man in the Raleigh area who doesn't smoke...Aside from ACA plans, the insurer is maintaining pre-existing plans that don't conform to the Affordable Care Act's requirements but customers wanted to keep. Rates for those plans will rise by an average of 13 to 19 percent, depending on when they were sold.


Double-barrelled hikes, for Obamacare exchange participants and other consumers alike.  Democrats like Barack Obama and Kay Hagan promised that rates would go down under the new law; the opposite is occurring, and most people are waking up to that reality.  In other Obamacare news, the Wall Street Journal  reports on another phenomenon accurately anticipated by conservative forecasters:

With companies set to face fines next year for not complying with the new mandate to offer health insurance, some are pursuing strategies like enrolling employees in Medicaid to avoid penalties and hold down costs. The health law’s penalties, which can amount to about $2,000 per employee, were supposed to start this year, but the Obama administration delayed them until 2015, when they take effect for firms that employ at least 100 people. Now, as employers race to find ways to cover their full-time workers while holding a lid on costs, insurance brokers and benefits administrators are pitching a variety of options, sometimes exploiting wrinkles in the law...the company, which is based in Hartford, Conn., hopes to reduce its costs by offering eligible employees a chance to enroll in Medicaid, using a contractor called BeneStream Inc. to help them sign up. The government program is more affordable for employees and saves money for Locals 8, said Chief Executive Al Gamble. “The burden gets shifted to Medicaid,” he said.


The burden gets shifted to Medicaid, i.e. to taxpayers. Two notes: First, Medicaid is a massively expensive and ineffective government program whose 'beneficiaries' (a) experience no better health outcomes than uninsured people, (b) have trouble finding doctors who will treat them, and (c) actually increase their ER visits (exploding one popular myth in support of Medicaid expansion). Second, Obamacare's employer mandate has been delayed for a large chunk of businesses into 2016, so the "coverage dumping" is just beginning. The "it's working!" file grows thicker by the day. I'll leave you with this:

Caught Red-Handed: NBC News Busted for Editing Out a Crucial Detail in the 911 Call of the Ohio Shooting
Townhall
'Who made this?': Now it's LeBron James getting the Gif treatment and it's 'brutal'
Twitchy
NY Post Reporter Masterfully Turns 'Systemic Racism' Tables on Jen Psaki During Press Briefing
Redstate
The Morning Briefing: Trump's Biggest Failure Was in Not Gutting the FBI
PJ Media