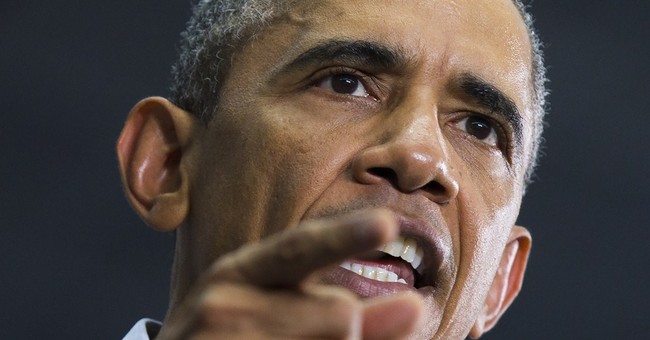 A new National Journal piece containsall the hallmarks of political "pre-criminations," as Democrats assail each other over the state of the 2014 election campaign.  Ground zero for this intra-family feud?  Iowa, where Democrats are angry about everything, including the early voting trends (regarding which Democrats have a problem, nationally):


The relationship between the White House and Senate Democrats hit a new low Tuesday evening after the administration's press office released a transcript of first lady Michelle Obama's appearance in Iowa on behalf of Democratic Senate candidate Bruce Braley. The problem: The subject line of the e-mail referred to Braley as the "Democratic candidate for governor." The botch came after the first lady repeatedly referred to the Democratic Senate nominee as "Bruce Bailey" in a campaign appearance earlier this month—and it took an attendee in the crowd to correct her mistake…Top Senate Democratic officials wasted no time lashing out at the Obama administration's political team in response, suggesting it was acting like a junior varsity operation two weeks before the midterms..."The ineptitude of the White House political operation has sunk from annoying to embarrassing," one senior Senate Democratic aide told National Journal. Another Senate official told the Washington Post that Obama's comments were "not devised with any input from Senate leadership." Democrats are growing increasingly pessimistic about their chances of holding onto the Senate...Iowa is emerging as a must-win state for Democrats if they want to halt the Republican momentum, and it's a race where Democrats can't afford late-breaking mistakes. A plugged-in Democratic House official said internal polling showed Braley trailing Republican Joni Ernst in all of the state's congressional districts, even those that typically favor Democrats. Democrats are even struggling to hold Braley's House seat.


The pre-election blame game is already underway, it would seem -- even as Republicans still have plenty of time to blow their advantage, according to, um, a Republican Senator. (Comparing the Obama political operation to a JV team is a double blow, given the president's recent entanglement with that phrase).  That last bolded morsel is especially intriguing; if Braley is trailing in every Congressional district in the state according to Democrats' own internal polls, down-ticket Democrats must be starting to sweat about reverse coattails.  Public polling continues to show a tight race with Republican Joni Ernst slightly ahead, but Democrats are not behaving as if they expect to win.  Ernst is out with a new ad that I love on several levels:


This spot, like Ernst's previous offering, just feels like it's coming from a confident winner who's looking to close strong. It's fun and upbeat, but addresses a serious issue on which Republicans hold a substantial advantage with the public.  It also feels like a subtle 'come full circle' nod to the commercial that put Ernst on the map, way back when she was an obscure player in the GOP primary.  We started this campaign with hogs, and goshdarnit, we're going to end it with hogs, too.  The farm setting is also a faint reminder of the sanctimonious, caught-on-camera attack used by Republicans to fire their first major salvo against Bruce Braley's favorability.  Meanwhile, in Colorado:


That's the latest from USA Today's polling partner, and it's full of worrisome signs for Team Udall.  President Obama isn't a popular figure in the state, and new figures calculated by Congressional Quarterly show that Mark Udall's record of voting with with Obama was nearly flawless in 2014 (with some additional scores to follow):


Taking the cake is scandal-plagued "moderate" Sen. Mark Warner of Virginia, who went a perfect 117/117.  What was Obama just saying about his reliable Washington allies who habitually vote for his agenda, again? For what it's worth, Kansas Sen. Pat Roberts -- tied in the polls with Obama donor and fake "independent" Greg Orman -- voted against the Obama line more often than any other member of the Senate.  Kansans voted to fire Obama in 2012 by more than 20 percentage points.