Brutal Video: Grimes Refuses to Say if She Voted For Obama Four Times in 40 Seconds 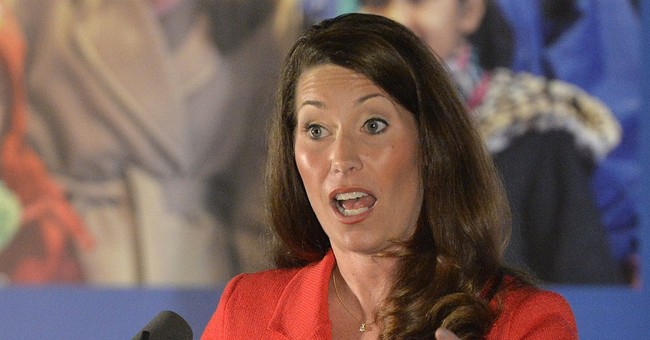 Please enjoy this short video of Democrat Alison Lundergan Grimes doggedly refusing to say whether she voted for her party's standard-bearer two years ago during a meeting with a Kentucky newspaper's editorial board.  As you watch, bear in mind that this woman was an Obama delegate at the 2012 Democratic National Convention:


Buzzfeed mines this relevant Grimes quote from two years ago:

“I’m a lifelong Democrat. I’m very proud of that and the values our party stands for. My support of our party and our nominee is well-known,” she said in an interview. “It’s no secret that I will be in North Carolina to support our nominee and party” at the Democratic presidential convention.


She's not fooling anyone with these painful evasions, as an exasperated Huffington Post writer notes on Twitter:

Yup MT @samsteinhp Grimes shd recognize that NO ONE will believe she didn’t vote for O. say “i did & he’s disappointed me on several fronts"


So why go 'round and 'round the way she did?  Simple. She doesn't want her obvious "yes" answer clipped and put into a McConnell attack ad. Barack Obama's approval rating in the state, in case you're curious, stands at a robust (35/59).  The tent pole of McConnell's campaign has been (accurately) describing Grimes as a Democratic ally the fantastically-unpopular president needs in the Senate.  She has therefore determined that it's worth tying herself into rhetorical knots to deprive Republicans of a soundbyte that'd be on the air within hours.  But here's the thing: Does this sort of performance actually help her in that regard?  Her avoidance of the question, and her motive for doing so, is painfully transparent to any sentient being who watches the tape.  The McConnell campaign might want to consider shaving this video down to 30 seconds and running it on television as-is.  In some ways, her elusive non-answers are more powerful and damaging than a "yes, but" response would be.  Her approach makes it crystal clear that she (a) voted for Obama, and (b) thinks people are stupid.  Not a good look at all.  Also, I'm not generally a fan of pressing someone on his or her actions within the privacy of a voting booth, and Grimes makes a sop to ballot box "sanctity" in her answer.  But she's a politician.  Politicians endorse people and announce their voting preferences all the time. And again, she was a loud and proud Obama delegate just two years ago.  So she's not offended that someone is asking the question; she's aware that a truthful answer would offend most Kentuckians. Meanwhile, the Weekly Standard got its hands on an internal Grimes campaign memo that were used to prep the candidate for this sit-down with the Courier-Journal editors.  A few highlights:

One heading in the memo, labeled “GUN COMMERICAL – DISAGREE WITH PRESIDENT ON GUNS,” directs Grimes to say she disagrees with Obama on gun control. “We shouldn't be banning guns based on things like their grips as a bill supported by Obama tried to do,” reads one bullet point....But at the editorial board meeting, Grimes is encouraged—“ONLY IF PUSHED,” the memo insists—to scale back the red-meat rhetoric. She’s directed to concede that guns should be kept out of the hands of criminals and the mentally ill and that she believes in “strengthening our background check system” and “putting more money into education” on gun safety...There are other issues on which Grimes’s campaign isn’t clear what her position is. In the Courier-Journal memo, the campaign provides Grimes with two talking points on health care: the first repeats her position that she has “concerns” with Obamacare and would like to fix them but does not support repealing the law entirely, while the second argues that hundreds of thousands of Kentuckians would lose their health insurance if the law were repealed. Under the “IF PUSHED” heading, there are no talking points.


As for Grimes' quadruple disavowal, Daniel Foster wins Twitter for the day.  "I don't know the man:"


I'll leave you with my appearance with Gretchen Carlson breaking down some of the new polling out of several key Senate races (for what it's worth, Fox's state-level poll release shows Grimes trailing McConnell by four):