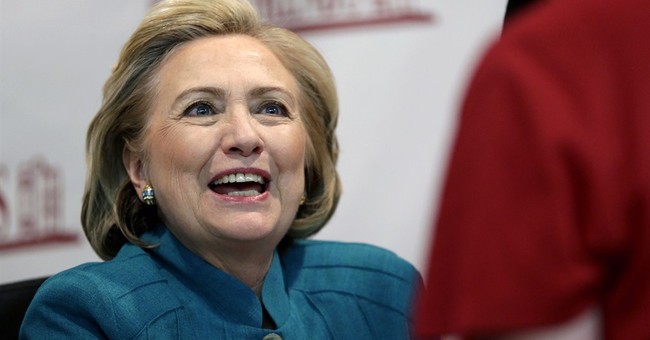 Hillary Clinton and her supporters have famously struggled to identify her major, tangible accomplishments as Secretary of State. Perhaps she's finally settled on an answer, and it's a doozy:

On Russia and Putin, @HillaryClinton tells me @OnPointRadio : "The reset worked."


Engineering a blossoming restoration of US-Russia relations is a major achievement, and Hillary would like American voters to know that she pulled it off, or something. Her timing is impeccable. Over the last few years, Moscow has complicated our efforts to halt Iran's nuclear march, ignored us completely on human rights, ostentatiously harbored a treacherous American fugitive, invaded (another) bordering country, and helped Kremlin-aligned rebels blow an airliner out of the sky. With international pressure mounting, Vladimir Putin's allies are escalating their hostilities, not backing down -- while the Russian government spins wild and debunked conspiracies about the Malaysian Airlines attack. With that spiraling catastrophe as her backdrop, Her Majesty has decided to pronounce her "reset" charm offensive a success. If you find yourself laughing incredulously, we've officially come full circle. That policy began with a hearty chortle, too: 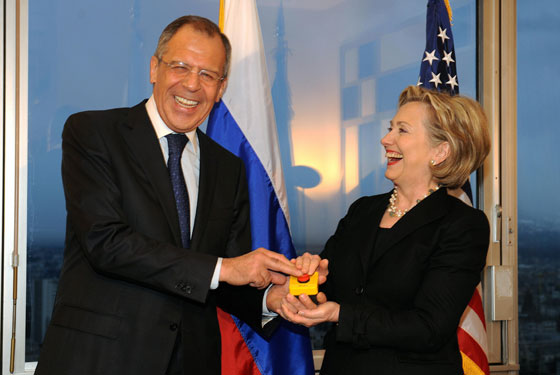 Russian media have been poking fun at the US secretary of state over a translation error on a gift she presented to her Russian counterpart. Hillary Clinton gave Sergei Lavrov a mock "reset" button, symbolising US hopes to mend frayed ties with Moscow. But he said the word the Americans chose, "peregruzka", meant "overloaded" or "overcharged", rather than "reset".


Smart power. Allahpundit explains how the Clinton spinmeisters are trying to play this, deliberately using the past tense to frame things in a Hillary-friendly manner. Good luck:

The only way to do it is to argue that it was a success but that, through no fault of Hillary’s own, of course, it collapsed in a heap. Officially, she’s going to blame the failure of the reset on Putin re-assuming the presidency after four years of Medvedev, but that makes no sense. As Hillary herself concedes (“of course Putin still pulled the strings”), Putin was calling the shots as prime minister during Obama’s first term while Medvedev kept his presidential seat warm. Russian law forbids more than two consecutive terms as president — for now — so Czar Vladimir temporarily stepped aside for a catspaw. She’s drawing a lame distinction between Medvedev and Putin simply as an excuse for why her biggest initiative as Secretary of State now lies in ruins. Unofficially, of course, she’s also drawing a tacit contrast between herself and Obama: Things with Russia were fine during his first term but once she left State, everything went to hell. If having Putin as president of Russia is the key to all this, I’m not sure why we should expect different foreign policy results from President Hillary; after all, Putin will still be czar or king or emperor two years from now. But you’re not supposed to think too hard about this.


"Don't think too hard" might as well be an early frontrunner for her 2016 campaign-in-waiting's slogan. She's going to ask voters to give her political credit for all of the good things that happened during her husband's presidency and the Obama administration, while absolving her of the negative developments. She'll cherry-pick all day and all night. Clinton economy? Let's bring it back. The Obamacare mess? I would have done it more effectively. Etc, etc. But until she formally throws her hat in the ring, we'll have to endure an exhausting parade of coy hints, and an increasingly steady diet of the 'First Woman President' narrative.