VA Official on Whether Wait List Manipulators Should Be Fired: Uh, I'm Not Sure 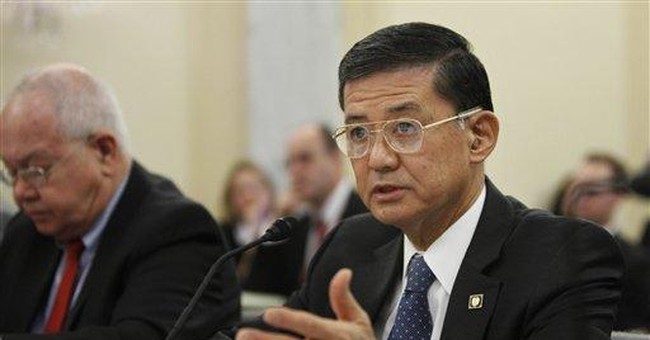 Veterans Affairs Secretary Eric Shinseki testified before the Senate Veterans Affairs Committee today, pronouncing himself "mad as hell" over the burgeoning healthcare scandal rocking his department, but affirming that he won't resign. He also described the numerous instances of wait time record manipulation as "isolated incidents," adding that investigations are underway:

When Committee Chairman Sen. Bernie Sanders of Vermont asked Shinseki if "cooking the books" was a problem in the VA health system, the secretary said: "I'm not aware, other than in a number of isolated cases" that there was evidence of that. However, Shinseki said the VA should take a "thorough look." Overall, Shinseki said, the VA system is good. He also called for hearing from the inspector general before coming up with solutions, a position backed by Sanders...


Since we last wrote about this issue on Monday, two more "isolated incidents" have arisen at VA health facilities; one in North Carolina, and the other in Illinois. That brings the running total to seven -- and that's just since CNN broke their Phoenix story in late April. Shinseki placed a lot of emphasis on the just-ordered Inspector General nationwide probe looking into these matters, but the VA has been aware of these, and related, abuses for some time. The Wall Street Journal reports that according to the nonpartisan Government Accountability Office (GAO), the VA has made virtually no progress in addressing the issue since a 2012 report highlighted systemic problems with the department's "scheduling procedures." NBC News reported this week that "top VA officials" learned of specific scheduling problems in a memo written in March of 2013:


Adding to the scandal, a memo obtained by NBC News suggests top VA officials had been warned about a scheduling problem last year. Secretary Eric Shinseki had been developing a reputation for trying to expand patient care, but as the number dangerous scheduling practices are uncovered frustration around the country increases. There's growing outrage this morning over reports of poor or delayed care at the hands of the Veterans Affairs health care system...An internal memo from March 2013 obtained by NBC shows top VA officials learned of the problem well before the current allegations, and had been quietly trying to fix it.


CBS News also noted that it took their televised report on complaints in Wyoming for any disciplinary action to be taken, even though the VA was formally appraised of the problems at that location last December. Lots of "isolated incidents." Lots of missed, ignored, or buried red flags. Shinseki's Undersecretary of Health, Robert Petzel, also underwent questioning today. Georgia Sen. Johnny Isakson pressed Petzel about whether or not VA officials who deliberately cook the books to obscure accurate stats about wait times for care deserve to be fired. His answer:

PETZEL: The individuals are, as you mentioned, held accountable. I can’t give you an example specifically, but if someone were found to be manipulating inappropriately the scheduling system, they would be disciplined.

ISAKSON: Would that — would they lose their job?

PETZEL: I don’t know whether that’s the appropriate level of punishment or not.


He doesn't know? Re-read this article and try to discern if you'd have a better sense of the correct answer to that question. Bureaucracies are positively allergic to accountability. The White House and some Democratic Senators have strongly defended the VA, even as these allegations continue to mount. I'll leave you with this:

Just like he was outraged about his IRS scandal --> WH: Obama angry about VA allegations http://t.co/ECeWTWe7F3


The president's outrage evolution on the IRS scandal -- which continues to produce new evidence -- has been telling. Oh, and let's not forget that Obama made reducing VA wait lists a point of emphasis during his presidential campaign. His administration's results on the issue, sadly, are exactly what you might expect.