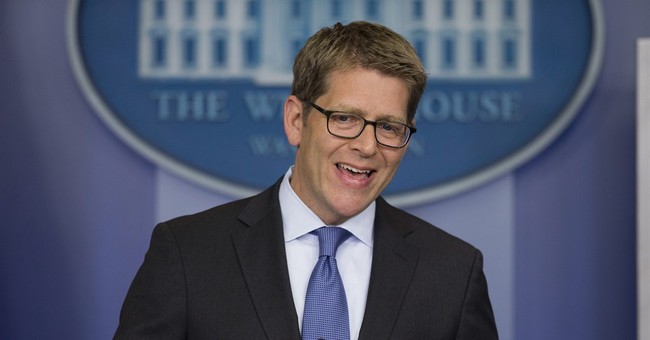 Beyond the conservative blogosphere and Fox News, the mainstream media's reaction to yesterday's release of crucial new Benghazi emails was...muted, to say the least. That all changed at this afternoon's White House press briefing, at which ABC News correspondent Jonathan Karl pummeled Jay Carney with questions about the White House's political response to the deadly terrorist attacks. Watch the whole thing, then scroll down for extensive analysis:


(1) Bravo to Jonathan Karl for really pressing on these points. He forced Carney to produce spin that is not at all credible, for reasons I'll address below. Today also represents something of a vindication for Karl, whose previous accurate reporting on Benghazi has been assailed by the administration as false. Mediaite's Noah Rothman has the background on that, but the bottom line is that Karl and former CBS News reporter Sharyl Attkisson were correct all along: The White House did, indeed, play a role in shaping Susan Rice's deeply misleading Benghazi talking points, and they lied about it. Carney himself once claimed that the only change the White House or State Department made to her talking points was a single cosmetic revision. For the umpteenth time, that has been exposed as a lie. True to form, Carney treated Karl with sneering contempt throughout the exchange, at one point intimating that the journalist was too jet-lagged to ask coherent questions.


(2) Former CIA Deputy Director Mike Morell testified earlier this month that the agency was not the source of the bogus talking point that the Benghazi attacks were rooted in an internet video. And yet, that fairy tale ended up in Susan Rice's official talking points days later -- and days after the administration knew beyond a shadow of a doubt that the raid was in fact a coordinated terrorist attack. Who dreamed up the "internet video" excuse? We still don't have the answer to that question, but it wasn't the intelligence community. And it did appear in the now-infamous Ben Rhodes email that finally came to light this week. The key quote: The administration's goal was to "underscore that these protests are rooted in an Internet video, and not a broader failure of policy." It's right there in black and white. A smoking gun, right? Wrong, says the White House's top spokesman...


(3) Carney's latest explanation is that the Rhodes email (which directly and comprehensively contradicts the White House's previous assertions)...wait for it...wasn't about Benghazi. These talking points were about the broader Middle East protests, he said, not Benghazi. This is a stunning and insulting claim. Are we to believe that top level White House officials were heavily involved in parsing Susan Rice's talking points about everything except the deadly attack that led to the assassination of a sitting US Ambassador? Beyond that smell test, there's ample concrete evidence disproving Carney's ludicrous spin. For instance, Rhodes included an entire bullet point about bringing attackers "who harm Americans to justice." That's not a reference to Benghazi, Jay? The same email included a sample question Rice could face from television interviewers that was explicitly about Benghazi. And then there's this:

.@PressSec's argument on new Benghazi emails is that they were about Mideast writ large. But there's a whole section titled "BENGHAZI"


(4) The White House and senior administration officials repeatedly linked Benghazi to the internet video as they deliberately downplayed the terrorism angle (despite all of the intelligence). Indeed, President Obama and Secretary of State Hillary Clinton told the grieving mother of a murdered Benghazi victim that the attacks were "about the video." Obama and Clinton fed that untruth to Patricia Smith on the day of the memorial service on September 14, 2012 -- which happens to be the exact day Rhodes' internal email was sent. Smith's recollection:

Pat Smith: “Oh yes, they all told me about the reason that this happened was the video. Every one of them told me that.”

Pat Smith: “Yes, they actually did, and Susan Rice also.”


Carney insists that Rhodes email wasn't about Benghazi, and thus the White House wasn't involved in crafting false talking points. But the Rhodes email fantasy that the attacks "were rooted in an internet video" were also embraced by -- and perhaps even conceived by -- the people at the very top of the food chain, entirely within the context of explaining what happened in Benghazi.


(5) Karl asked why this batch of emails had not been previously released to Congress and the public. Remember, the White House has been saying that its previous Benghazi document dump was exhaustive, proving that the story was over. Carney's slithery answer:

"This document was not about Benghazi."


Later in the press conference, the Press Secretary went on to assert that the White House had "put out" all of the information on Benghazi. That's demonstrably false. They withheld these emails, which were most assuredly about Benghazi (see items 3 and 4), and only came to light when Judicial Watch sued the administration. By the way, the FOIA request that prompted that lawsuit specifically asked for talking points pertaining to Benghazi -- and the administration, under duress, produced...ahem...the Rhodes email:

Carney also regurgitated familiar bromides about making sure that a Benghazi-style attack "never happens again," and bringing the terrorists to justice. It's been 20 months since those murders took place, and zero arrests have been made. I'll leave you with the key talking points-related question from my Fox News colleague Stephen Hayes, who's followed this story as closely as anyone:

Acting CIA Dir Michael Morell says the video claim Susan Rice made did not come from the CIA. Where did it originate? #Benghazi @pfeiffer44