Why do conservatives continue to harp on Obamacare's enrollment figures? Because the administration has placed such a heavy emphasis on them as a key metric of quantifying the law's "success," and some in the media have dutifully taken that cue, laboring to construct a "winning streak" narrative for Obamacare. In a post about the law's stubborn unpopularity among the American people, a Washington Post analyst puzzled over how public polling has failed to reflect the supposedly positive developments of last month. Perhaps the reason is that people are suspicious of the White House's numbers -- which, even if they were accurate, fail to neutralize the core flaws of the law. The Obamacare defenders can't proclaim 'mission accomplished' over bending the cost curve down, or reducing premiums, or honoring promises about preferred plans and doctors. They aren't likely to brag over its effects on employment and economic growth either; nor will they talk much about its overall price tag, compared to the figure they waved around in 2010. Several polls have shown that for every one individual whose family has benefited from Obamacare, two say they've been negatively impacted. And the ranks of the aggrieved may swell as more cancellations, significant rate hikes, and access shock continues to take hold. That's a dreadful track record for a law that was sold to the public as a veritable legislative panacea, blessedly free of trade-offs or losers. With that mirage razed, the White House is relying heavily on ostentatious back-slapping over eight! million! enrollments! as the dubious basis for declaring victory.

An elementary component of killing their buzz is determining how many of these so-called "enrollees" have completed the process by paying for their premiums. Insurers have publicly indicated that between 80 and 90 percent of Obamacare exchange enrollees are paid up. A report by the House Energy and Commerce Committee found that number to be far lower based on a questionnaire filled out by 160 participating insurers on the federal exchange, but those results were incomplete and flawed. There's little doubt that the payment delinquency rate varies among states and carriers -- with some reaching north of 90 percent, and others languishing in the 70 percent range and below. If we assume that the overall payment rate is in the neighborhood of 85 percent (which may be generous), the "eight million" figure falls to under seven million. Toss in the "many" duplicate enrollments, and it's fairly clear that the White House fell short of its goal. It's impossible to nail down the exact figures, of course, because the mechanisms for tabulating the statistics are still under construction. Of the insurance executives called to testify on the Hill last week, each one of them confirmed that Healthcare.gov is still lacking core operational components:


Politico reported last month that the project has lagged even further behind schedule, with administration officials declining to offer updated timetables or cost estimates. The entire project was supposed to have launched intact on October 1, 2013 -- more than three years after Obamacare was signed into law. Despite the substantial lead time, much of the work didn't kick off until after the 2012 presidential election because Team Obama didn't want any bad news leaking out before the president was safely re-elected. Governance. A second salient question about the administration's oft-touted enrollment totals is how many of those "newly insured" consumers actually lacked coverage prior to the advent of Obamacare? Due to the ongoing dysfunction of Healthcare.gov, we lack solid government numbers on this question, but several credible organizations have pursued answers via thorough independent analyses. McKinsey, Goldman Sachs and the RAND Corporation all determined that among "new" Obamacare enrollees, more than two-thirds previously had health coverage. McKinsey released updated results over the weekend, and their new numbers barely budged. Just 26 percent of Obamacare exchange enrollees lacked prior coverage: 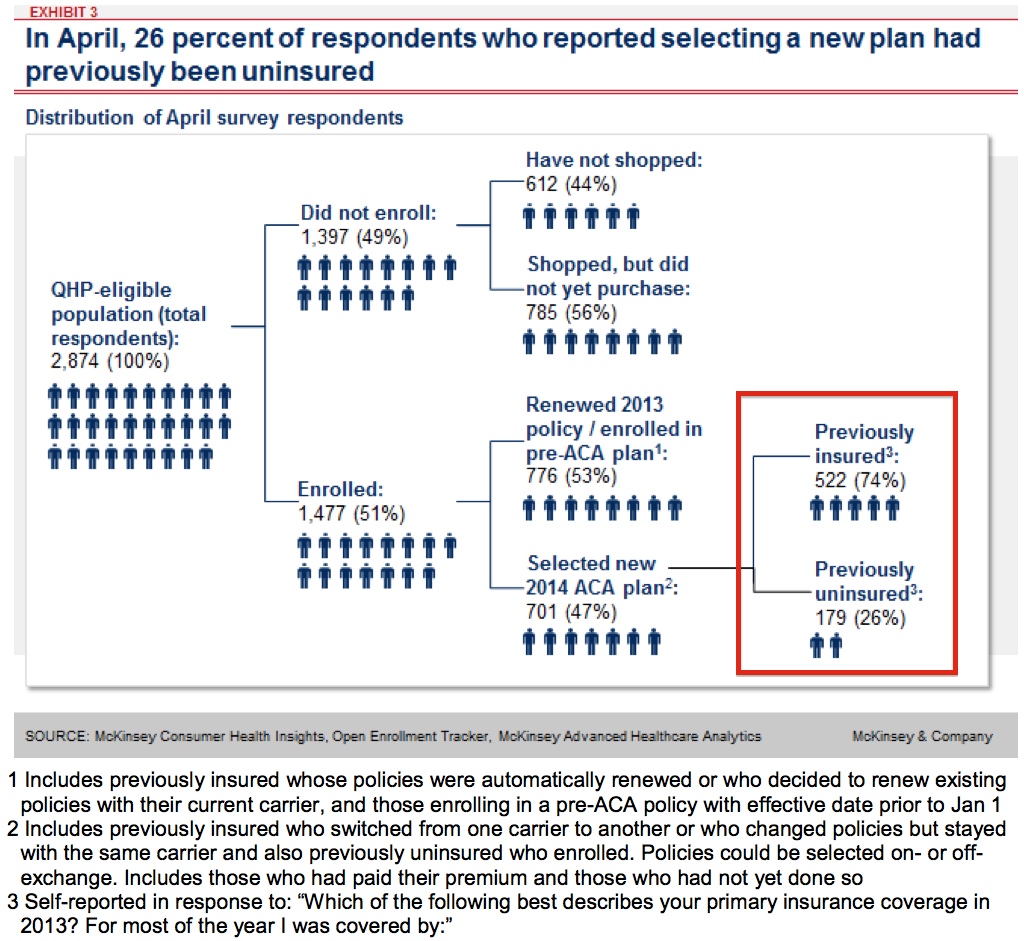 Take note that the majority of eligible consumers who ultimately did not enroll did browse their options prior to choosing to take a pass. Other polling has indicated that the top factor in people deciding not to sign up for Obamacare plans was high costs. This McKinsey study indicated that premium payment rates have climbed into the mid-80s percent range, with previously-uninsured and young consumers responsible for the highest delinquency rates. Even fewer "young invincibles" in the risk pools does not bode well. Health wonk Avik Roy runs these new findings against the administration's inflated enrollment totals and draws the following data-based conclusion:


Fewer than three million genuinely new and previously-uninsured enrollees thanks to Washington's multi-trillion-dollar scheme that literally requires people to obtain coverage. Congratulations on that glittering success, Democrats. The American people are profoundly impressed and grateful.