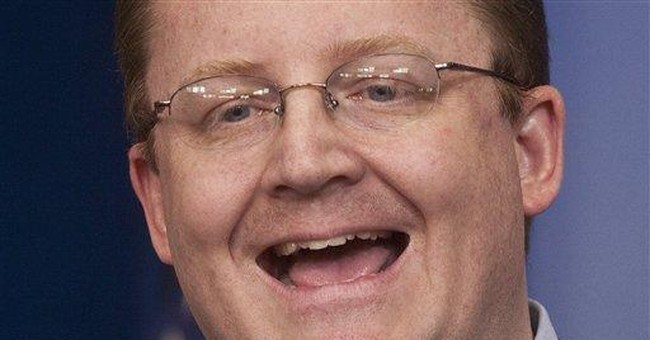 As you read this, keep in mind that Robert Gibbs isn't some marginal figure. He is as close to Barack Obama's inner circle as anyone in America, and served as the administration's official mouthpiece for years. So when he starts talking about significant changes to Obamacare, people should sit up and listen. These remarks could reasonably be considered White House-planted trial balloons:


“I don’t think the employer mandate will go into effect. It’s a small part of the law. I think it will be one of the first things to go,” he said to a notably surprised audience. The employer mandate has been delayed twice, he noted. The vast majority of employers with 100 or more employees offer health insurance, and there aren’t many employers who fall into the mandate window, he said. Killing the employer mandate would be one way to improve the law — and there are a handful of other “common sense” improvements needed as well, he said...And, most importantly, Gibbs said “health care has to add an additional layer of coverage cheaper than the plans already offered.”


A few points: (1) Yes, the employer mandate has already been delayed twice, tacit admissions that the law is bad for business. Will the administration keep punting it, or will they simply declare it dead? The mandate is built into the law. The White House's postponements of this provision are legally dubious at best; they absolutely do not have the authority to excise entire sections of the law permanently. Will Congress act? I'd also imagine that many employers would dispute Gibbs' characterization of this mandate as "small." (2) How would the demise of the employer mandate impact the mechanics of the law? Its existence has been baked into CBO estimates on revenues and coverage. If a portion of the law designed to ensure coverage for millions, which obviously impacts revenues, goes away, what then? CBO already projects that 31 million Americans will remain uninsured under Obamacare.

(3) Absent a federal mandate to provide coverage, and facing rising costs, many businesses could be incentivized to just dump employees into Obamacare's exchanges. A 2012 Deloitte survey indicated that one in ten American businesses were already planning to stop providing coverage -- and that was with the mandate fully intact. Such a move would add countless Americans to the roster of those burned by Democrats' "keep your plan" lie, and could heap major additional costs onto taxpayers (who fund the law's subsidies). It would also rapidly expand the individual healthcare market, which is where the sharpest cost increases are taking place. And are Democrats prepared to cancel a mandate on corporations while keeping the individual mandate tax in place for families?


(4) To that end, Gibbs floats the idea of eventually adding a cheaper coverage level into the exchange mix, below the "bronze" level -- which has proven unaffordable for many people. This, like the administration's expansive "hardship waivers," is a concession that the "Affordable" Care Act is no such thing for many Americans. It would also re-establish an group of bare-bones plans that Obamacare defenders have dismissed as "sub-standard" or "junk" coverage. Healthcare expert Bob Laszewski has been advocating this change, which he argues must be implemented immediately, despite the risk of "anti-selection." Significant premium increases are expected in 2015 and beyond. So even as top Democrats beat their chests over their grand "achievement" this week, vulnerable Democrats aren't eager to join the celebration:


But while Obama administration officials popped champagne to celebrate the enrollment figure, Democrats on the ballot this year continue to tread cautiously. Vulnerable incumbents who voted for the Affordable Care Act but have distanced themselves have no plans to suddenly embrace it. They plan to continue emphasizing the ways they want to “fix it” and “make it work.” ... Added a prominent Democratic pollster, “[The enrollment success] is helpful but it’s not going to fundamentally change the playing field. The less we’re talking about Obamacare, the better off we are.”


If you read that full Politico story and others like it, you'll find expressions of relief among Democratic strategists. Finally we have some good news, so our team will be less skittish! There's light at the end of the tunnel. It's as if they're deliberately ignoring, or are genuinely ignorant of, Obamacare's looming PR headaches. If Democrats are determined to convince themselves that a new day is dawning, Republicans should let them. They'll be less equipped to deal with round two. I'll leave you with this:

UPDATE - We've written about how the administration is exaggerating its enrollment numbers on the exchanges and on Medicaid. Turns out that their "more than three million" stat on young people staying on their parents' plans is also bogus. Details here.