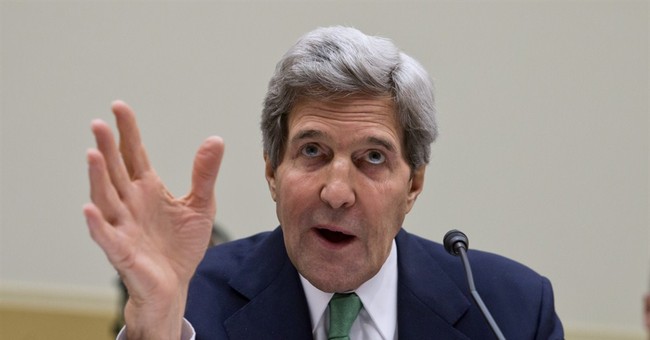 The Secretary of State admitted earlier in the week that the Obama administration's slap-dash Syria policy has failed. Now he and other top officials are conceding that -- surprise! -- the Putin/Assad plan, to which the White House hastily agreed, has only served to improve Assad's position and shore up his regime. Recall that Obama's official policy position is that "Assad must go." Here is US intelligence chief James Clapper spelling out the wages of the Obama administration's flailing policies:


Clapper testified before a U.S. House of Representatives intelligence committee Tuesday that last year’s agreement to eliminate Syria’s chemical weapons left President Bashar al-Assad in a strengthened position. “The prospects are right now that [Assad] is actually in a strengthened position than when we discussed this last year, by virtue of his agreement to remove the chemical weapons, as slow as that process has been,” said Clapper.


Clapper acknowledges that the process of ensuring Syrian compliance has been "slow." Indeed. Over to you, Reuters:


Syria on Wednesday missed a deadline to hand over all the toxic materials it declared to the world's chemical weapons watchdog, putting the programme several weeks behind schedule and jeopardizing a final June 30 deadline. At the same time, opposition activists say the Syrian air force is attacking the country's biggest city, Aleppo, with barrel bombs, forcing many to flee. Turkey was turning away some of those refugees because camps were now full. Under a deal reached in October between Russia and the United States, which helped avert a U.S.-led missile strike against the government of President Bashar al-Assad, Syria agreed to give up its entire stockpile of chemical weapons by February 5. Russia said on Tuesday its ally Damascus would ship more chemicals soon, but Western diplomats said they saw no indications that further shipments were pending.


We've known missed deadlines were coming for some time, but this one is especially big. And Russia's assurances that the Assad regime will hold up its end of the farcical bargain "soon" don't appear to be grounded in any real evidence. Meanwhile, Assad -- Iran's top ally, whom Hillary Clinton labeled a "reformer" -- continues to butcher his own people, while his jihadist opposition may have updated its mission to include attacking the United States. What has our Syria policy achieved, exactly? Aside from temporarily extricating Barack Obama from an untenable political position, that is. In response to a pointed question, White House spokesman Jay Carney said yesterday that the president is not at all concerned that the Syria deal is "falling apart," even as his Secretary of State evidently disagrees:


Is Carney unaware of John Kerry's assessment? Does the White House disagree with its Secretary of State's analysis of the situation? All Carney could offer up was a toss-away line about the administration "making its views known that Syria must abide by its commitments." But Syria isn't abiding by its commitments, that's the whole point. They've missed multiple deadlines. "Must" they do so, Mr. President? Would that be in the same rhetorical sense that Assad "must" go? And that Assad "must not" breach the chemical weapons red line you laid out, then retreated from? Carney went on to cite Russia's claims that Damascus is just around the corner from meeting its obligations, which the Reuters piece slapped down. I'll leave you with the relevant quote. Again. "Western diplomats said they saw no indications that further shipments [of Syrian chemical weapons] were pending."