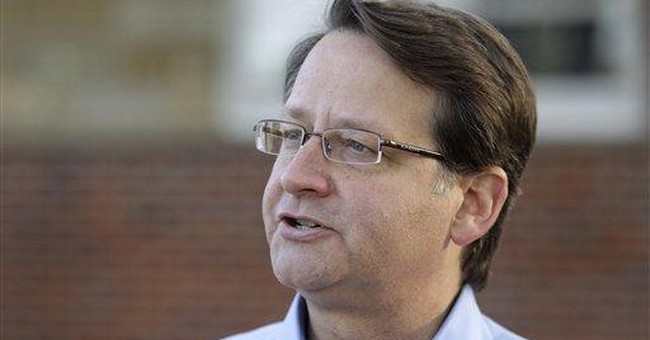 Democrat Congressman Gary Peters is running for US Senate in Michigan, where he's facing a strong Republican opponent in former Secretary of State Terri Lynn Land. Like other Democrats across the America, Peters is worried sick about the political impact Obamacare -- a law for which Peters voted in 2010. Unlike many others, however, he's taken the extraordinary step of dispatching a team of lawyers to bully Michigan broadcasters into refusing to air a television ad that's critical of the healthcare overhaul. The spot is being run by Americans for Prosperity and features a cancer patient who was among the millions whose previous health plans were dropped as a result of Obamacare. The mother who's battling leukemia says politicians broke their word about the law, and that she's hurting because of it:


Julie Boonstra is one of the many victims of Democrats' egregious "lie of the year," and now Democrats are looking to silence her story via intimidation and legal saber-rattling:

After relating her story publicly in an ad produced by the advocacy group Americans for Prosperity (AFP), Peters dispatched lawyers to prevent the spot from running on local television stations. Boonstra, who says she is now struggling to pay out of pocket for her rising healthcare costs, told the Washington Free Beacon she is stunned by Peters’ efforts to censor her story. “I’m appalled. I’m appalled as a mom, as a woman, and as a cancer patient, as someone living with cancer … who has stood before this nation to say, ‘I cannot afford that out of pocket expense,’” said Boonstra, who said she was given a 20 percent chance of surviving her disease. “As a Michigan resident, to silence my voice, I’m absolutely appalled.” Peters, who is running for a seat in the Senate, instructed his legal council earlier this week to demand that stations stop running the AFP ad until additional evidence of the cancer victim’s claims could be produced. “For the sake of both FCC licensing requirements and the public interest, your station should immediately require AFP to provide the factual documentation for its claims if you are going to continue airing this advertising,” read the letter from Peters’ lawyers.


Liberals are angry and distraught -- not over Boonstra's predicament and sense of betrayal, it would seem, but over how effective her message is. So they're hinting that broadcasters who run this ad might be jeopardizing their FCC license by doing so. This behavior would fall into the category of "gangster government," as coined by Michael Barone. Democrats and some media members are further insisting that Boonstra doesn't understand her own situation as well as they do. Obamacare actually improves her situation, they say. Stunned by the tactics and arrogance of her detractors, the cancer victim says she's outraged that Peters is trying to shut her up, and continues to assert that the law "is hurting me." She cites her dropped plan (a broken promise that in and of itself gives her standing to attack the law), as well as unpredictable costs as evidence of the damage she's suffered. The Washington Post's fact checker -- whose analysis is cited in the letter from Peters' attorneys -- concludes that because her new premiums are lower, Boonstra's overall costs "could well even out" over time thanks to Obamacare's coverage out-of-pocket costs caps (which have been delayed for a year).

First of all, "could" is not the same as "will." Will her premiums creep or jump higher in the future? That's not a bad bet. Also, while she is fortunate to have reduced premiums, millions of others are experiencing the opposite effect on that front. Secondly, Boonstra says her new plan's out-of-pocket costs are unaffordable in spite of the limits, and says the unpredictability of month-to-month expenses is a hardship. Finally, Obamacare advocates erected an impossible standard of no downsides or losers, to which they're rightly being held in the court of public opinion. Having heard the endless vows and slogans from Democrats, Boonstra assumed that she could keep her plan and doctor, and would also see her medical costs drop substantially. Instead, she lost the plan she liked, was forced to track down a new plan that would include her specialist, and doesn't know how she's going to cover high payments that will come directly out of her pocket. Here she is on The Kelly File, responding to the Democrat in the segment who suggests that she simply doesn't know what's best for her:

This mom with cancer was unquestionably misled about the healthcare law. She says it is harming her coverage and finances. Democrats' solution to their political fix is to accuse her of misleading (intimating that she'd best shut her mouth and be grateful for all they've done for her) in order to block television stations from airing her story. In case you'd forgotten, the White House attacked the veracity of another angry female cancer patient back in November. In what universe is this considered a winning strategy?