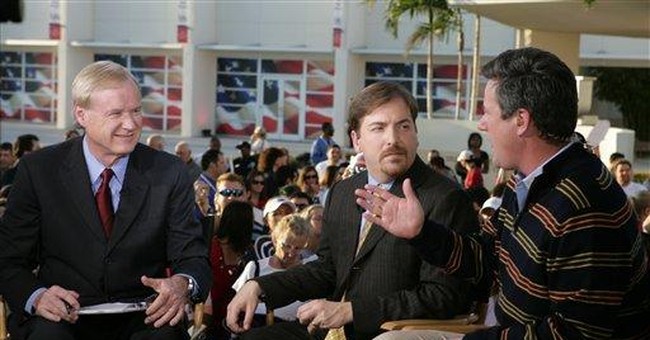 When I first saw this headline yesterday, I instantly stuffed it into my brain's "idle speculation on a slow news day" file. (This news hadn't dropped yet). Not so, says an NBC "insider" who spoke on background to Ed Morrissey. Is this actually a thing?


Neither Alex or I could get Joe Scarborough to comment on the article; he declined when I asked personally. However, I did speak with an NBC insider with some familiarity of the show’s production, and the source thinks that this is more serious than one might imagine — but still a long way off from a decision...According to this source, the thinking has deepened a bit since the Bridgegate scandal and its impact on Chris Christie’s chances — perhaps best considered as slightly more serious mulling than simply a flight of fancy. Plus, the insider points to some advantages Scarborough has with his current platform. The “entire life at Morning Joe is like a campaign,” the source told me, adding that the seven years Scarborough has spent engaging partisans on both sides has made him into an expert campaigner and communicator. Thanks to that long experience in the trenches and an “obsessive-compulsive” approach to show prep, Scarborough has developed “a ‘Rain Man’ memory” on issues and data.


Ed notes that Scarborough recently published a book that reads like a political call to arms, elements of which could easily transition into a campaign platform down the line. And the former Congressman would likely be a relatively strong debater, having honed his communication skills in a hostile environment for years. Most interesting to me is the MSNBC anchor's apparent refusal to comment on the original Daily Caller story; he demurred again when Ed contacted him. If he thought the idea was preposterous, he could laugh it off with a flat denial. But he hasn't slammed the door shut -- so far, at least. Real talk: Joe Scarborough enjoys a very lucrative media platform, and he would enter the race as the most moderate candidate (at least as far as perceptions go) in the hypothetical field. Is there any conceivable path to victory for him? And if not, would the upside of going to bat for his brand of conservatism on a national stage outweigh the downside of walking away from his sweet television gig to run a quixotic campaign? Besides that, what would his niche be? Allahpundit thinks the center-right lane on the 2016 expressway is already getting a bit crowded:


I can imagine Christie blowing up before the primary campaign gets going (it may be happening already, in fact); I can imagine Jeb deciding the “Bush” name is too high a hurdle; I can imagine Rubio concluding it’s smarter to protect his Senate seat right now than to roll the dice on the presidency; I can imagine Ryan passing because he’d rather set America’s fiscal agenda as chairman of Ways and Means; and I can imagine Walker losing his gubernatorial reelection bid in a massive push by Wisconsin’s left. What I can’t imagine is all five of those things happening, leaving a giant hole in the center that no one more prominent than Joe Scarborough is tempted to try to fill. Even Bobby Jindal, whose brand is conservative, would probably tack left to become the centrist candidate if a vacuum that big opened up. Any one of those guys would be a natural pick over a guy who served six years in the House and is now known for being the most conservative host on the most over-the-top liberal media organ in America.


The DC story reports that "the thinking behind a Scarborough bid" includes a perceived desire among Republicans to nominate a Washington "outsider." That very well may be the case, but I'm not sure if primary voters would consider a card-carrying member of the Beltway/Manhattan-corridor media establishment to fit the bill. I suspect by "outsider," most conservatives are referring to reformist governors, not a member of the chattering class -- on MSNBC, no less. On the other hand, Scarborough's voting record in Congress was actually quite conservative. He backed plans to consolidate or eliminate several federal agencies, including thre Department of Education. He sponsored legislation that would have required the US to withdraw from the United Nations. All told, he amassed a 95 percent lifetime score from the American Conservative Union. That being said, just imagine the primary season attack ads: