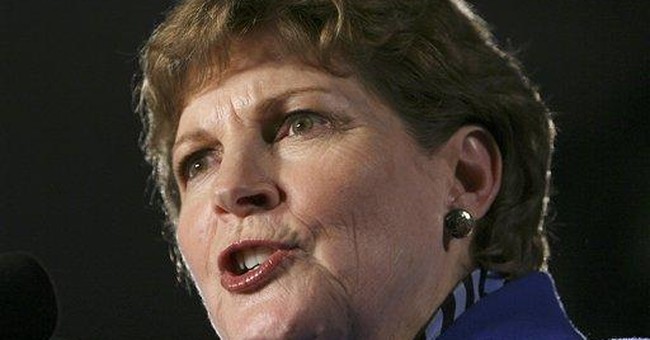 These ads and this poll must really be eating away at Sen. Jeanne Shaheen (D-NH). In a recent appearance on WKXL radio, Shaheen parroted the problematic Zeke Emanuel line in response to questions about the president's bogus "keep your doctor" pledge, and ducked giving a direct answer on whether she'd vote for Obamacare all over again (click through for audio):


Americans who have lost access to their health care providers due to ObamaCare may be able to get their old doctors back but only if they are “willing to pay more.” That’s Sen. Jeanne Shaheen’s (D-NH) solution to the problems resulting from the healthcare law she voted for, which blocks tens of thousands of Granite Staters from accessing their doctors and hospitals. “At least for people who are willing to pay more, that they have that option of going to their doctor and hospital no matter what their insurer does,” Shaheen stated...Shaheen said the lack of New Hampshire doctors and hospitals in the approved ObamaCare networks is “clearly still an issue.” Nevertheless, Shaheen maintains, “I don’t think anyone wants to go back.” Later in the interview, Shaheen refused to state definitively whether or not she’d vote for ObamaCare again knowing what she knows about the law now. “I would’ve designed it differently had I been designing it. I wasn’t the person who was writing the law. Hindsight is 20/20,” she said.


First off, the promise wasn't "if you like your doctor, you can keep your doctor...if you are willing to shell out more money. No, the vow was people could keep their trusted physician, period-- in addition to seeing their costs go down. Secondly, contra Senator Shaheen's sense of things, most people would, in fact, prefer "to go back" to the old (admittedly flawed) system. They see the reform as making things worse. Finally, if she's so certain of her assertion, why doesn't Shaheen rush out to the cameras and state in no uncertain terms that she's proud of her Obamacare vote, and would gladly cast it again? Also, does she think she's fooling anyone with this demurral? She's as loyal as they come:


While we're on the subject of the president, he told Bill O'Reilly on Sunday that the law is "working the way it's supposed to." That must be news to these workers and these children. Indeed, the Washington Post reported over the weekend that errors still plague Healthcare.gov, and are preventing people who were screwed over by previous errors to rectify the situation. And their nightmare won't be over any time soon, either:


Tens of thousands of people who discovered that HealthCare.gov made mistakes as they were signing up for a health plan are confronting a new roadblock: The government cannot yet fix the errors...For now, the appeals are sitting, untouched, inside a government computer. And an unknown number of consumers who are trying to get help through less formal means — by calling the health-care marketplace directly — are told that HealthCare.gov’s computer system is not yet allowing federal workers to go into enrollment records and change them, according to individuals inside and outside the government who are familiar with the situation...The Obama administration has not made public the fact that the appeals system for the online marketplace is not working. In recent weeks, legal advocates have been pressing administration officials, pointing out that rules for the online marketplace, created by the 2010 Affordable Care Act, guarantee due-process rights to timely hearings for Americans who think they have been improperly denied insurance or subsidies. But at the moment, “there is no indication that infrastructure .?.?. necessary for conducting informal reviews and fair hearings has even been created, let alone become operational,” attorneys at the National Health Law Program said in a late-December letter...


I'm sure they'll get to addressing that right after the get those payment systems built. Meanwhile, Americans are frustrated by the lack of answers they're receiving from Obamacare bureaucrats, stunned by sky-high deductibles, and stung by increased premiums:


But remember, voters, Obamacare is "working the way it's supposed to." The president said so. Two days ago. Don't believe your lying eyes.