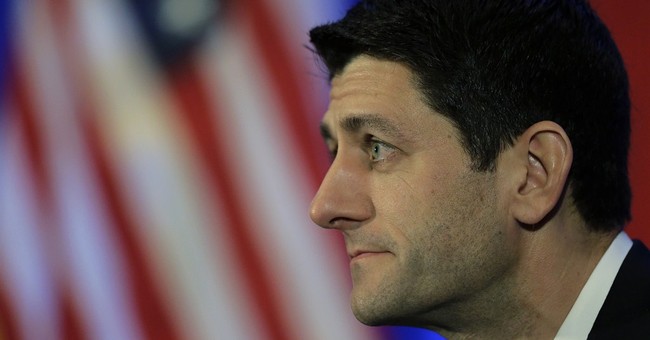 There's a credible political argument that Republicans shouldn't touch immigration reform until after the midterms. This view has been articulated by everyone from National Review's editors to Joe Scarborough. There's no point in tearing the party apart (again) in advance of what should be a very favorable election cycle. And yet, House Republicans leaders are expected to release a "statement of principles" for action in the coming days. Nothing's been made public yet, but we've heard some murmurs about what it may entail, including a path to citizenship for DREAMers -- and an immediate "probationary" path to legal status, but not citizenship, for others. Paul Ryan appears to have confirmed those details in a recent interview:


Ryan confirms GOP “principles” will include legal status for the 11 million, but he also says this will be a ”probationary status” to make sure the 11 million will not be “preferenced over people who did follow the laws.” It’s important to have confirmation that there will be a way out of the shadows. But the probationary period idea is problematic. Details will matter, but it would probably allow for people to get the right to work up front, but they could be kicked off of probationary status if certain security benchmarks aren’t met. Advocates see this as bad policy: Why would undocumenteds step forward, if they know they can lose work status and get deported later because of nothing that they did, but only because Washington failed to decide certain metrics had been fulfilled? However, Ryan also says the undocumented will be allowed to work as part of “probationary” status before security benchmarks are met. “You can be on probation,” Ryan says, “while the border is being secured.


Allahpundit answers Sargent's question, and he's surely correct: Congress will never, ever muster the political will to rescind "provisional" normalized status, no matter how ugly the border situation may get. So "provisional" equals "permanent," for all intents and purposes. Thus, the House version of reform fairly closely resembles the broad outlines of the bill passed overwhelmingly by the upper chamber in June. One key difference is permanent legal status vs. citizenship. One presumes that legalized immigrants would eventually be able to apply for citizenship through normal channels, but a "special path to citizenship" won't be a part of any House bill. This distinction may assuage the fears of some elements on the Right who believe "amnesty" would automatically gift Democrats a large number of future voters. The central similarity between the two legislative offerings is the sequencing. Based on Ryan's description, it sounds like illegal immigrants will be granted legal status on a "probationary" basis, contingent on certain border security benchmarks being met in the future. In other words, mass legalization first, then border security requirements. Back to Allahpundit:


Solution: No one comes out of the shadows until the border’s secured. The status quo on legalization holds in the meantime. There’s no rational reason why a country needs to make concessions to illegals before, or concurrent with, strengthening its borders, just as there’s no rational reason to think the GOP would use the security trigger to delay legalization ad infinitum.


A large majority of Americans are in favor of a path to citizenship (or at least legal status) for illegals who haven't committed other crimes, who learn English, and who pay fines or back taxes, etc. A equally large majority is opposed to opening the floodgates until after the southern border is secure. That's the Labrador approach. It's common sense, and it's popular. As you contemplate that, remember that the Senate bill included a costly "border surge" that (according to the CBO) would only reduce the flow of unauthorized immigrants by 33 to 50 percent. I'll leave you with Marco Rubio blaming the Obama administration's lawlessness for conservatives' skepticism over reform. He makes a fair point, but the same logic applied back when he was supporting the flawed 'Gang of Six' bill. Yes, he argued that the legislative language tied the White House's hands, but unambiguous legislative language hasn't stopped them before: